Building Justice: Racism in NYC’s Housing Market is not just a Black-and-White Story

By Christopher Kui and Lydia Tom. 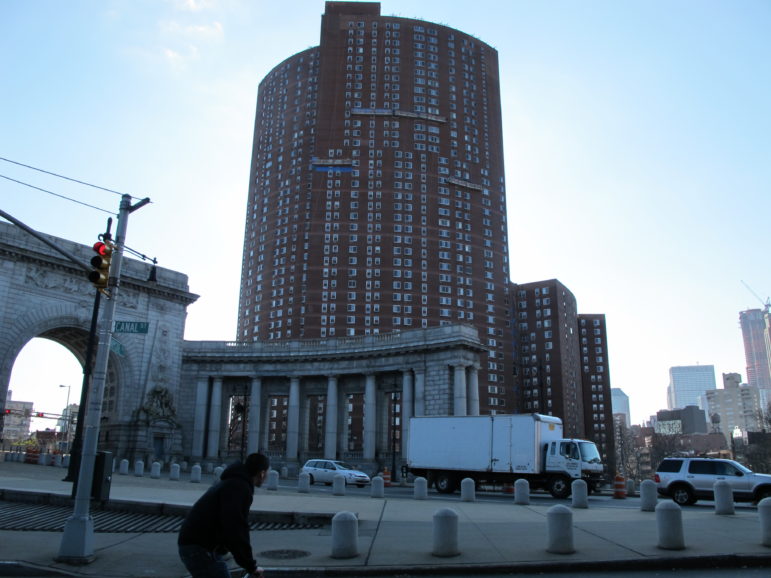 An early battleground: Confucius Plaza in Manhattan, where a coalition of Black, Latino and Asian groups protested hiring practices.

A cascade of crises is forcing America to confront the racism of its past and present—from overt acts of hate to subtler injustices that shape our society. Over 16 weeks, City Limits and Enterprise Community Partners will feature prominent New Yorkers’ views on how race and housing policy intersect to create a legacy each of us must confront, and the way forward we should take together. These are not necessarily views we endorse. But they are views we fully believe are important to share with each other. Here is the sixth post in our series. Read the rest here.

The complex history of race in America, including how it intersects with housing, has never been simply black and white. Some of the country’s first “sundown towns,” all white towns in which people of color were not welcome to live or even be seen after dark, began in the late 19th century on the West Coast first against the Chinese. Only after Chinese families were allowed back into towns with increasing urbanization were the first “Chinatowns” created, purposely designed as racially segregated communities. As we continue to fight against racism, inequality, and a lack of resources, people from all backgrounds must stand together.

In 1974, a group of like-minded residents formed Asian Americans for Equal Employment to protest discriminatory hiring practices in the construction of the federally financed Confucius Plaza housing complex in Manhattan’s Chinatown. The private developer refused to hire Asians and other minorities. Six months of unrelenting protests in Chinatown by Asians, as well as Black and Latino groups, culminated in a stunning civil rights victory. The developer agreed to hire 27 minority employees including Asians, demonstrating the power of community organizing and the need for multi-racial coalitions for social justice and economic prosperity for all.

The protests over Confucius Plaza led, ultimately, to the founding of Asian Americans for Equality (AAFE), which got its start advocating for equal access to things like housing. As we saw landlords taking advantage of immigrants living in terrible conditions, we began providing housing alternatives ourselves. We knew that housing was a key component to improving the lives of people in the community and lifting up the neighborhood itself. We developed the city’s first Low-Income Housing Tax Credit property, Equality House. Although AAFE has roots supporting Asian Americans and helping to provide housing, we knew our work had to reach beyond our neighborhood, beyond the Asian-American community, and beyond housing.

These early battles at the intersection of race and housing within the Asian-American community are identical to those fought by other minority and immigrant groups. All people want the same thing for themselves, their families and their communities – jobs that pay a living wage, decent affordable housing, good schools, access to high quality affordable health care, and safe streets.

Using identity politics that ultimately divide and pit minority, immigrant and working-class white communities against each other is a self-defeating strategy in which, in the end, everyone loses. Instead of viewing each other as competitors for the same resources in an ever shrinking pie, we must band together to get the resources our communities need. Struggles to preserve the cultural integrity of minority and immigrant communities can at the same time be inclusive of “others” and do not have to pit underserved and marginalized groups against one another.

One example of overcoming these divisions played out in our own backyard. Historically, there have been tensions between the Asian residents of Chinatown and the primarily Latino residents of the neighboring Lower East Side, tensions which were exacerbated when both neighborhoods began to be redeveloped and residents feared displacement. The non-profit community combated these tensions by ensuring that programs and services, including affordable housing, small business development and tenant advocacy, were offered to and utilized by all residents across neighborhood lines. Our challenge as community groups is to fight not only for our own neighborhoods, but for all people.

That is why AAFE joined Stabilizing NYC, a coalition of fourteen multi-racial and multi-cultural neighborhood-based organizations from throughout the city’s five boroughs. This coalition is a legal service provider and housing advocacy organization dedicated to combating tenant harassment and preserving affordable housing for the New Yorkers who need it most. The potential power of such a coalition is not only in campaigns for citywide reforms, but also in local organizations’ ability to mobilize support from partners around the city for their distinct local issues and struggles. The members of Stabilizing NYC have come together to present a united, citywide front against predatory equity’s threat to affordable housing, in order to build on our collective experience and organize for action.

Over the years, we have also come to understand the importance of engaging the community in broader inclusive, participatory community planning efforts that address the intersection of race, housing, local economic development, education, health, and food access. In addition to providing housing and social services, there is a critical need for opportunities to create wealth through access to capital for home-ownership and small business. Given the history of racial redlining and predatory lending, support is especially needed for minority, immigrant and women-owned businesses.

Community development work must go beyond the house by house, business by business and project by project approach to take a more holistic view of the community as a whole. Community development organizations and the social movements that helped give birth to many of them have nearly 50 years of collective history and experience dealing with the problems created by institutionalized racism, including disinvestment that has led to concentrated poverty and displacement. We must continue to build successful multi-racial coalitions to fight for meaningful change and progress. This will not be an easy task given the huge economic challenges facing low-income communities of all races and the community development organizations dedicated to serving them, and the recent resurgence of racial tensions. Yet we must support reinvestment for all communities through multi-racial community development, and coalitions are critical if we are to be successful in expanding the pie for all so that the needs of our most vulnerable people are no longer pitted against each other.

Race has always been one of the most paramount issues used to divide our communities, particularly during periods of economic uncertainty and hardship. Given that today nearly half the country is either poor or near poor, the challenge often seems daunting. Yet, by working together in multi-racial coalitions to fight the ongoing institutionalized racism in housing and all areas of society, community development organizations can bring people together so that they truly represent all those in need while at the same time enabling people of different backgrounds to get to know one another as human beings. For, in the end, it is a lot harder to hold onto stereotypes, prejudices and bigotry towards people when you actually work with and know them.

***
Christopher Kui is executive director for Asian Americans for Equality. Lydia Tom was a founding member of AAFE, currently serves on the board and is a senior advisor at Enterprise Community Partners, Inc.