UrbaNerd: What Kind of Monster Puts a Fork in the Paper Recycling? 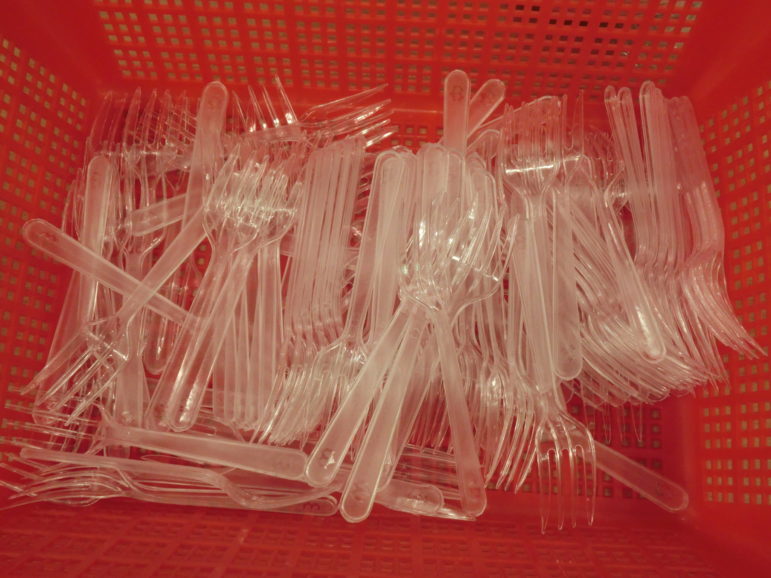 These are plastic forks. And they always will be if you don't recycle them properly.

New York City is way better than most places except when it comes to recycling. San Francisco posts an 80 percent recycling rate, roughly twice New York’s “capture” rate of 44 percent. In part, that reflects recent changes in the city’s recycling policy: The addition of plastic dishware as a recyclable good in 2014 means that the volume of recyclable material has increased, but public awareness has not followed suit. But, good old fashioned sloppiness is also an element of the story.

The city’s Independent Budget Office is out today with a look not just at how much of which recyclable products get recycled but also where the remnant ends up.

For instance, only 28 percent of aluminum cans make it to the recycling bin or bag, while 70 percent end up in regular trash. But 75 percent of green glass gets properly recycled, while the rest ends up in black bags. Cardboard mostly makes it where it’s supposed to go: 71 percent goes into the paper recycling bag.

But only 5 percent of plastic dishware gets recycled. Most of it goes into regular refuse.

Strangely enough, 2 percent of aluminum cans and 1 percent of plastic dishware end up in paper recycling. (Friend A: “Hey, I need to write down a phone number. Do you have any paper?” Friend B: “No, but I have an empty Coke can and a spork. Will those work?” Friend A: “Sure. Thanks so much.” Friend B: “You’re welcome. I love you, man.”)

Snarky fake dialogue aside, recycling can be challenging. I mean, it still feels weird to put a milk carton, which feels like paper, into the metal/glass/plastic bin, doesn’t it? That’s why the city has set a long-term goal of moving to single stream recycling. As Cole Rosengren reported here last year:

Under single-stream, residents can mix metal, glass and plastic directly in with paper products to be sorted later.

“If we take an important step out of the process for the public, it’s one less step for them to do in their kitchen or the garage and we can shift it to the people whose job it is. I think that’s a fair thing to do,” he says.

Regardless of citywide numbers, recycling rates have always varied among community districts—with participation highest in Manhattan and lowest in the Bronx—for reasons which even academics can’t quite explain.

A 2005 study by two CUNY professors at the time, called “Optimizing recycling in all of New York City’s neighborhoods,” found that cultural differences and awareness about the program in lower-income areas wasn’t the issue. Instead, it found that some lower-income families produced less trash to begin with and that many of their buildings lacked proper recycling areas.