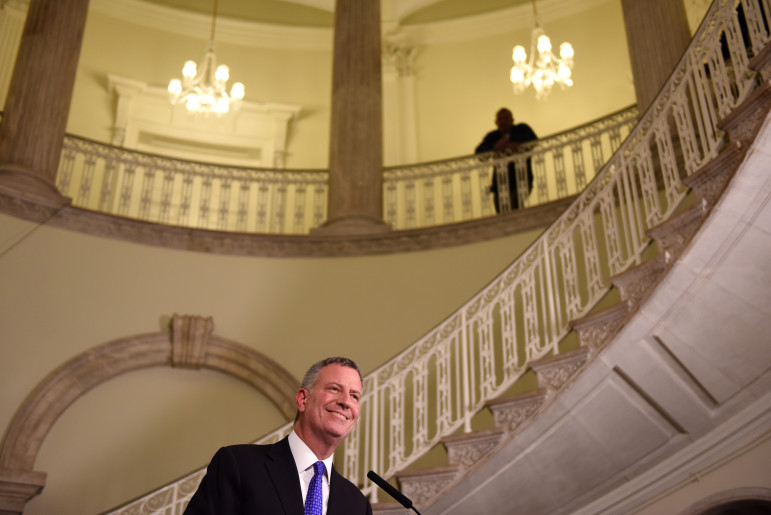 Mayor Bill de Blasio learned early in his term that delivering a message behind closed doors tends to annoy people on the other side of the threshold. His off-schedule, no-press-allowed talk to the American Israel Public Affairs Committee just 24 days into his mayoralty was pretty much the end of his honeymoon.

Today on MSNBC’s Morning Joe, the mayor and loyal Hillary Clinton surrogate was asked whether the former secretary of state should insist that the public get to see transcripts of the controversial, highly paid speeches she made to Wall Street firms. Here was the exchange:

Mayor de Blasio: Well, Wall Street needs reform to be what it should be in this country – I think that’s the bottom line. And Hillary said it very clearly, we cannot have a country where Wall Street can create the kind of problems that it did almost a decade ago. We need clearer restrictions, clearer balance – and that’s what her platform calls for. So, Wall Street plays a productive role if Wall Street cannot end up putting us into crisis again. And we’re still not there – we don’t have the right approach to reigning in the excesses of Wall Street to this day. And I think it’s important to say that out loud, by the way. I’ve said it to Wall Street folks – they need to be a part of that reform and that change for the good of Wall Street and good of the whole country.

Brzezinski: Having said that, and hearing what you’ve just said about Wall Street, and what needs to be done as we move forward, should your candidate relate the transcripts of the speeches that she made to Wall Street, to big banks, and received a very big check in return?

Brzezinski: But doesn’t this cut into the trust issues if we can’t see what was said behind closed doors? How do we know that will happen? Isn’t it raising that question and saying she’s got something hide – she says one thing behind closed doors and something else to the public when she’s running for office. Shouldn’t she release the transcripts?

Mayor: My blunt view is I care what she says on her platform. I really don’t care about –

Mayor: No, listen to what I’m saying.

Mayor: I don’t care about those speeches. I care about what’s in her platform. Her platform would reign in Wall Street excesses more even than Bernie Sanders would, and a lot of progressives have said that, and Paul Krugman’s said that. She has the sharpest platform for addressing the Wall Street crisis that any candidate’s had since the Wall Street crisis, and that’s out loud, and that’s what she’ll be held to. That’s what matters in this election.

Clinton’s platform is certainly worth reading, but, the mayor’s prediction aside, it might not be all “she’ll be held to.”

After all, as was the case with de Blasio’s remarks to AIPAC, recordings and transcripts of what were meant to be closed-door conversations do have a way of coming out.

And as Mitt Romney found out when his infamous “47 percent” comment surfaced during the 2012 race, it’s not just the content that kills you. It’s the timing.