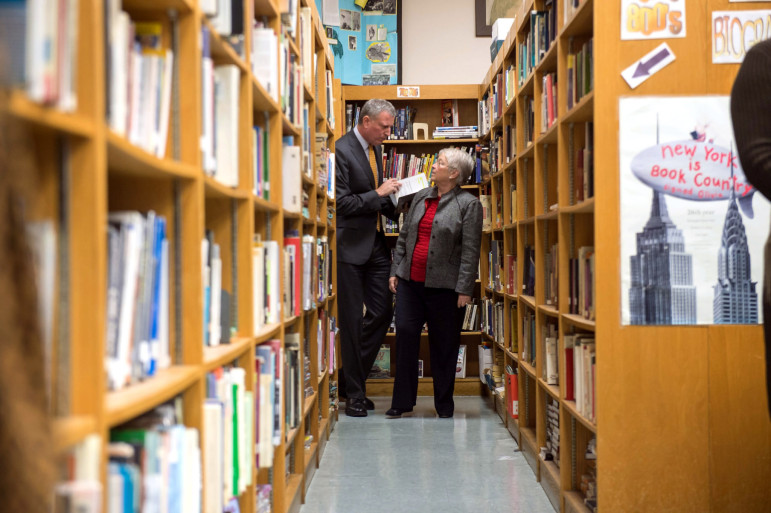 Chancellor Carmen Fariña seen with the mayor at a January 2015 school visit. Critics of the closure of SLT meetings contend that the policy could put some federal school funding at risk.

There are the days when the New York City Department of Education’s efforts to reach out to families seem unrelenting, from urging parents to show up to PTA meetings, back-to-school nights, parent teacher conferences and school events to publishing 40-page glossy handouts like Achieve NYC, which assures families that schools are there to “engage parents and families in every aspect of school life.”

But the engagement only goes so far: “Please note that, at this time, SLT meetings are not open to the general public (i.e., people who are not members of the school community) or the press,” said a weekly DOE bulletin in June.

In contravention of Supreme Court Justice Peter H. Moulton’s decision in April ordering the DOE to maintain open access to School Leadership Team meetings, the DOE has ordered its principals to keep the public, and the press, out of the meetings.

SLT meetings are the places where parents elected by their peers as well as the principal and PTA president and teachers decide on the school’s education policy, go over the school budget and discuss school environment issues like bullying, safety and extra curricular activities.

Under the DOE’s own guidelines, there must be 10 to 17 members on an SLT, including an equal number of parents and teachers as well as the principal and, in some instances, a representative from a community based organization.

After years of acknowledging that SLT meetings come under New York State’s Open Meetings Law, last year the DOE tried to stop both a retired teacher as well as a reporter from attending the meetings. In late 2014, Public Advocate Letitia James joined a group of parents and nonprofits suing the DOE to keep the meetings open. In April, the judge found for the plaintiffs.

The city has said it is considering an appeal of the decision, and in the meantime, in an email in June to all principals, ordered them to keep SLT meetings closed to everyone except SLT members and members of that school’s community (i.e. parents of children in the school). Whether that is legal or not is a dispute within the larger dispute: The DOE says the judge’s order is stayed pending the resolution of the appeal, but its opponents contest that.

The DOE is going against its own longstanding practice of keeping the SLT meetings public. The DOE’s Division of Family and Community Engagement’s says that “SLT meetings are open to the public. Teams may find that observers from within the school community or beyond wish to attend the SLT meetings.”

Says Mark Ladov of the New York Lawyers for the Public Interest, which joined the lawsuit, “The whole point is that the chancellor doesn’t want people to be at meetings where controversial things come up. And, in fact, that’s the whole point of the transparency law – so that people do know about controversial things and can learn about them and discuss them and argue them.”

For Leonie Haimson, founder of Class Size Matters, and another party to the lawsuit, its déjà vu all over again. Recalling former Schools Chancellor Joel Klein’s efforts to turn SLTs – which determine school educational goals and help develop budgets – into strictly advisory bodies, Hamison said parents fought back, only to be undone by the current administration: “Here is an administration that claims to care about parent input and then does everything as far as it can to block it.”

Parents are not barred from SLT meetings. Under guidelines for the federal Title I funding that many schools receive, all parents with children in a Title 1 school are entitled, in the DOE’s own language, “to attend all SLT meetings,” whether they are members of the SLT or not. One percent of the federal funds to Title I schools are earmarked for parental involvement, and if the parents were blocked from being involved, that money would be put in jeopardy.

Editor’s Note: This story was altered after initial publication to emphasize the fact that parents are still allowed into SLT meetings in their children’s schoo under current DOE policy.