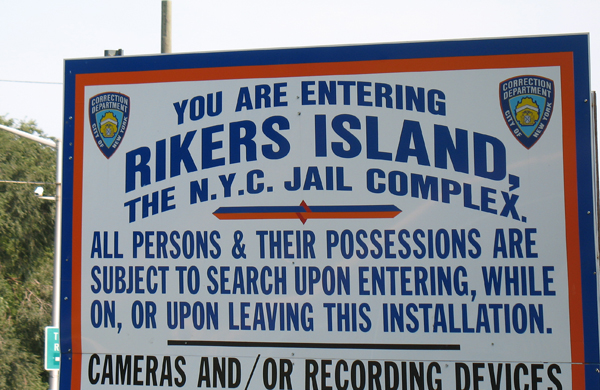 A move to restrict visiting rights on Rikers Island—billed by the Department of Correction as a necessary step to control violence—that faced opposition from legal rights groups went nowhere Tuesday at a meeting of jail regulators.

The Board of Correction decided to hold off on the proposal pending further study.

The Board is considering whether to again alter the “minimum standards” that govern inmate treatment in city jails. The Department of Correction, which the board oversees, says that since “visits are also a known and repeatedly used entry point for many to introduce contraband of all forms” has said it wants broader rights to deny visits and prevent physical contact during visits.

DOC—reacting to what the Mayor’s Management Report calls “a 52 percent increase in the number of slashings and stabbings during the first four months of Fiscal 2015″—earlier indicated it wished to amend the rule on contact visits from this language:

Physical contact shall be permitted between every prisoner and all of the inmate’s visitors throughout the visiting period, including holding hands, holding young children, and kissing.

A letter sent Monday by a coalition of other groups including the Bronx Defenders, the Osborne Association and the Fortune Society began with the critique that “the request for the Department to establish the virtually unfettered ability to limit and deny specific visitors, and separately to restrict visits, including limiting contact between children and their parents is unfounded in fact /data.”