How NYC Can Learn from Other Cities’ Work Toward Zero Waste 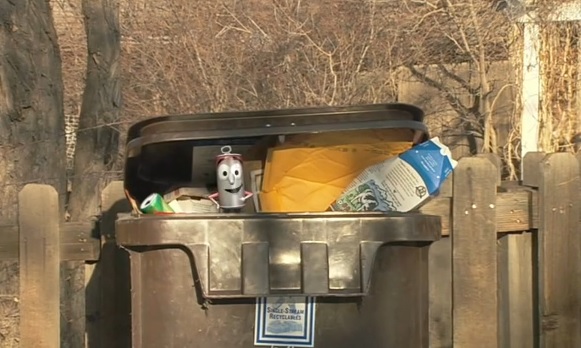 Yes, that's a talking aluminum can, and it's telling residents of Boulder County, Colo., about steps to achieve the local zero-waste goal.

Seattle was one of the first cities to implement Zero Waste programs. It has banned non-recyclable or reusable items such as plastic bags and take-out containers. It also has eliminated all phone books to reduce paper waste. Seattle does curbside composting, using a commercial composting plant that takes dairy, meat, bones food waste, soil and paper and turns it all into fertilizer. Movie theaters and fast-food restaurants are required to provide not one but three refuse bins for customers: waste, compost and recycling. And Seattle’s most recent ordinance requires commercial buildings to compost as well, as of July 1st there will be a $1 fine for every resident not composting. 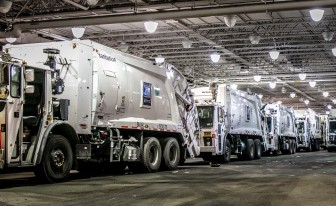 NEW YORK'S TRASH CHALLENGE:
This sidebar is part of a series about the challenge New York City faces in reducing the environmental and economic costs of its municipal waste. Click here to read more.

Seattle is on a “zero waste” path but is not actually aiming to produce no waste, according to local activist Heath Trim of Zero Waste Seattle, because achieving such a goal would require incineration, which is frowned upon by the Zero Waste community. Seattle aims to get its waste to the lowest feasible level by 2025. It still has a landfill that it uses for items like baby diapers that can neither be recycled nor composted. According to the municipal government, Seattle uses the methane from the landfill to generate energy. Overall, the city has a recycling rate estimated at between 60 and 70 percent. It is one of the better cities to use as a comparison for New York City since it has a high urban density, according to Eric Lombardi, who was the director of Ecocycle—a zero waste advocacy organization—for 25 years and recently stepped down to start the Ecocycle International.

Boulder, Col., has a pay-as-you-throw program; composting and recycling are free but waste is charged by the size of the container. Boulder passed an ordinance in 2001 that set conditions for haulers’ licenses that allows haulers to make their own prices and rates as long as recycling is provided for free and they have variable rates based on container size. In 2001, Boulder’s recycling rate was at 17 percent. It jumped to 50 percent by 2008, according to city statistics. Boulder also aims for “zero waste” 2025.

Outside the U.S., there are other examples of ways cities and countries have approached the goal of zero waste. The European Union implemented a Zero Waste goal in 2011. Ljubljana, the capital of Slovenia, is the European city with the best waste management: It diverted 60 percent of municipal waste by recycling and composting and generates only 330 pounds of residual waste per person yearly. The city aims by 2025 to get their diversion rate up to 78 percent and decrease the amount of residual waste to 132 pounds per person each year. The average American produces more than 1,000 pounds of residual waste per year.

It is instructive that neither Seattle nor Boulder relied on a change in culture or attitudes to achieve its high recycling rate.

“Making people participate is difficult,” says Lombardi. “By implementing a pay-as-you-throw system [as in Boulder}, people end up saving money by not putting waste into landfills. They need to put a price on it. Landfills take up space and cause pollution.” Seattle, for instance, has made it illegal to not recycle or compost, with fines of $1 per bi-monthly bill for households that slip up and penalties of up to $50 for businesses and apartment buildings that run afoul of the law.