Single-Stream Recycling: Simple for Residents, Complex for the City 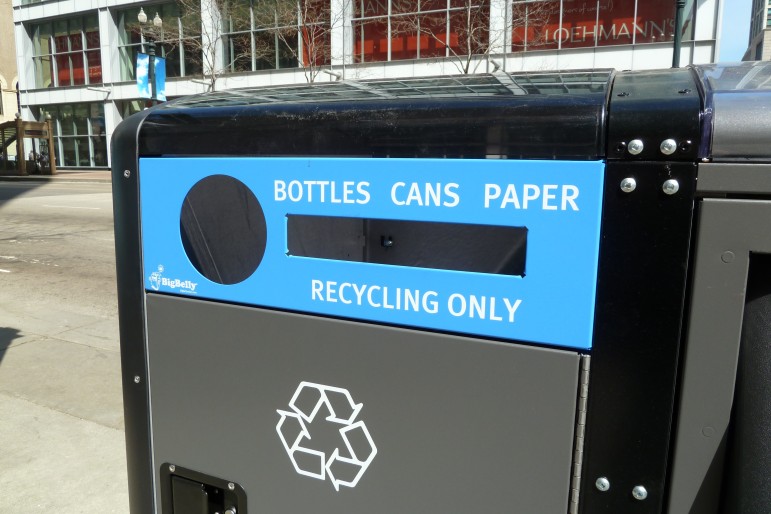 A single-stream recycling container in downtown Chicago. Eliminating the separation of paper from other recyclables tends to boost participation rates but can alter the economics of recycling.

* * * *
This is the third part of our series
about the challenges facing New York’s municipal waste system.
* * * *

Over the years, changing rules and differing levels of commitment from city government have limited the potential of New York’s recycling system.

The idea of saving bottles, cans, cardboard and other materials to be recycled—rather than using natural resources to create them again—is widely understood. Separating them properly, collecting them efficiently and processing them in a cost-effective way is the real challenge.

Ever since it became law in 1989, recycling in New York has been a struggle. In 1996, Mayor Rudy Giuliani called the recycling law “absurd” and “irresponsible” while fighting a lawsuit that alleged he wasn’t doing enough to enforce it. Mayor Michael Bloomberg suspended glass and plastic collection in 2002, believing that it would save money. This was never proven true and rates haven’t reached their pre-suspension levels since the full program was reinstated in 2004.

The rate of residential material diverted from the city’s waste stream peaked at around 20 percent in 2001 and has remained stagnant between 15 and 16 percent in recent years. According to a 2012 report by the EPA—the most recent data available—the national recycling rate is 34.5 percent.

Now New York City is poised to make a bold step toward better recycling—by converting to a single-stream system by 2020. The move is meant to increase participation by making the process simpler for residents. But it’s a complex change that could again alter the economics of New York’s recycling. 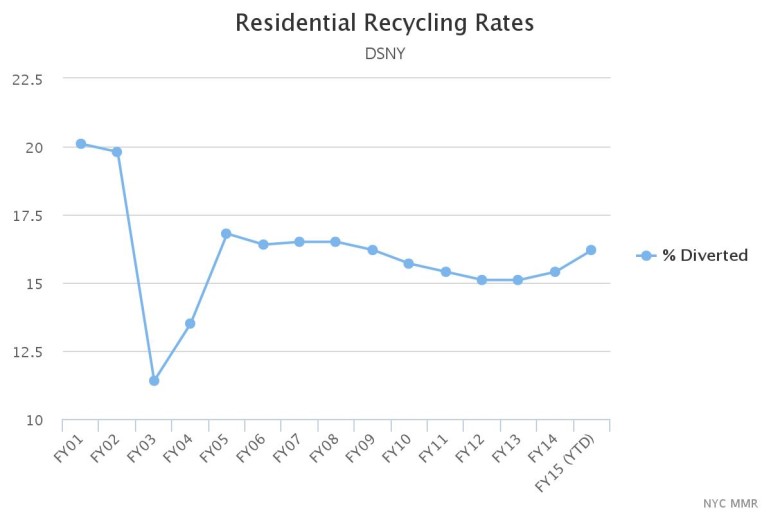 In 2013, DSNY expanded the list of acceptable recyclable materials to include “rigid plastic,” such as yogurt containers and shampoo bottles, and has seen a slight increase in diversion rates since then.

Single-stream is the next step in that direction and is meant to take the guesswork out of separation. Under single-stream, residents can mix metal, glass and plastic directly in with paper products to be sorted later.

“If we take an important step out of the process for the public, it’s one less step for them to do in their kitchen or the garage and we can shift it to the people whose job it is. I think that’s a fair thing to do,” he says.

Regardless of citywide numbers, recycling rates have always varied among community districts—with participation highest in Manhattan and lowest in the Bronx—for reasons which even academics can’t quite explain.

A 2005 study by two CUNY professors at the time, called “Optimizing recycling in all of New York City’s neighborhoods,” found that cultural differences and awareness about the program in lower-income areas wasn’t the issue. Instead, it found that some lower-income families produced less trash to begin with and that many of their buildings lacked proper recycling areas. One example is NYCHA: The Natural Resources Defense Council announced Wednesday that it was taking steps toward suing the housing authority for failing to provide recycling facilities for its 400,000 residents.

One of the professors who wrote the 2005 study, Dr. Maggie Clarke, says that a comprehensive promotional effort is key. “Education is not just putting together a brochure or the occasional billboard ad. There’s a lot more to it,” she says.

Clarke says looking at participation through the lens of behavioral science is crucial. Studies have shown that people choose to participate in environmental activities to different degrees for different reasons. Factors such as moral obligation, financial burden, peer pressure, convenience and apathy all come into play. Finding ways to target these groups and break down their different barriers is key to getting high participation.

Single stream recycling would presumably make the process easier, but it may not change the minds of those who don’t care about participating in any kind of program.

Whether or not it will help raise recycling participation rates, some academics are skeptical about what single stream will mean for the quality of materials collected.

One tricky question will be what this means for the city’s processing facilities. The recently built SIMS Municipal Recycling facility in Brooklyn is equipped to handle metal, glass, plastic and paper, so it could adjust fairly smoothly to a single-stream approach. On the other hand, Staten Island’s Visy Paper Mill could have a harder time adapting to the new system.

The Department of Sanitation (DSNY) is currently collecting approximately 1,700 tons of metal, glass, plastic and paper per day. Recycling metal, glass and plastic saves the city money: According to analysis of the proposed Fiscal Year ‘16 budget by the Citizens Budget Commission, the net cost to collect metal, glass and plastic will be $75 per ton as compared to a minimum of $90 per ton for exporting to landfills. Crucially, however, when it comes to paper, the city actually makes money. The city is projected to earn $11 per ton of paper collected.

The value of each resource fluctuates—plastic in particular has been affected by low oil prices—but paper is one of the most consistently valuable commodities for the city. For that reason, there is some concern about how paper will fare when it’s thrown in with old soda bottles, soup cans and pickle containers.

Carl Zimring, an associate professor of sustainability studies at Pratt Institute and author of “Cash For Your Trash,” notes that “paper stock is highly vulnerable to degradation and loss of value.” Zimring says other cities have successful single-stream programs, but it’s not a perfect system. Paper already becomes harder to recycle if it’s contaminated with grease or other residue. Mixing it in with a bunch of sticky bottles and cans could make that even more challenging.

Seattle has been using single stream recycling for many years and sees it as a success. The city currently has a 56 percent diversion rate—including commercial waste. Hans Van Dusen, solid waste contracts manager for Seattle Public Utilities, says that mixing the materials hasn’t been a noticeable issue and residents have been receptive to the program.

“I think the vast majority want to do the right thing. It’s just helping them get there,” he says. 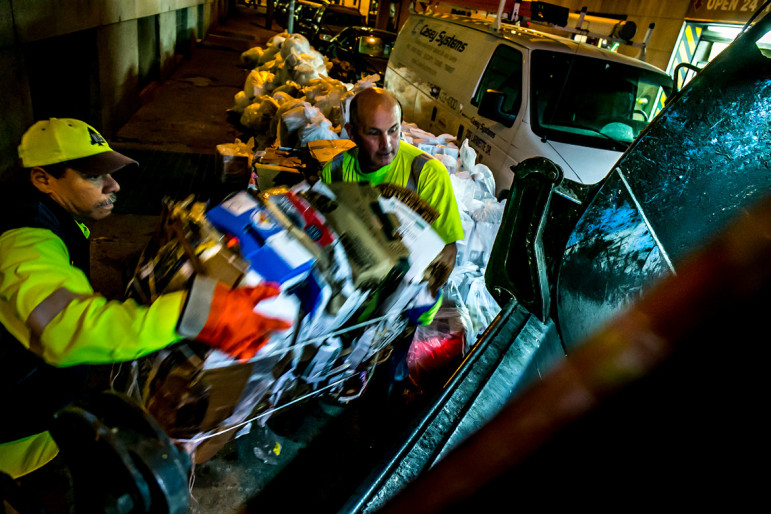 The citywide recycling numbers don’t include recycling by businesses, whose refuse is picked up not by the Department of Sanitation but by private carters. The commercial diversion rate is believed to be around 25 percent, though according to transfer station reports filed with the state Department of Environmental Conservation they could be much lower.

Amy Marpman, chief operating officer for a sustainability consulting firm called Great Forest, helps office buildings set up recycling programs and manages their contracts with private carting companies. She says that even under the best circumstances, it’s impossible to divert everything from the trash can.

“You’re not going to get 100 percent compliance anywhere, ever,” she says.

Even if compliance by individual tenants is good, Marpman says a big challenge is coordinating with people on different floors to make sure the waste stays separated by the time it reaches the basement.

From there it’s up to private carting companies, such as Mr. T Carting, to take the material to a proper recycling transfer station. Tom Toscano, the company’s chief financial officer, says that paper and cardboard makes up the majority of material he collects from businesses. Cardboard is the most lucrative commodity and often a target for theft.

Toscano says he doesn’t send out separate trucks to collect bags with metal, glass or plastic—even though restaurants are required to set them out on the curb—because some beverage distributors take back bottles for reuse. Reports from transfer stations affiliated with Mr. T Carting verify that paper makes up the majority of material the company separates for recycling. The bulk of remaining recyclables that haven’t been separated from standard waste either ends up in a landfill or gets incinerated. Toscano says it’s in his best interests to recycle as much as possible.

“Every ton that we pull out of the waste stream is a ton that we don’t have to pay to get rid of,” he says.

As DSNY explores a single-stream approach, all of these factors will be under consideration. Bridget Anderson, the city’s deputy commissioner for recycling and sustainability, says the de Blasio administration is still in the early stages of figuring out the details of single stream. But what it will permit, she says, is “operational efficiency.”

Approximately 400 of DSNY’s 2,000-truck collection fleet is made up of dual-bin trucks that can handle multiple streams at once. Converting to single stream would allow DSNY to use any kind of truck for collecting recyclables and potentially decrease mileage by not having to drop different material at different transfer stations.

Perhaps more importantly, it may also help DSNY get its hands on more of the recyclable material it currently loses to landfills or sends to be incinerated. While attention is normally paid to diversion rates—which are calculated based on the volume of recyclable materials diverted from the total stream—capture rates are a more telling figure. They tell us how much potentially recyclable material ends up in the recycling system.

Anderson says the city averages about a 50 percent capture rate for residential waste, meaning it’s only collecting half of the potential material out there. The goal of single stream is to hopefully increase this number. The city is also aiming to increase its collection of organic material for composting. But neither approach will get the city all the way to a “zero waste” goal.

Even that rate would be a marked improvement over where the city has been, and getting there will be challenging. In the short term, DSNY has set a goal for 24 percent diversion rate by next July.

In order to reach “zero waste” as outlined in the OneNYC report, DSNY will also have to increase promoting its drop-off sites for other items—such as textiles and e-waste—and ramping up the curbside organics collection program. A new “B.Y.O. Bag” campaign was also launched recently to encourage reusable bags for shopping trips. Plastic bags are not easily recyclable and have low market value. Some City Council members have called for a tax on such bags, but OneNYC was unclear on whether City Hall supported that push.

9 thoughts on “Single-Stream Recycling: Simple for Residents, Complex for the City”