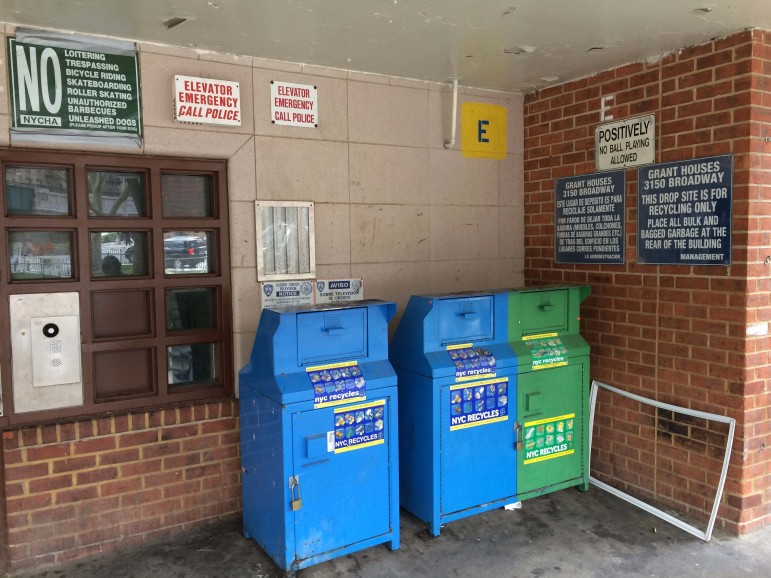 While most NYCHA residents have few options for recycling, people at the Grant Houses in Harlem have a better shot at complying with recycling laws thanks to tenant activism.

Residential recycling became law in New York more than 25 years ago, but nearly 5 percent of the city’s population has never had consistent access to the program. NYCHA’s public housing complexes have long been considered impossible to recycle in because of their density and limited space.

According to the mayor’s recent OneNYC report, “NYCHA will invest $15 million to create new recycling centers and will train residents and staff on the importance of proper recycling” in 2015. “In NYCHA developments, small and inconvenient recycling bins have gone unused for much of the last decade,” the report acknowledges.

The recently released NextGen NYCHA plan promises that “all NYCHA developments will recycle by the end of 2016” and says there will be an effort to “engage and educate residents and staff to maximize recycling efforts.”

“NYCHA recently announced its intent to add recycling bins outside of its buildings by the end of the year,” the environmental organization said in a statement. “However, the authority has made similar promises before, this promise is unenforceable, and planning efforts to-date have not sufficiently engaged building tenants concerned about recycling.”

“The de Blasio administration has made clear that access to recycling for NYCHA residents has been totally inadequate for too long – which is why we are already tackling this issue head on,” says administration spokeswoman Amy Spitalnick. “As announced last month in OneNYC, NYCHA – in partnership with DSNY – will install recycling bins at all developments, part of the Mayor’s ambitious but necessary goal of sending zero waste to landfill. NYCHA has already made clear that this will be implemented across developments by the end of 2016.”

Despite the obstacles to recycling in public housing right now, one group of residents has been running a recycling program at the Grant Houses in Morningside Heights for years.

Officially founded in 1994, though active long before that, the Sanitation Coalition is a group of local residents from NYCHA and neighboring co-op buildings who work to clean up their neighborhood in a variety of ways. Before they started the program in 2006, recyclables weren’t being properly separated and participation was low.

“Recycling bins had everything in them, including the kitchen sink,” says Joan Levine, a retired teacher who serves as the group’s co-chair.

With funding from the City Council, they bought special animal-proof recycling bins to place in front of buildings — the same kind used to keep bears out in Canadian national parks — and began holding brief education sessions on every floor. It took many months to knock on the nearly 2,000 doors in Grant Houses’ nine buildings, but over time the Sanitation Coalition team began to see results.

“We really felt like we had the key,” says Levine.

She says NYCHA groundskeepers told her that buildings which used to generate 25 bags of garbage per day started producing just 15 after the recycling program began. All people needed was a refresher course and a feeling of inclusion.

Now, almost 10 years after the program began, residents say that NYCHA staff is mixing separated recyclables with regular garbage and the program has declined. NYCHA has promised a revamped recycling system, but Levine says that representatives haven’t been receptive to the Sanitation Coalition’s methods.

“I’m afraid that the whole program here will go up in smoke,” she says.

Grant Houses was one of multiple complexes mentioned in NRDC’s letter to the agency’s chairperson on Wednesday. NRDC estimates that upwards of 1,000 tons of NYCHA recyclables go to landfills every week.

3 thoughts on “NYCHA Recycling Under Scrutiny”