Skelos Charges: An Indictment of 421-a? 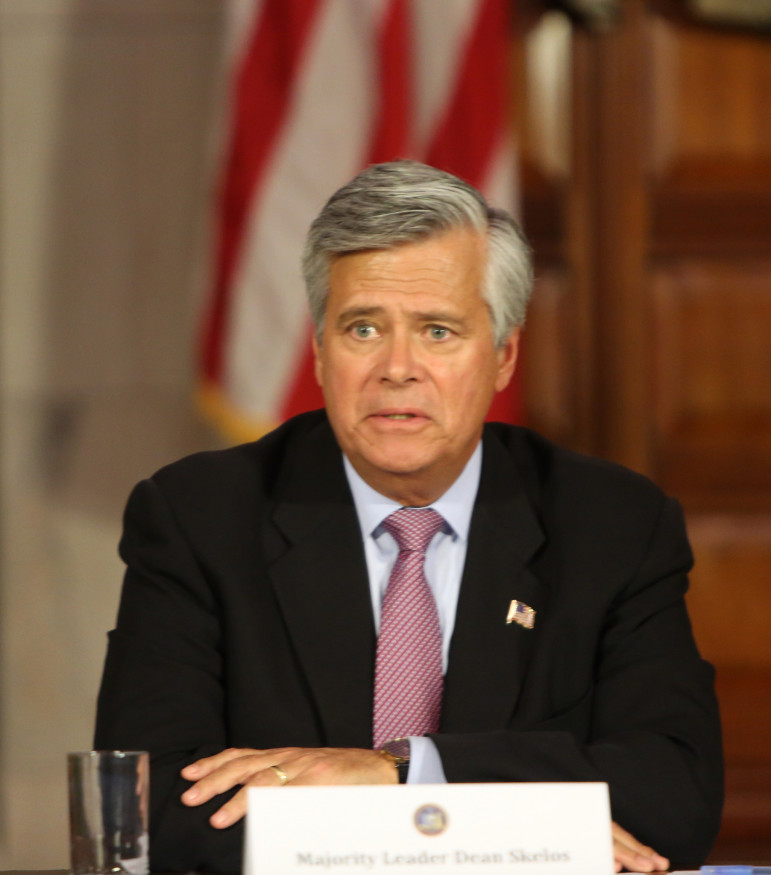 Can you imagine how jealous other sections of New York State’s real property tax law must be of 421-a? Not only is its name actually known by a surprisingly large number of people, but it figures in this weird love-hate relationship for city policymakers, who acknowledge its deep flaws and in the next breath praise its importance to housing creation in the city. And now it plays a starring role in a federal indictment of one of the most powerful men in New York State.

Among the charges against Senate Majority Leader Dean Skelos and his son Adam is that the elder Skelos squeezed a prominent development company—everyone knows it’s Glenwood Management, although the indictment doesn’t say so—to pay Adam for work he never did and arrange for another company, an “environmental technology firm,” to hire him, all so Skelos would favor the the developer in handling issues of state law that affected real estate in New York. The relevant sections of the federal complaint (mere allegations at this point) are below: 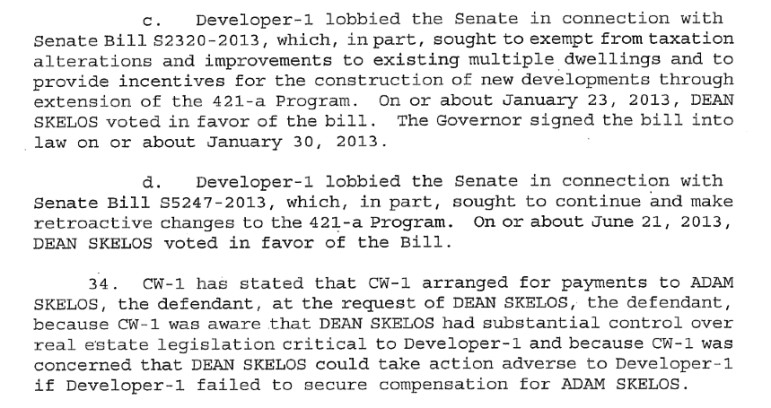 The indictment mentions four pieces of legislation, two acted on in 2011 and two from 2013. Only one of the 2011 bills became law: the bill bill 5856, un-lovingly referred to as “the big ugly” that rolled into one legislative meatloaf a property-tax cap, rent-regulation renewal and an extension of the grace period for developers who wanted to enjoy an earlier version of 421-a tax benefits and escape tougher affordability restrictions that were supposed to kick in.

The other 2011 bill was an attempt to restrict legacy rights of tenants in rent-regulation housing. It died.

In 2013, according to the indictment, Skelos also did developers’ bidding on Senate bill 5247, which would have eroded those earlier 421-a reforms. That went nowhere.

But bill 2320 did become law—and not a super-great one, according to Sen. Brad Hoylman, who complained in a statement: “The bill included a renewal of New York City’s J-51 tax abatement program without any long-overdue reforms to make it more effective and better regulated, and an extension of the 421-A tax benefits to developments in Midtown and Downtown Manhattan that will not substantively mitigate the City’s ongoing affordable housing crisis.”

For years some housing activists have been calling 421-a a “scam,” which may have sounded hyperbolic but might have been more accurate than even they knew. Now, with 421-a, the condo and coop tax abatement, the J-51 tax break and rent-regulations themselves all slated for a June date with destiny, Monday’s indictment throws a two-pronged element of uncertainty into the works: Who will be the man from the Senate when the three men get into a room in Albany to hash it all out? And whose interests will he be representing when he gets there?

One thought on “Skelos Charges: An Indictment of 421-a?”