NYC is Expanding Resources for Students’ Mental Health. But Is It Enough?

The de Blasio administration has proposed an increase in spending for student mental health initiatives, but advocates and council members are pushing for more.

Editor’s note: An earlier version of this post mistakenly cut off the end portion of this story; it has been updated to include the full article.

On April 27, buoyed by an infusion of federal COVID relief funds, the de Blasio administration and City Council Speaker Corey Johnson announced what they termed a “historic expansion of mental health supports for all schools.” Some teachers, councilmembers and advocates, however, say the administration should still go farther—particularly after more than a year of trauma and disruptive learning caused by the pandemic.

The mayor announced funding for a range of initiatives, including Summer Rising, the city’s new student summer program, a socio-emotional screening tool to assess all students, mental health resources and training for parents and all early childhood education staff, and the hiring of over 600 social workers, psychologists, and family support workers. The administration is investing federal funds to create additional community schools, which serve the holistic needs of families and students, and to restore most of the previously made cuts to existing community schools. The city has also launched the Let’s Talk NYC campaign to help teachers support high schoolers’ mental health.

These investments build on the de Blasio administration’s multi-year efforts to increase mental health support in schools through the ThriveNYC initiative, and they build upon other programs launched in the past year, such as trainings in trauma-informed practices for school staff.

The expanded resources come at a time when youth are experiencing a range of hardships compounded by the pandemic. Thousands of children across New York State have lost a parent or caregiver to COVID-19, for example. Nationwide, the number of children visiting emergency rooms for mental-health related ailments jumped in 2020.

At the City Council’s Committee on Education executive budget hearing on May 19, Meisha Porter, the new chancellor of the NYC Department of Education (DOE), named mental health as a key focus, along with academics, of this coming school year.

“As we look ahead, we know we cannot simply return to what our system looked like prior to the pandemic,” Porter said. “Our students need a school experience that is rooted in both healing and learning.”

“We are not done getting more money for the DOE,” he said.

The city has no data set that comprehensively documents the mental health supports available for each school. City Limits’ analyses identified the ways that the mayor’s plan will address existing gaps, as well as ways it falls short. The mayor and City Council must pass a finalized budget for the upcoming fiscal year this week, by the July 1 deadline.

By all accounts, the community school model has proved hugely successful, and many say that more schools must be introduced to the model, which addresses the holistic needs of students and families using partnerships with community-based organizations and by extending support beyond normal school hours. In December, the mayor committed to an additional 27 community school contracts in the neighborhoods hardest hit by COVID-19.

In an April 7 response to the preliminary budget, the Council recommended that the city invest $686 million over the next four years to turn every school in the city into a community school, starting with $190 million in FY 2022 to bring 400 additional schools to the model.

The de Blasio administration’s executive budget proposal does invest in creating more community schools, but not to the extent the Council had hoped. It uses $138 million in federal relief aid spread over four years to support the development of 100 additional community schools. These 100 schools, according to Deputy Chancellor LaShawn Robinson, will “be starting with us in September of the 2022-2023 school year.” The city also used federal relief aid to restore most, but not quite all, of previously made cuts to existing community schools for the next few years.

While encouraged by the city’s new investments, community school advocates are concerned about what will happen once federal relief funds begin tapering off—decreasing in FY 2025 and then dropping off completely.

“What’s the city’s strategy to ultimately sustain these investments in these schools—to make sure that these supports are in place for the long haul?” said Michelle Yanche, executive director of Good Shepherd Services, a community school partner.

Yanche also questioned whether the city is investing the right amount of resources to meet its goals of expanding community schools, and cited concerns with the potential underfunding of the 27 new contracts that will begin this September. Chalkbeat reported recently that despite the city increasing the number of community schools, it has also reconfigured it’s funding formula for the initiative in a way that will mean funding boosts for some but cuts for dozens of other nonprofits that have been providing these services for students.

At the Council’s budget hearing, DOE officials expressed their support for the model and explained they’d be consulting with communities as well as considering demographic factors to determine which 100 schools should be converted next. Treyger re-emphasized the need for continued attention especially to the neighborhoods hardest-hit by the pandemic.

Asked by Councilmember Dromm how the city would protect community schools and other programs from budget cuts after federal relief funds run out, DOE Chief Financial Officer Lindsey Oates said the DOE is “hoping that we can prove that these investments are working and that they’ll be baselined in the out years.” The administration is also banking on city revenue projections increasing.

Mental Health Workers in Every School

According to the de Blasio administration’s press release, the city will hire 500 school based social workers (inclusive of the 150 new hires announced in December), along with 60 borough based social workers, 90 psychologists, and 30 family-facing support workers to serve the 270 most high-needs schools.

The City Council Finance Division, however, reached a slightly lower headcount in its analyses. According to its executive budget report for education, “The Executive Budget recognizes $79.6 million in Fiscal 2022, growing to $85.8 million in Fiscal 2024 to….[hire] 290 school based social workers, 36 borough based social workers, 90 psychologists, 30 family facing support positions, and restor[e] funding for 74 Single Shepherd guidance counselors.” (Elsewhere in the report, the Council mentions the restoration of 38 social workers, but the City Council press office explained that these workers were not included in the totals of new hires.).

As with the city’s community school investments, federal aid used to make new hires and restorations tapers off over four years, leaving questions about what will be used to replace it.

At the hearing on May 19, Treyger asked how many schools, even with these expansions, would remain without a full time social worker, guidance counselor, and school nurse. Deputy Chancellor LaShawn Robinson could not give an exact number, but said that every school will have access to either a full-time social worker or a mental health clinic, and that, for the first time, every school building—though not necessarily every school—will have access to a nurse.

On May 27, the Independent Budget Office (IBO) released its own analysis, writing that even with the city’s proposed hiring of additional support workers, the school system would still need an increase of 75 full-time social worker positions to ensure every school had one. The Department of Education told Chalkbeat, however, that the IBO’s analysis was incomplete, failing to take into account that some schools may not have social workers, but do have on-site mental health clinics.

The Department of Education is correct in that it’s not only social workers who provide mental health support in schools: The department also employs 1,050 school psychologists, though the city doesn’t publish data on which schools have them (the state does, here, but its records are a few years out of date.) 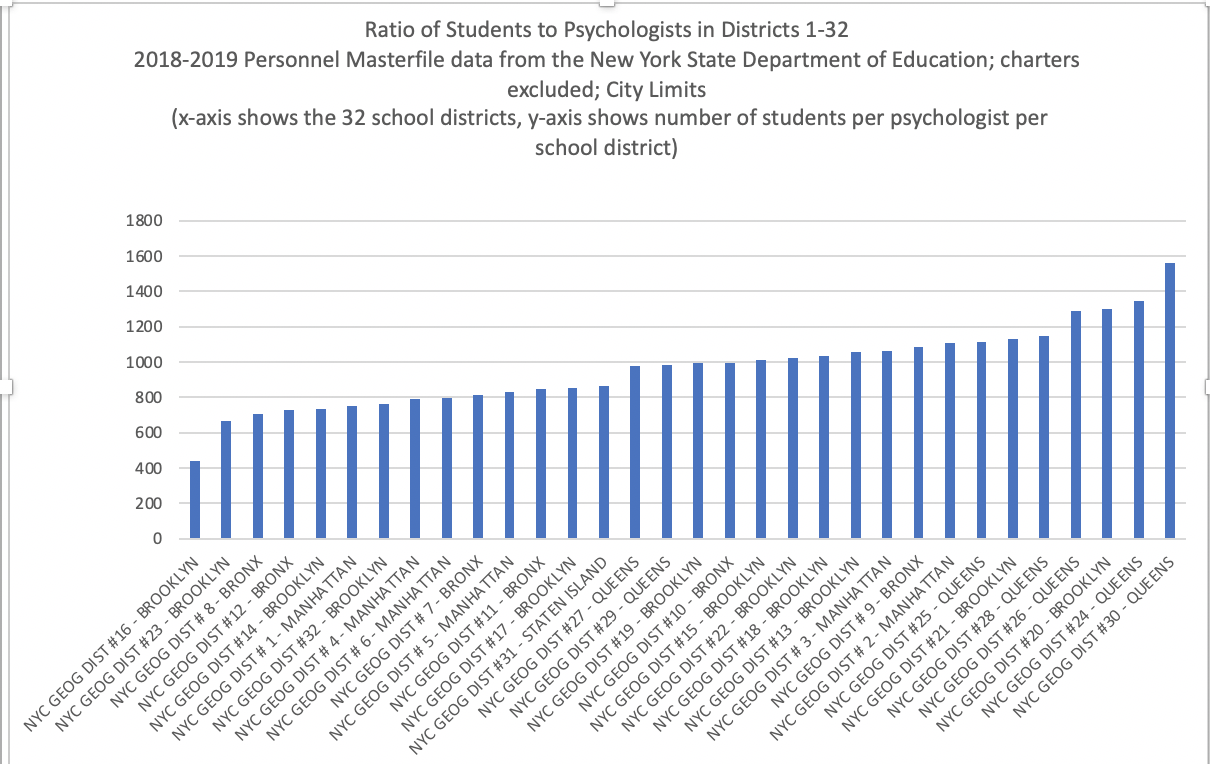 The city publishes a list of which schools have which types of partnerships here, though it doesn’t provide detail on how many support workers are available through each. Yanche says that, ideally, schools would both adopt the community school model and also have DOE-employed mental health support staff.

And numbers aren’t the only important thing. Kevin Dahill-Fuchel, the executive director of Counseling in Schools, says he hopes to see the new mental health support workers “integrated into the whole vision and mission” of schools.  He adds that it’s important to have support workers available not only to particular populations of students (such as those with Individualized Education Programs, or IEPs) but also to the broader student body—something the community school model is already doing well, he says.

Also important is whether social workers and guidance counselors can engage in preventative work that reaches children before moments of crisis, and whether those workers  are demographically representative of a school’s population, says Amy Molloy, director of the School Mental Health Resource and Training Center at the Mental Health Association in New York State.

The two roles, however, often provide different services, says Molloy. A guidance counselor might focus on ensuring students have opportunities for socio-emotional learning and college-career readiness, for example, while a social worker might counsel and support a student who is navigating a difficult family matter.

The IBO completed its own analysis and found the median student-to-social worker ratio to be 473.1, also higher than the national recommendations.

To be fair to the DOE, this data doesn’t fully reflect the landscape of mental health support workers that are currently supporting students through community-based organizations and school mental health clinics. Also, the population data included in the city’s dataset is from 2019-2020, but the city’s school population declined significantly over the past year—so the ratio of students to social workers might have improved simply due to enrollment trends.

Still, the United Federation of Teachers says the de Blasio administration’s plan for 600 new mental health professionals is insufficient. In March, the UFT released its own  five-point plan that called for the hiring of 10,000 new professionals, including academic intervention specialists, guidance counselors, social workers and psychologists.

“The UFT is advocating for intervention teams at every school for this September,” said Alison Gendar, a spokesperson for the UFT in an email to City Limits on May 13. “We need a real plan to hire and integrate teams into every school to be ready when students walk in the door. We need to make sure these resources actually get to the schools and are not absorbed by the central bureaucracy and so the impact is never felt in the classroom.”

New York State also faces a workforce shortage in the mental health field, says Molloy, so it’s  important to consider whether enough people are being trained to meet the need.

In an email on May 13, Shirley Limongi, a representative for Speaker Corey Johnson of the City Council, indicated that the speaker will continue to assess whether the mayor’s latest plan is sufficient.

“The Speaker has made clear that he will fight for students well-being following this difficult year, and that includes the appropriate numbers of guidance counselors social workers [sic],” said Limongi. ” [W]e will continue to advocate on behalf of students.”

City Limits’ series on behavioral health and NYC’s children is supported by the Citizens’ Committee for Children of New York. City Limits is solely responsible for the content and editorial direction.