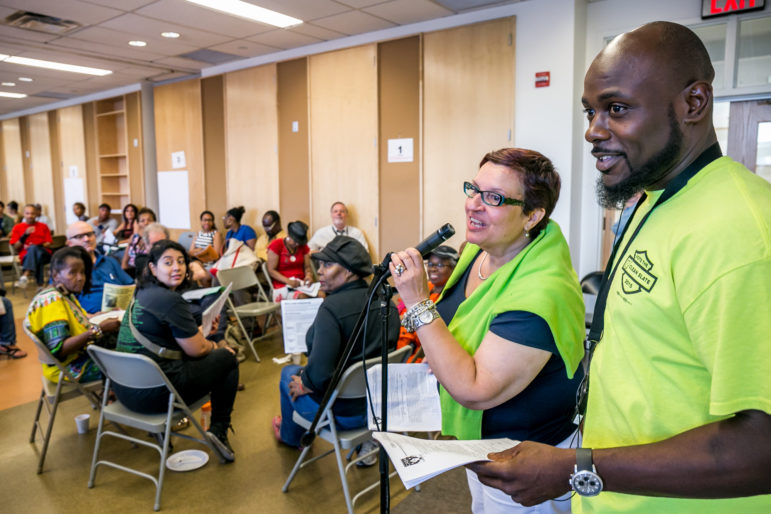 Carmen Vega-Rivera, a tenant leader with Community Action for Safe Apartments, seen during the run-up to the Jerome Avenue rezoning.

Long-time tenant champion and 40-year Bronx resident Carmen Vega-Rivera, whose career in housing advocacy began with a fight against her own landlord over a decade ago, died Sunday at the age of 65.

Born and raised on the Lower East Side, Vega-Rivera made her way uptown while pursuing a career as an artist, art curator and educator in Harlem and the Bronx. She was the founder of Atabey Collaborative, which provides development assistance for non-profit arts and education institutions. Her approximately 40 years of advocacy included work with Say Yes to Education, the East Harlem Tutorial Program, the Bronx Museum of the Arts and a wealth of other institutions, according to her family. She was a member since 2014 of the Board of Directors for Hostos Community College Foundation

Over a decade ago, after running out of options in a battle against a difficult landlord, Vega-Rivera, president of the tenant association at 888 Grand Concourse, found herself in the offices of Community Action for Safe Apartments (CASA) looking for legal resources to fight alongside her neighbors against inhabitable living conditions including rodent infestation, broken elevators and a lack of heat and hot water.

In 2017, a judge authorized a temporary receiver to start making essential repairs to the building and then it was sold for an estimated $28 million dollars, according to DNA Info. In the meantime, Vega-Rivera became a tenacious tenant organizer

“Her spirit and energy was contagious, her passion endless, her razor-sharp wit, her commitment to the Bronx deep, and she fiercely believed and demanded that another world was possible,” her allies at CASA said in a social-media post on Monday. “Carmen leaves us with the profound knowledge and belief in ourselves that through organizing, we are an unstoppable force.”

As a CASA tenant leader she played a crucial role in the struggle to protect local businesses and make affordable housing a part of the controversial Jerome Avenue rezoning plan. She also stood on the front lines of campaigning for the city’s Certificate of No Harassment program and Right to Counsel law and for the recent reform of state rent-stabilization system.

“She was a defender of people who have been marginalized and from her early days as a teacher and as an artist, her work centered around how she could bring new meaning, bring new leadership to lead people who felt they had no hope. And she brought hope to them,” said Fitzroy Christian, a CASA tenant leader and longtime ally.

As a source for City Limits, Vega-Rivera was always wary of becoming complacent and said she wanted to see her community thrive. She stressed the need to hold the accountable accountable. A deep concern was the threat of displacement. As she wrote in a 2017 City Limits op-ed:

“In our conversations with the city, we discovered that a main challenge of advancing our vision was a lack of consensus about the very nature of displacement. We were told that rezoning doesn’t cause displacement or that tenants are leaving neighborhoods by choice. We and, most importantly, the more than 4,000 CASA members who organize daily, know that displacement is real and that a rezoning which creates additional incentives for landlords to push out low-income tenants could have devastating effects.

Let’s start by defining “displacement.” It is forced movement, or movement minus power and choice. Low-income tenants of color in the Southwest Bronx face daily displacement pressures. Unscrupulous landlords employ a variety of tactics to push rent-controlled tenants out of their housing so that they can charge higher rents to higher-income tenants.

She was also active with the Bronx Coalition for a Community Vision (BxCCV) and most recently sat on the Jerome Avenue Public Health Taskforce. Earlier this year, she testified in front of the Charter Revision Commission to demand changes to the city’s land-use process.

“I am thankful for a long working relationship with Carmen that spanned over 10 years. I have fond memories of countless meetings, press conferences, rallies, town halls on important housing issues such as rent regulation, rent freezes, universal rent control, reforming Housing Court and the landmark Right to Counsel Law. Carmen was an important part of every housing issue, served as an active member of the Jerome Task Force and was never afraid to speak up and speak truth to power,” said Councilmember Vanessa Gibson. “I am blessed to have known and worked with Carmen through the years. May her work speak for itself and we always remember her love of the Bronx.”

Her many honors include the Educational Equity Concepts Groundbreaker Award, the Women’s History Month Governor’s Award for Excellence, the El Diario/La Presna – 50 Outstanding Latinas Award, and the Ellen Lurie Award.

A month before the Jerome Avenue rezoning passed the City Council, Carmen Vega-Rivera wrote warning city officials to make changes and reconsider the impact on her community, “This rezoning will forever change the Bronx,” and she was not wrong: Jerome Avenue has changed, with new development visible and the famous auto-repair shops disappearing..

This October, despite facing health challenges, Vega-Rivera joined a City Limits panel discussion on the realities of rent reform. She defended the changes in the law, insisting that housing is a human right. but added there was much work to be done in her community. “We need to do a better job informing tenants that the rent laws have changed,” she said. “Through CASA and other tenant organizing groups, we’re getting the word out.”

Carmen Vega-Rivera is survived by her husband, her daughter, her son, five grandchildren and a great grandson.