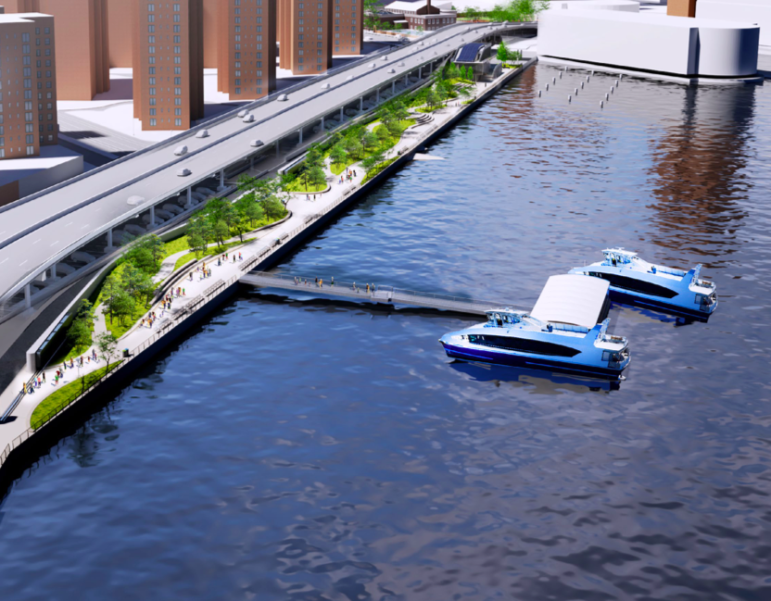 A rendering from a de Blasio administration presentation on the plan.

Climate change is not a nebulous future threat. It landed on our shores violently and mercilessly seven years ago as Superstorm Sandy. Its impact hit home to many then and continues to be seen and felt all around us.

New York City and New York State have made great strides this year passing bills designed to address the root cause of climate change–greenhouse gas emissions–but in a city with 520 miles of coastline, there is much more to be done to protect people and communities from current and future impacts.

Several years ago, in the aftermath of Sandy, the Stuyvesant Town, Lower East Side, and East Village communities came together to advocate for protective measures to fortify their waterfront and their residents from the threats of flooding from sea-level rise and storm surge. They formed partnerships with designers and architects and submitted a winning proposal to the Rebuild by Design competition. Then last year, usurping five years of community-driven planning, the city advanced a significantly different plan for the stretch of the East River waterfront between 25th Street and Montgomery Street. This blindsided many in the community and heightened tensions around this critical project that in some ways still remain today.

Councilmember Rivera and Borough President Brewer stepped up in the aftermath of this turnabout to ensure their constituents were heard, including using their own budgets to hire a third-party review of the new plan. NYLCV commends both for the leadership they showed on behalf of the community throughout this process.

Since then, the city held more than 40 meetings with community-based organizations, tenant associations, NYCHA residents, and community boards, and updated the project to reflect input they received from the community.

Despite the imperfect process, the project is now in a much stronger place. It will provide strong, environmentally-sound protection while minimizing disruption to the community during construction. Among other things, the latest plan ensures half of East River Park remains open throughout the build-out process, ongoing air quality monitoring during construction, strong dust, and noise mitigation, and nearly 1,000 new trees planted in the community.

Park and waterfront access is important to both the social and physical environment, and we believe the updated ESCR plan adequately balances this need with the urgency of protecting this vulnerable community.

With these updates, we support the ESCR project and urge Councilmembers to support it as well. As we reflect on the anniversary of Sandy, it is time to move ESCR forward.

We will continue to closely follow this process to make sure the City keeps its promises, including funding and facilitating a community advisory group.

ESCR is one of the first of many projects needed to protect waterfront communities in all five boroughs. This is still the beginning of the long-term challenge of building a resilient city capable of weathering rising seas and the next big storm. This project can set the precedent for future coastal resiliency projects citywide, so we must learn from this process and do better next time to balance policy, community needs and engagement, and the urgency of the climate crisis. It is imperative that we get both the process and the product right for future projects.

We must get community-led resiliency projects off the ground in other vulnerable waterfront communities, and it starts with the advancement of the ESCR project.

Julie Tighe is President of the New York League of Conservation Voters.