Chris Quinn to Anti-Shelter Protesters: ‘Why Do You Hate Homeless Children?’

It was cold on Wednesday when Christine Quinn—CEO of the homeless-services organization WIN—spoke to the Max & Murphy Show on WBAI. For the former Council speaker and 2013 mayoral candidate, the temperature was an important point of reference.

“Particularly on this night when it is so cold an unexpectedly wintry,” Quinn said. “Those people who have said, ‘If you open a shelter, I will burn it down,’ those people who protest against having a good roof over a six-year-old child’s head, really think about why you hate homeless children, why you hate homeless people, why you are so vicious on a night like this when there are 60,000 people in shelters?”

Quinn was referring to the ugly hearing earlier this fall in Glendale, Queens over a proposed shelter there. It was just one of several confrontations around the city between the de Blasio administration, whose 2017 “Turning the Tide” homelessness policy called for opening 90 new shelters, and communities—some without a single shelter bed at present—resisting those facilities.

While some protesters have resorted to racist and violent language, others have not. Many of the latter raise objections to the siting process. Quinn largely dismissed those, citing the urgency of the homeless situation. “I applaud the Turning the Tide initiative,” she said. “They need to get better, more streamlined, more efficient at implementing it.” 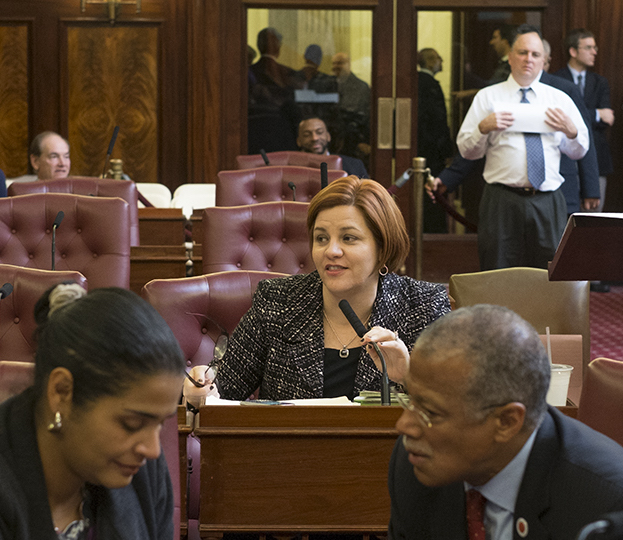 William Alatriste for the NYC Council

Recent reporting on homelessness has highlighted the growing prevalence of domestic violence as the primary problem cited by families with children newly entering the shelter system. For Quinn, that trend is less important than the fact that, whether cited as the primary driver for a family’s housing crisis or not, domestic violence is a fact of life for many households, homeless or housed.

“There is not more domestic violence than there was before but because of great efforts of society and the police department and government and advocacy organizations we are seeing survivors come forward more,” Quinn said. “I think the numbers we see not just in shelters but in society are the tip of the iceberg. I think it’s good that more people are coming forward to tell their story.”

The problem, she says, is that the shelter system doesn’t recognize the scope of the problem. At WIN shelters, which comprise 10 percent of the city’s shelter beds for families with children, 80 percent of mothers report some domestic violence in their adult lifetime. And that’s at shelters that are not designated for domestic violence survivors—indicating how pervasive violence is, and a flaw in how services are funded.

“Why wouldn’t you have those shelters prepared and ready to take on domestic violence? The trauma of it—the at times immobilizing trauma of it. To deal with it with the children, so the children don’t grow up and become batterers or survivors themselves,” Quinn said. “No one’s looking, in my opinion, in this kind of a continuum of how we could address this because all the administration cares about is getting to the day when there’s a press release that says ‘We’re not at the all-time high number.”

Quinn’s mix of praise and criticism of Mayor de Blasio’s administration comes after she’s spent four years at WIN, the role she took on in the wake of de Blasio defeating her in the 2013 Democratic primary. With the 2021 campaign beginning to take shape, no high-profile woman candidate in the race and Quinn only 53 years old, there’s been natural speculation that she might be in the mix. On Wednesday, she evaded a question about the likelihood of her running—which, it’s reasonable to say, means the likelihood is not zero.

You can hear Quinn’s chat with Ben Max and your correspondent above, or this week’s full show below.

If you have a question for our guest next week—city comptroller and likely 2021 mayoral candidate Scott Stringer—send it here.

2 thoughts on “Chris Quinn to Anti-Shelter Protesters: ‘Why Do You Hate Homeless Children?’”