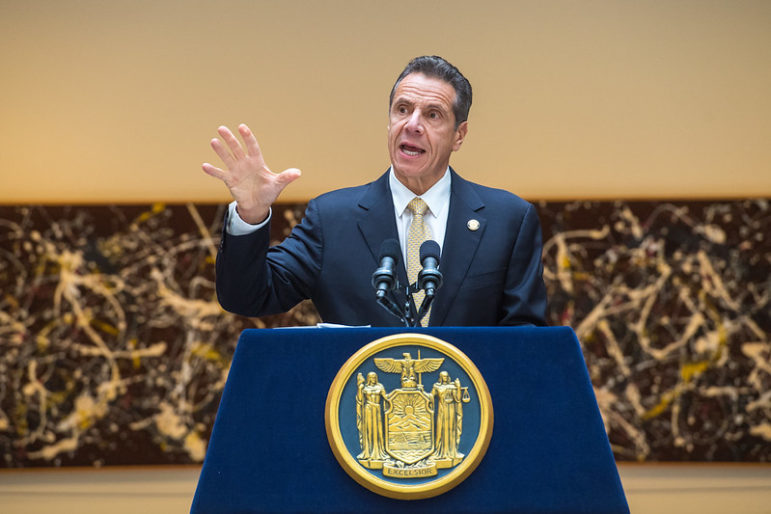 Governor Andrew Cuomo. If he doesn’t sign the ‘mechanics’ lien’ bill, it will lapse at the end of the calendar year and need to be re-passed in 2020.

Vincent Cao, who has worked as a waiter at various Chinese restaurants throughout New York City since 2001, has become expert in the ways that local businesses evade minimum wage laws.

Restaurants, says Cao, typically “pay $300 a month in wages, so all my income depends on tips. I work very long hours — normally 70 hours per week, so that’s less [than] $1 per hour.”

Such low wages are flagrantly illegal — the minimum wage for tipped workers in New York state is currently $9 an hour, set to rise to $10 an hour on December 31, plus time and a half for overtime — and Cao and his fellow workers eventually won court judgments against two restaurants, Wu Liang Ye on Lexington Avenue and Joy Luck Palace on Mott Street, for wage theft. But they were never able to collect.

In the case of Wu Liang Ye, which Cao says owed him $140,000, “we got the judgment, but [were] not able to enforce [it], because the owner changed the restaurant name, they shut down, and reopened in two to three weeks,” transferring ownership to another individual who was not on the hook for the wage theft claim. Joy Luck Palace closed to the public in January 2018 and then reopened “under new management” a month later, eventually closing for good that August.

This is an extraordinarily common problem with wage theft enforcement, say workers and their advocates. While the state Department of Labor doesn’t keep statistics, a 2015 Center for Popular Democracy report estimated that 2.1 million New Yorkers are cheated out of $3.2 billion in wages and benefits each year; that same year, a study by the Legal Aid Society, Urban Justice Center, and the National Center for Law and Economic Justice identified at least $125 million in judgments and court orders that had gone unpaid. And while a bill to crack down on wage theft scofflaws was passed by the state legislature in June, Gov. Andrew Cuomo has yet to sign it, or commit to doing so.

“A major problem is that as soon as employers know that someone’s coming after them, the money disappears,” says Richard Blum of the Legal Aid Society. “Suddenly this thriving business becomes impoverished, and we have to go through hell and back to try to find the money.”

In one case, says Sarah Ahn of the Flushing Workers Center, which has helped many restaurant workers pursue wage theft claims, “at the compliance hearing, in front of the Department of Labor, the boss said if you don’t accept a tiny percentage of your claim, then I’m shutting down, and you’re never going to get a penny.” When the workers refused, she says, “that night, they got a call not to show up to work the next day, and they shut down.” Cao says that the West Village restaurant Sushi on Hudson, faced with a labor lawsuit by a delivery worker, once “finished lunchtime, closed the restaurant for one hour, and reopened with a different name for dinner”; eleven years later, it’s still in operation under the new name, Sushi West.

As a result, cases of workers actually getting repaid for lost wages are relatively rare — something that could be reducing the number of claims filed as well. “This really discourages workers to speak out in the first place,” says Ahn. “Why would I risk my job just to win a piece of paper at the end of the day?”

In the wake of such reported abuses, the state legislature in June passed a law to have New York join about 10 other states that allow workers to place a lien on owners’ personal property — called a “mechanics’ lien” because it was first introduced in the early 20th century to protect construction workers from being stiffed by the owners of the buildings they were erecting — to prevent them from absconding with cash and starting fresh without making court-mandated payments to workers. But the bill, along with a stack of other legislation passed late in the legislative session, is currently waiting for Gov. Andrew Cuomo to call it to his desk — if not, it will lapse at the end of the calendar year and need to be re-passed in 2020.

Gov. Cuomo’s office did not reply to City Limits’ queries on his position on the lien bill. Staffer at Sen. Ramos’s and Assemblymember Rosenthal’s offices indicated that they hadn’t heard anything about any potential action on the legislation.

The primary complaints about the lien bill have come, unsurprisingly, from the restaurant industry, in particular the NYC Hospitality Alliance, an umbrella group whose website touts its advocacy “to reduce regulatory burdens.” The alliance warned members that the lien bill could allow “any disgruntled employee” to obtain a lien “based on the employee’s mere allegations of wage violation” and place restaurant managers, not just owners, at risk, because they are considered “employers” under state law. (The alliance declined to comment on the bill to City Limits, pointing instead to its website’s description of the law.)

The legislation passed in June would indeed allow workers to seek liens before a claim has been resolved, says Blum — but, he adds, “that’s the point of the bill.” Getting a lien, he notes, “does not result in the employee obtaining any money up front; they will still have to get a judgment or an order to be entitled to the money.”

Jiang Jian-Ming, a Queens resident who has spent two years fighting for back wages with a restaurant in Connecticut where he was employed in 2017 as a kitchen staffer, says he was often being forced to work 30-hour shifts with no breaks — and was fired when he complained. He says that state’s law at least allowed him to seek a lien against his former employer’s assets, though a judge has yet to rule on the request.

“All the bosses, they all want to avoid responsibility,” says Jiang through a translator. “We feel like when we are negotiating a settlement agreement, a law that you can put a lien on the bosses’ assets, it’s a key to make this happen.”

In light of the restaurant industry pressure, the Flatbush Workers Center and other bill supporters have scheduled a rally outside Cuomo’s New York City office on November 20 to urge him to sign the bill.

“For sure it’s a controversial bill, because the hospitality alliance and others are trying to create opposition by spreading misinformation,” says Assemblymember Rosenthal. But, she continues, “I’m confident the governor understands what wage theft is about. When he was AG he worked on the issue. He certainly has staff in there that know about wage theft. I’m hoping we get justice for the workers who have worked long and hard and earned money, but have yet to see it.”

Even if the governor does sign the bill, a lien law wouldn’t be a silver bullet: Workers and their advocates note that even with access to liens, wage theft cases can take years to resolve. And while employees could seek liens on past claims and judgments, it would remain too late for those whose former places of business have already changed hands.

Still, the law could at least provide some hope of eventually getting paid, which is hard for many workers to see now.

“We’re not saying this bill is going to eliminate the problem, but it gives workers a fighting chance,” says Ahn. And the hope is that that will help change employer behavior, both in their payroll practices and in court.

“If you say to businesses, look, you will get caught, and you’re actually going to have to pay 100 percent plus liquated damages,” says Blum, “then suddenly that business model of stealing from workers doesn’t look as attractive.”