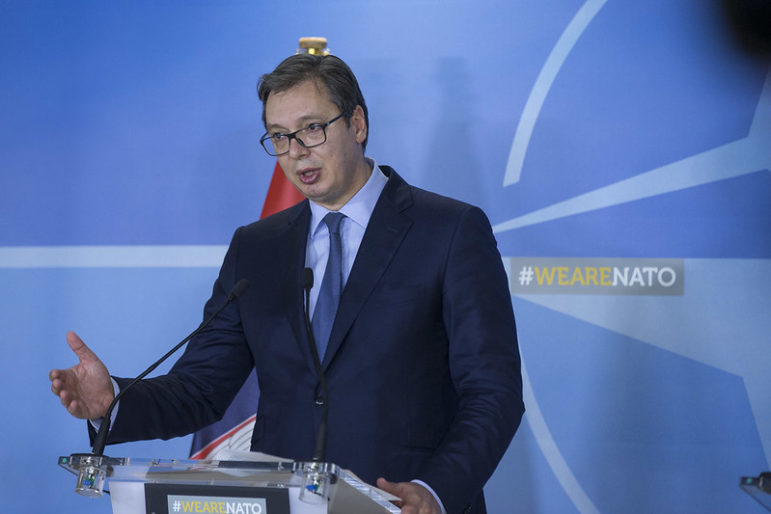 President of the Republic of Serbia Aleksandar Vučić

While media freedom continues to decline in Serbia, many members of the Serbian diaspora in New York and other American cities are not speaking out against it, mainly because of detachment from their native country, exacerbated by a lack of Serbian news outlets here to keep them informed on what’s happening back home, experts and analysts say.

“Unlike Serbs in some other diasporas, most notably in the Czech Republic or in England, Serbs in New York didn’t organize a public protest or movement against the current government,” Marija Šajkaš, a writer and political analyst from Belgrade who now lives in New York, says in an email. “Some of the reasons might be a relative distance to the home country as well as an absence of Serbian language media in New York.”

Instead, international media organizations are at the forefront of educating the diaspora about the repeated attacks by the government against Serbian journalists. Reporters in Serbia often face attacks and smears from politicians as well as pro-government tabloids. According to a 2018 European Commission report, attacks on members of the media have been increasing since 2012, when Aleksandar Vučić—who has been president of Serbia since 2017—first served as Minister of Defense and later as First Deputy Prime Minister.

“The Voice of America Serbian Service is trying to raise awareness and we are trying whenever we can to ask other organizations like Freedom House and the Committee to Protect Journalists to comment on the situation in our homeland,” says Ivana Konstantinovic, a broadcaster at the Voice of America Serbian Service division, a TV channel broadcasting to 10 million Serbs throughout the Balkans.

Unfortunately, these attacks are nothing new. Last year, the Organization for Security and Co-operation in Europe (OSCE) released a statement condemning an arson attack on the home of Milan Jovanović, who works for the news portal Žig Info. Overall, the Independent Journalists’ Association of Serbia (NUNS) determined that there were 102 incidents of coercion or violence against journalists in 2018.

This year, Serbia dropped 14 places in the annual Reporters Without Borders Press Freedom Index. Numerous other attacks on journalists frequently go uninvestigated, according to the same organization. In Serbia’s capital city of Belgrade, weekly protests occur against what the people describe as an aggressive censorship campaign by Vučić.

The protests, known as “one in five million,” are a direct response to Vučić’s statement that even if there were five million people in the streets, he would not listen to their requests. Vučić served as the Minister of Information under the former President Slobodan Milošević, who was notorious for leading an autocratic and authoritarian regime.

“I know people in the Serbian diaspora who would go so far as to say there was more media freedom under the Milošević regime than under Vučić,” says Alexander Mirescu, a senior consultant at The World Bank and an expert on Balkan politics. “What you see now in media freedom in Serbia didn’t happen overnight. This has been a slow boil into what we have today.”

The ongoing political turmoil has left some Serbian New Yorkers feeling hopeless about the situation in their native country.

“I mean, peaceful revolution there will not bring anything. War won’t bring anything too, but I don’t think anything will change,” says Violeta Womble, a resident of Brooklyn originally from the city of Novi Sad. “I think the people don’t have any power to build their future there. Somebody else is doing that and that will not change.”

In addition to severely restricted media freedom, Serbia also has poor ratings on political rights and civil liberties, according to Freedom House, a watchdog organization that advocates for human rights and democracy. Last November, opposition politician Borko Stefanović was severely beaten by a group of men before he was scheduled to debate in the city of Kruševac.

In New York City, there is a lack of access to Serbian news, which could play a factor in why members of the diaspora here aren’t as connected to what’s happening back home, experts say.

“Until some years ago, there used to be a local newspaper called Vesti that was available for purchase on newsstands throughout the city and in addition to carrying news from Serbia, Vesti had a North American section as well as articles focused on life in the diaspora in big centers such as New York and Chicago,” says Šajkaš. “That was the incentive for buying the newspapers as well as to get all the information relevant to life back home.” Vesti closed its newspaper in New York City due to financial reasons, Šajkaš says.

As of 2017, there were approximately 3,326 Serbians living in New York City, according to the U.S. Census Bureau estimates. How connected Serbian-Americans might be to what’s happening in their native country also depends on their age and the era in which they left Serbia, other experts say.

“There’s different kinds of diaspora. You have to take into consideration when they left Serbia, such as if it was during the war in the 90’s or before then,” says Tanya Domi, an adjunct assistant professor of international and public affairs at Columbia University. “They just probably aren’t connected and as a result, they really don’t know what’s going on.”

Even if they aren’t taking action against it in their adopted homelands, concern about the country’s current government is at the forefront of people’s minds in the diaspora, a paper published in February in the Journal of Balkan & Near Eastern Studies found. A series of surveys conducted before and after the 2017 Serbian presidential election analyzed a variety of factors, including what members of the diaspora thought of their family’s political viewpoints and whether they thought the diaspora should become involved in political movements in Serbia. More than 71 percent of the responders marked their viewpoint of the current government as “very negative.”

Most of the Serbian diaspora supported the runner-up in the 2017 election, Saša Janković, according to a survey from EUROPP, a website run by the London School of Economics and Political Science. The survey also states that most of the diaspora receive their news online, with Serbian-oriented TV and print media being noticeably absent in other countries.

“Our compatriots abroad learn about current events and express their opinions mostly on social networks, which allow each person to receive media and sources of information from different aspects,” wrote Ivan Kalauzovic, a chronicler of the Serbian diaspora who lives in the southeastern Serbian city of Niš, in an email. “The fact that Serbia does not have a higher state authority which could cooperate with its citizens abroad sufficiently speaks in favor of the lack of communication.”

Šajkaš also believes that a lack of understanding about the opposing political factions contributes to the disconnect between the Serbian diaspora and those who are still in their home country.

“I also think that Serbs living in New York are less political than their compatriots in Europe or even members of close diasporas such as Bosnians and Croats,” Šajkaš says. “No people in the [U.S.] diaspora are speaking out about what’s happening in Serbia, mainly because it’s unclear to them who’s leading the protests.”

The situation continues to remain volatile. Recently, approximately 100 anti-government protesters forced their way into the headquarters of the state-run broadcast station RTS, where they expressed opposition to what they said was the station’s pro-government stance.

Serbian journalists, both at home and abroad, continue working to shed light on the increasingly precarious media situation.

“I was working with B92, the first independent media during the Milošević regime. We were fighting the power all the time, we were fighting for freedom, freedom of speech and also for truth,” says Konstantinovic. “I must say that for myself, this is just something I’ve been doing all my life and right now, this is a chance to continue.”

Members of the diaspora in New York, like Womble, say that while they’re discontented with the current president, they also feel a sense of helplessness to do anything about it.

“I don’t care. I have my own life, even though I am sad for the people who are there,” said Womble. “I think that they feel hopeless.”