By Zhiming Zhang and Sha Meng for Sing Tao Daily. 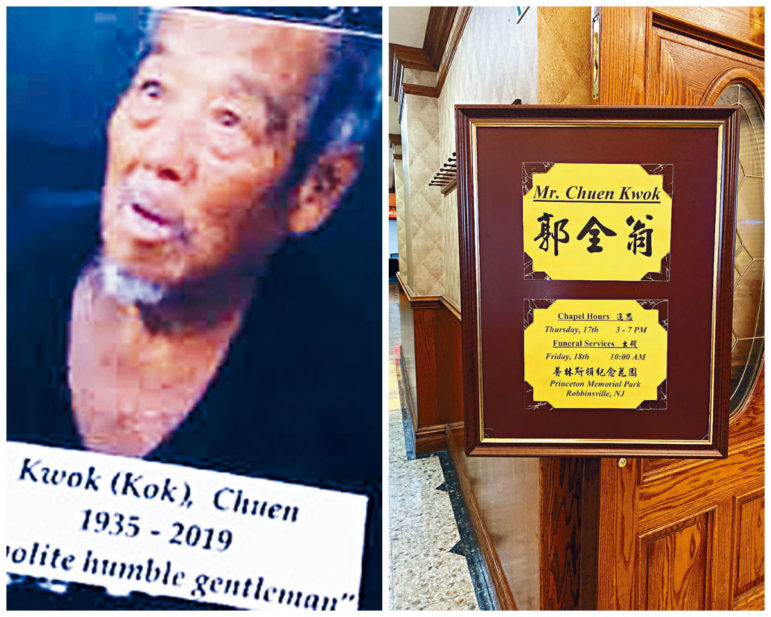 A memorial service was held on Oct. 17 for Chuen Kwok, who was killed earlier this month during a violent attack in Chinatown.

Read the original stories in Chinese at Sing Tao Daily: here and here

Translated and condensed by Rong Xiaoqing

Chuen Kwok, one of the homeless men killed in the deadly random attacks in Chinatown two weeks ago, was buried in the Princeton Cemetery in New Jersey on Oct. 18, thanks to donations from the Chinese community.

At his memorial services held the day before, many community members came to say farewell, despite the chilly weather. Attendees, including a representative from Congresswoman Nydia Velasquez’s office and State Assemblywoman Yuh-Line Niou, called for the government to pay more attention to and find solutions for issues around affordable housing, homelessness and mental health.

The memorial was held at the Ng Fook Funeral Services in Chinatown. With no known family members, Kwok’s oufit, coffin and burial lot were purchased with donations from community members. Amy Chan, a founder of the Celestial Love Foundation, a charity that helps cover end-of-life costs for Chinese immigrants, said the foundation and Ng Fook, of which she is the president, paid for Kwok’s funeral: The foundation donated the coffin and burial fees, while Ng Fook provided the memorial and funeral services for free. The burial lot was purchased with Chan’s personal donation, she said, tallying the entire funeral and related services at more than $10,000.

Founded in 1997, the Celestial Love Foundation pools resources from the Chinese community to provide high-quality funeral services to Chinese immigrants. A major part of its work is to help those like Kwok who died alone and had no one else to pay for their services.

“We want to do what we can do to give them a decent funeral,” Chan said.

Mr. Zhao, a resident who lives on Chinatown’s Pell Street, attended the service. He passes by the street corner where Kwok settled everyday, and although the two never had long conversations, they would greet each other each time they met, and Zhao sometimes brought food for Kwok. When Zhao passed by the same street corner on the day Kwok was killed, he noticed it was enclosed by the yellow police tape, but he didn’t realize realize what had happened  until he heard about the brutality from friends in the afternoon, and learned more details in the newspapers the next day.

Zhao, who has been in the U.S. for more than 70 years, said Kwok was an old immigrant like himself. Zhao said Kwok once lived in a shelter, but he didn’t like it, so he eventually landed on the streets of Chinatown, where he lived a peaceful life in “his own community.”

“I feel really sad his life ended this way,” Zhao said, adding that he thinks the government should do more to address problems with housing and welfare.

Shirley Ng, Kwok’s friend who greeted the attendees at his memorial service, said the city should improve security and shelter conditions so more homeless people would stay there, rather than risk sleeping on the street.