Debate Over How to Root Out Age Discrimination in NYC Workplaces 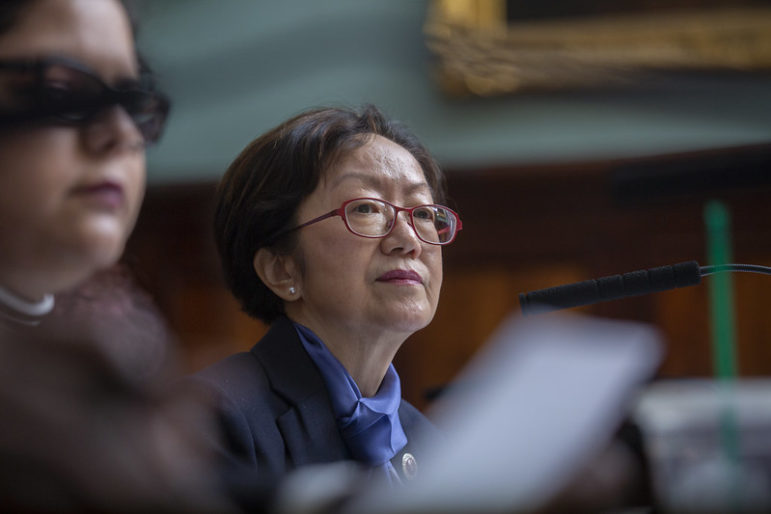 Councilmember Margaret Chin at this week's hearing: 'For older women, the sexism we face throughout our lives and careers intersects with ageism. It's time for a culture shift.'

NY1 reporters who launched a lawsuit against their parent company opened up a Tuesday City Council hearing on age discrimination in the workplace with their testimony. Vivian Lee, 44, and Amanda Farinacci, 40, sued their network’s parent company, Charter Communications, in June alleging gender and age discrimination. They were joined by Marisol Seda, 52, who launched a similar lawsuit against Charter last November.

“I came here to cover your work, but I never imagined having to be on this side,” Seda began. The three anchors described being undermined and replaced with younger anchors, even as men in their workplace were promoted with age.

“Men are allowed to age with dignity and grace,” Lee testified. “Grey hair gives them gravitas, while it makes us more disposable.”

The anchors spoke in support of a legislative package put forward by Councilmembers Margaret Chin and Diana Ayala aimed at addressing age discrimination.

The legislation attempts to address an employment problem that’s widely acknowledged to exist but historically difficult to prove.

According to its report in fiscal year 2019, the agency received 160 complaints—called “inquiries”— about age discrimination during that period, of which 106 concerned employment.

Over, the same period, the agency filed a complaint—a formal notice that kicks off its investigation—785 times overall, and 42 times in case of alleged age-based employment discrimination. The agency’s investigations could end any number of ways, including an arbitration process hosted by CCHR or a legal decision at the Office of Administrative Trials and Hearings. Cases are considered “settled” by CCHR at the end of this process.

During the year, CCHR settled 68 claims where age-based discrimination was cited, according to testimony by Raj. Those claims could all also include discrimination across other categories, such as gender.

One of the bills introduced would require CCHR to perform more “testing,” or determining bias through test cases. The bill asks for at least five such investigations a year for three years. Specifically, the law would require “matched pairs of testers who shall apply for the same job and who shall present similar credentials but who shall not present the same actual or perceived age. Of the two testers, at least one shall present to be above the age of 50.”

Raj testified that while testing is used by the agency it isn’t a fruitful strategy to root out age discrimination. CCHR undertook 900 tests last year for discrimination, but none were for age because, Raj argued, age discrimination is more difficult to prove through this method than it would be for other protected classes.

“Discrimination is very subtle,” Raj said, “and with age discrimination what happens is that there may be other factors and other protected categories that may influence why a person is hired or not.”

Raj argued that simply requesting data from companies—asking for ages of applicants who applied for jobs and for those who received them—would be a better way to detect age discrimination.

The hearing was preceded by a rally in front of City Hall’s steps attended by Chin, the NY1 anchors who testified and two dozen AARP advocates, most of whom were women of color. Several spoke about the intersection of age and gender discrimination.

“For older women, the sexism we face throughout our lives and careers intersects with ageism. It’s time for a culture shift,” Chin said before discussing her legislation with the crowd. Chin later said during the hearing she wanted the legislation to be passed quickly.

The rally and hearing came at the end of Active Aging Week, a campaign by the International Council on Active Aging to promote healthy lifestyles for seniors. To coincide, Brooklyn Borough President Eric Adams released the results of a survey of over 2000 older Brooklynites. The report recommends more public seating, more computer classes for seniors, and to “integrate training for seniors  into already-existing workforce development programs across the borough.”