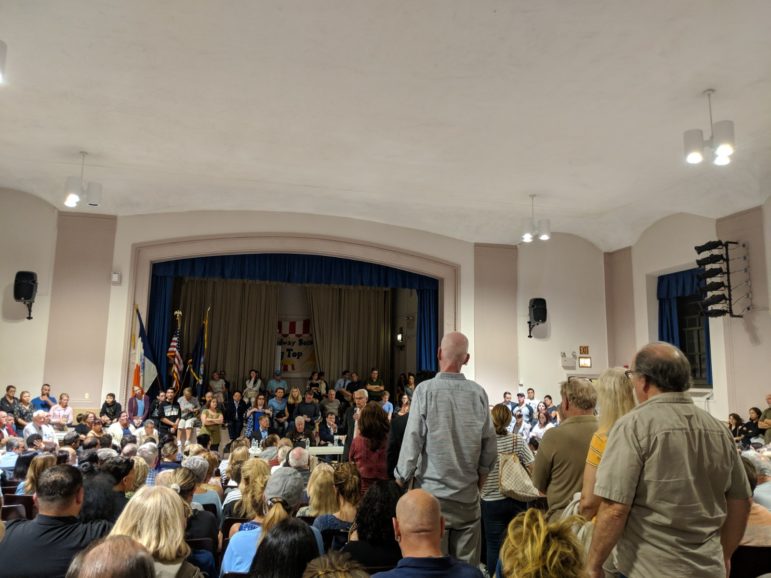 Last year, on November 16, Arkadiusz Jasinski was found frozen to death on a Forest Ave sidewalk in Ridgewood, Queens after a snowstorm. Jasinski, who went by “Arek,” was a homeless man who frequently received the services of the Hungry Monk Rescue Truck, a homeless outreach mission operated out of Covenant Lutheran Church. In a statement about Arek’s death, Councilmember Robert Holden said, “This is a tragic reminder that there are less fortunate who desperately need our help.”

Ironically, Holden has been leading the charge to block the city from opening a shelter in Glendale, Queens. As part of his crusade to block the shelter, which is prominently displayed on a campaign website from Holden’s successful run for City Council in 2017, he helped form a coalition of residents in Glendale and Middle Village eager to do everything in their power from letting City Hall open a shelter in their backyard.

The proposed DHS shelter is set to be located at 78-16 Cooper Ave and will provide beds to 200 adult men who’ll receive social services by shelter provider Westhab. Shelter opponents have gone from raising thousands of dollars for an attorney to mobilizing hundreds of residents to speak out against the shelter at protests and hearings. Several talking points have emerged since their battle against the City began. The first is that they don’t believe in warehousing the homeless. The second is that they have invested in their neighborhood and want to keep it safe and stable. All of their rallying cries and conversations about the shelter are always laced with racial implications of “outsiders” who Holden said at a recent town hall, will not assimilate into their community.

A Different View:
Queens Councilmember on the Glendale Shelter Debate


Holden has stated this former factory doesn’t make a good location for a shelter. Locals have said that the site offers inadequate transportation services, while Holden says shelter residents will not get the services they need and has long-criticized Mayor de Blasio’s plan to reduce the shelter population. Holden has also called out the not-for-profit shelter industry, who he has billed as “poverty pimps” for profiting off of the shelter business.

Housing advocates agree that the mayor has majorly failed its homeless and that his housing plan doesn’t tackle the problem at the root. We all agree that warehousing the homeless is not the solution. So why then does Holden always resort to scare tactics when talking about this shelter?

Community Board 5 holds a public hearing on the proposed homeless shelter on Monday, October 7 at 7:30 p.m. at Christ the King High School, 68-02 Metropolitan Ave, Middle Village.

It’s easy to create a moral panic where there is none. Though Holden has advocated for potential solutions to end homelessness, he mentions them in passing while highlighting things that would presumably scare a conservative homeowner from Queens with a family. Mentions of homeless men coming from prison and from Rikers Island is the biggest fear. People talk about all the sex offenders that will be situated near their children.

When his constituents make comments such as “best place for the shelters are the ghettos like Harlem,” Holden remains silent while his staffers say he can’t control the actions of others. But he can control where people direct their energies and he should certainly speak up when racist comments are made and denounce them. And if he can mobilize thousands in the span of four years to block a shelter from opening, imagine what would be possible if he helped lead, not with fear, but with compassion by joining with housing advocates in getting the city and the state to take up measures to end homelessness?

The affordable housing crisis in New York State is only getting worse. It’s exacerbated by the mayor’s faulty housing plan and his tax giveaways to rich developers. We never seem to blame these bad actors, however, because it’s easier to blame the homeless for our societal failure. People would rather focus on what makes more sense to them—protecting their private property—rather than connecting the fact that shelters are filled with a disproportionate amount of black and brown people to state-sponsored segregation instituted by the government going back to the 1930s when federal housing policy was being set.

To Holden, the solution is small church-based shelters because he says that communities need to “take care of their own.” With 400 homeless adults coming from the 11385 zip code, it seems like we have a lot of people to take care of and these small shelters will not solve the problem.

At an October 2 City Council joint hearing of the Committees on Criminal Justice and General Welfare, Holden recited this piece of data, “In 2017, more than 54 percent of individuals released from prison to NYC were released directly into the city’s shelter system.” This comes from a report released last year by the Coalition for the Homeless, which highlights ineffectual city and state policy decisions that have led to the rise in homelessness and offers steps that must be taken to put an end to the affordable housing crisis that drives the problem. Our shelters are filled to the brim, with many individuals choosing to sleep in the streets and subway cars so as to not risk their safety in potentially dangerous shelters.

Yes, our homeless population keeps growing and yes, our shelter population includes formerly incarcerated individuals. Our shelter population also includes over 20,000 homeless children and the families who enter the shelter system come from some of the poorest neighborhoods in our city. This is how institutional racism manifests. Homeless people might also suffer from substance abuse issues and mental health disabilities. This doesn’t mean they don’t deserve dignified housing. People are complicated beings but the solutions to end homelessness don’t have to be complicated. It’s as simple as creating permanent and truly affordable housing.

We can build housing by instituting progressive tax solutions to raise taxes on the rich and demanding Governor Cuomo set aside 15% or more units within new affordable housing projects to homeless New Yorkers. We can also create stronger protections for all tenants by passing legislation at the city and state levels to keep those that are currently housed out of the shelter system. One prime example is passing good cause legislation, which would give tenants not covered by rent regulations protection from meritless evictions. Finally, if we don’t want people currently incarcerated in Rikers Island to be released into the shelters, there’s an obvious solution for that—close the jails. The city can direct the millions it takes to keep our jails open into creating housing for all and programs to keep our communities safe. Stable housing is one important part of helping to reduce incarceration.

Housing advocates are proposing a slew of solutions. The world that we want to create isn’t out of some utopian novel but rather comes from the need to create a just society for the sake of our future. We’ve created a strong statewide housing movement in New York and our allies are also fighting for housing nationally by demanding a Homes Guarantee, a policy platform that makes housing a right in our country. This isn’t anything radical but rather it’s common sense. To turn this vision into a reality in which nobody gets left behind and where we all look out for one another, and not just “our own,” we need all hands on deck and we need Councilmember Holden and the rest of our elected officials on board along with their supporters. In a just society, nobody freezes to death simply because they don’t have a home.

Raquel Namuche is an organizer with the Ridgewood Tenants Union, which is a part of the Upstate-Downstate Housing Alliance, a diverse coalition of tenants, homeless people, manufactured housing residents, and advocates from across New York fighting for stronger tenant protections and an end to homelessness.