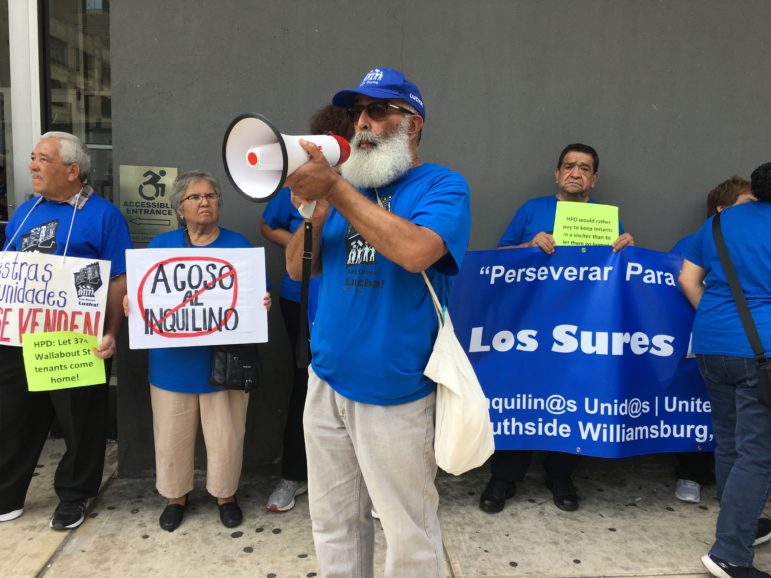 Tenants of 374 Wallabout Street in Brooklyn and their allies rally outside of Housing Court.

Tenants of a rent-stabilized building testified in Brooklyn housing court Tuesday after filing a lawsuit against their landlord and the city’s housing department over what they allege were a lack of repairs and enforcement that has prevented them from returning home since an August 2018 fire.

On August 23, 2018 a fire started on the rooftop of a neighboring building and spread to 374 Wallabout Street, a six-unit walk-up residential building. Court records say FDNY was unable to determine a cause. Three apartments were damaged and those tenants moved out. One of the families is now living in a shelter according to the tenants’ attorney Adam Meyer, director of litigation at nonprofit Communities Resist. Meyer says some of the tenants had lived at the address for 35 years.

Plaintiffs Isabel and Raul Lopez and Carmen Galindo filed the suit against landlord Joel Fried and the Department of Housing Preservation and Development’s 7A program. The state-mandated 7A program, which has existed since 1965, empowers Housing Court to appoint administrators to operate long-neglected buildings.

The appointment of an administrator can happen against the will of the property owner, at the request of tenants or HPD. The administrator, which can be a non-profit or a for-profit property-management company, operates under court order as a temporary landlord and has the authority to collect rent and make needed repairs. In some cases, HPD can offer some financial assistance to fund the repair work.

Meyer says HPD does not want to support a 7A designation for the site because the city does not want to loan the funds from the 7A program to a landlord. But HPD says they have not had access to the building for an inspection.

HPD says it instead filed a comprehensive case against the landlord in June, a few months after the tenants filed their case in February. According to HPD, a comprehensive case is filed when there are outstanding violations, failures to obey vacate orders or other serious issues at a building. In those cases, HPD will typically seek civil penalties, but in some cases if the property owner is especially uncooperative, HPD may seek contempt sanctions which could include incarceration. *

“While tenants may seek a 7A administrator, we must evaluate whether it will be the most effective and efficient recourse for tenants,” HPD told City Limits. “In order to make this determination, we need to be able to fully inspect conditions at the building, which we have not been able to do at this property due to lack of access. In the meantime, we’ve filed a comprehensive case in housing court and will continue to do everything within our power to hold this landlord accountable.”

A comprehensive case and an application for 7A administration are similar in that they are aimed at addressing major repair issues. The difference is that in a comprehensive case, a judge orders the landlord to do them. Under 7A, a separate entity takes charge of the building and does the work.

At Tuesday’s court session, the city’s attorney said the tenants had to leave immediately after the August 2018 blaze under a fire vacate order. The housing agency scheduled an inspection for next week but had not been able to make an inspection earlier because the building has been “padlocked and sealed.”

When the landlord’s attorney asked for details on what repairs were needed before the fire, the judge said the conditions of the apartment before the fire were not relevant to the case. In return, the landlord’s attorney asked for a dismissal on the grounds that the court could not establish the conditions of the apartments before and after the fire. The judge denied the motion.

Also on hand were a dozen community members from the 374 Wallabout Tenants Association, Los Sures Lucha, Southside United HDFC-Los Sures, Communities Resist (CoRe) and community activists from the Brooklyn-based nonprofit Los Sures who protested against HPD and the landlord outside of the courthouse.

Tenants and activists said in press statement that since 2015 Fried has been harassing the rent-stabilized tenants in his buildings. “In the midst of this campaign of harassment, the building caught on fire in August 2018, causing the city to vacate the tenants, disrupting every aspect of their lives,” they claimed.

Seventeen-year old Gysell Gordillo, who has lived in the building since her birth, says she has been living in a Harlem shelter for the past year with her family. Raul Lopez, another tenant, said “He showed us with his actions that he doesn’t want us there.”

According to city records, there are 35 open violations on the property.

The civil court judge set another court date for October 7th this year.

HPD initiates between 5,000 and 7,000 legal actions a year, but according to information on OpenDataNYC, those cases rarely involve Article 7A.

*Clarification: This story was edited after initial publication to include mention of a separate HPD legal action,