Opinion: Council Must Not Hide Behind ‘Member Deference’ on Borough Jails 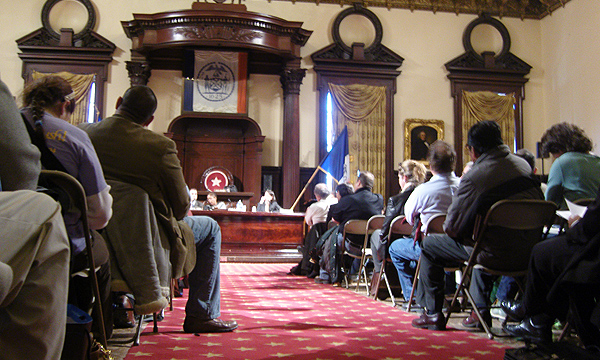 On matters of land use, the City Council has traditionally operated on 'member deference,' i.e. voting to follow the wishes of the Councilmember in whose district the land use change is proposed.

Within the next two months, Speaker Corey Johnson is expected to lead the New York City Council in voting on a land-use application with epochal implications belied by its bureaucratic language on zoning, building height and parking: a proposal to build four new borough-based jails with the capacity to cage thousands of humans on any given day.

Following the resounding but non-binding rejections of every relevant community board, and partial or complete rejections by three of the four borough presidents required to be consulted, the City Planning Commission is currently deliberating on the plan and next week will take its binding vote the day after Labor Day, just two days before the City Council’s one and only public hearing on this plan (and the hectic first day of school) on September 5th.

In either case, if the City Council obeys Johnson’s desire to approve Mayor de Blasio’s jail expansion plan—rhetorically camouflaged as “decarceration” by the urgent and indisputable need to close the racist torture chamber of Rikers Island—they would be voting for the indefinite continuation of the incarceration of tens of thousands of New Yorkers per year, and approving the entrenchment of systems of unfreedom into the physical landscape of this city for generations to come.

On matters of land use, the City Council has traditionally operated on “member deference”, i.e. voting to follow the wishes of the Councilmember in whose district the land use change is proposed. Leaving aside the many problems with this process under ordinary circumstances, this jail expansion plan is extraordinary.

To fast-track jail expansion without a thorough public debate, the city has created the first land use application in recent memory to affect four distinct sites across the boroughs of Manhattan, Brooklyn, Queens, and the Bronx, as opposed to the typical single-site application.

However, this attempt by supposed “progressives” to recommit NYC to a future of incarceration is far broader and deeper than land use. This is a momentous decision about the freedom or captivity of countless New Yorkers, including many yet to be born. It is the height of absurdity to rely on a land use process—dominated by concerns such as the shadows cast by buildings which in this case would be the tallest skyscraper jails in the world—to make such an enduringly consequential choice.

The designers of these jails envision them as “multigenerational.” If they are built, New Yorkers from far-flung corners of every borough will be caged in them for decades beyond the terms of every current elected official. These citywide ramifications mean that Councilmembers cannot hide behind the archaic precedent of “member deference” to conceal the power they hold to stop this disastrous jail expansion plan. Every Councilmember has an obligation to form their own judgment of this plan and publicly justify that decision on its own merits, irrespective of the views of Stephen Levin, Diana Ayala, Margaret Chin, and Karen Koslowitz, who shamefully follow their leader Johnson in supporting jail expansion in their respective districts and, with it, the city’s plans to continue locking up tens of thousands of overwhelmingly Black and Brown, poor and working-class New Yorkers every year. If they build it, they will fill it.

If Councilmembers take seriously their claimed responsibility to represent the interests of their constituents, it is their duty to ask questions such as:

• Given that Mayor de Blasio and all current Councilmembers are term-limited out of office before the alleged Rikers Island closure date of 2026, what legally mandates the next mayor and City Council to close Rikers Island?

• Since every single jail in New York City was introduced as a “humane” improvement to replace existing carceral facilities, only to turn brutal, why will this time be different?

• How can the plan’s apologists, who constantly exceptionalize Rikers as more barbaric than other jails such as the Tombs or the Brooklyn Detention Center (as if there is any such thing as a humane cage), justify moving the entire NYC jail population to Rikers during the years-long construction of these proposed new jails?

• What possibilities for real public safety—coming from healthcare including mental healthcare, housing including NYCHA repair, education, living wage employment, and other social programs—could be created by alternative investments of the $10 billion currently set aside for jail expansion?

Of course, to even formulate such questions is to recognize that this jail expansion plan is a looming catastrophe that must be stopped before it gets off the ground—because if Johnson, Land Use Committee Chair Rafael Salamanca, and our absentee mayor had satisfactory answers, they would have already stated them.

We must vigorously explore a no build scenario where we use the $11 billion for community needs. Nearly seven in 10 people in city jails are awaiting trial and either have a bail that can be paid or a remand that can be fought. Roughly one in eight are held on city sentences of less than a year along with 20 percent held on mostly technical parole violations.

If the overwhelming majority of people held can be released we can and must shut down Rikers with no new jails and give $11 billion to the needs of our community.

Given the foreseeable horrors this plan will result in, any Councilmember who shirks their responsibility to vocally oppose jail expansion should expect their shortsightedness and cowardice to doom their every future political aspiration as thoroughly as de Blasio’s presidential bid. The immense swell of grassroots opposition to this plan could not possibly be more clear: we demand the immediate withdrawal of this land use application; we demand that the billions of dollars allocated to this plan must be used for community needs instead of perpetuating incarceration; and we demand the closure of Rikers Island with no new jails.

Nabil Hassein is a freelance technologist and educator, and a volunteer organizer with No New Jails NYC.

4 thoughts on “Opinion: Council Must Not Hide Behind ‘Member Deference’ on Borough Jails”