By Darren Mack and DeAnna Hoskins. 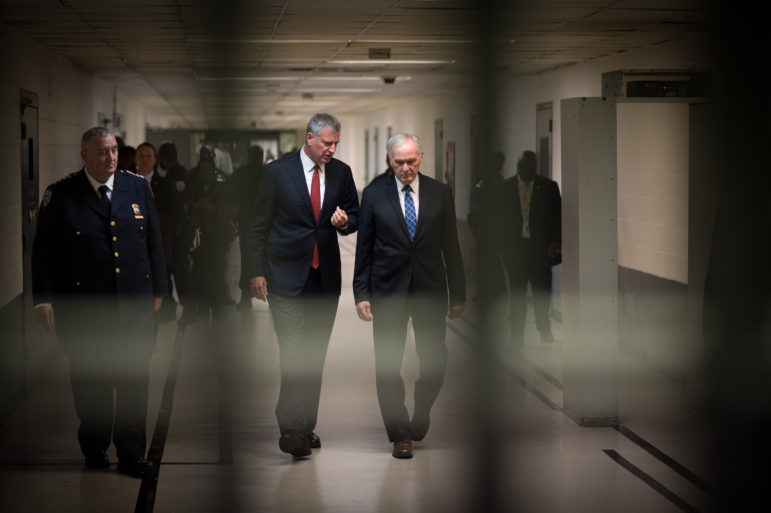 Those who have experienced Rikers — and are working to close it — feel increased urgency as the summer brings memories of sweltering heat in crumbling buildings with no central air.

Marvin Mayfield, a military veteran and #CLOSErikers leader who was incarcerated on Rikers and the Boat — a jail barge docked in the Bronx which he describes as a modern-day slave ship — recently testified to horrible conditions. “As the heat and humidity goes up, I’m reminded the cells on Rikers are so hot — that the walls sweat. There was no air. I had to lay on the floor naked, to suck a little bit of air from a slit on the floor, just to breathe. And people are still losing their lives on Rikers Island. How many more have to die before we shut it down? Justice delayed is justice denied.”

Impacted leaders say, “No more delays.” Our advocacy and demands secured a commitment from Mayor de Blasio to close “Torture Island” and we are serious about closing it as fast as possible. We’ve developed and advanced the only credible plan that addresses these key issues: drastically shrinking the jail population; improving conditions and reducing harm for anyone who remains in detention; and investing in community resources — not law enforcement — to achieve public safety. We urge the City Council to make history this fall by approving the land use proposal to shrink the system from 12 to four jails citywide.

We have already begun to dismantle this system that brutalizes people every day. Due to directly impacted leaders’ advocacy of the past three years, the de Blasio administration lowered the proposed bed count from 5,750 to 4,600 citywide (with capacity for 4,000 people).  The reduction of more than 10,000 beds— will be the most significant decarceration in the history of the United States. This will solidify New York City as the most decarcerated metropolis in the country. The mayor must commit to decarcerate further. By our analysis, it’s possible for the city to decarcerate to less than 3,000 people — and stop the flow of people entering the system.

This administration could prevent many people from being incarcerated by urging district attorneys to immediately honor the new pretrial laws that impacted leaders fought for and won. He could also prevent criminalization by stopping the NYPD from arresting people for fare evasion, drug-related charges, and sex work. And, he can eliminate one-year sentences served in city jails in favor of alternatives to incarceration, while ensuring people with serious mental health needs are supported in treatment settings without being criminalized.

Advocates ended money bail and achieved protection of pretrial liberty and due process for thousands of New Yorkers and they will continue fighting to pass legislation that ends money bail and protects all New Yorkers regardless of charge. Advocates will also continue fighting for parole reform to end the abuse inflicted by mass supervision and stop the re-arrest of people on inconsequential technical violations. We are working at the state level in partnership with a powerful grassroots movement to end the criminalization and detention of Black, Brown, poor, queer, trans, and immigrant communities and those with mental health needs.

Rikers is a human rights crisis—and we have an opportunity to end it. The Correction Officers union still advocates against a smaller system of borough-based facilities and in favor of rebuilding on the toxic landfill that is Rikers. This would allow them to continue operating a 400-acre penal colony with little oversight. Leaders want new facilities not managed by the Department of Corrections, instead, we envision a just transition to care-based jobs. We have thought of everything.

Saying you support the closure of Rikers is not the same as getting it done. Anyone who is committed to ending this crisis on the fastest possible timeline must advocate for a plan rooted in the wisdom of people who’ve suffered on Rikers and other city jails, and in principles of decarceration and harm reduction, with rigorous analysis of how we get this done. There is room to decarcerate further and improve conditions, but no room to stop or stall our plan.

As the land use process moves forward over the next three months, survivors of Rikers will continue to organize for improvements to the plan and to call on the City Council and advocates across New York City to join us in closing this horrific chapter of New York City history for good.

Darren Mack is Director of Community Engagement and Advocacy at JustLeadershipUSA. He was incarcerated on Rikers and has been a leader on the #CLOSErikers campaign since 2016. DeAnna R. Hoskins is president and CEO of JustLeadershipUSA, a national, member-driven advocacy organization that seeks to cut the U.S. correctional population in half by 2030. She spent time in the State of Ohio’s correctional system and previously served as a senior advisor at the Department of Justice and as the Director of Reentry for Hamilton County (Ohio) Board of County Commissioners.