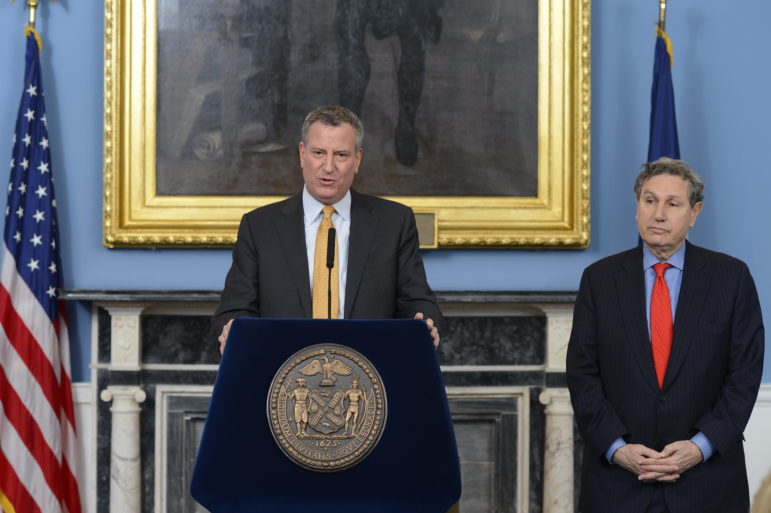 Rob Bennett for the Office of Mayor Bill de Blasio

The mayor seen in 2014 with Carl Weisbrod, his first planning commissioner and the man who cast the deciding vote on a proposal to let the CCRB investigate officers suspected of providing false statements.

In a dramatic reversal, the Charter Revision Commission on Tuesday voted to allow voters to decide whether the Civilian Complaint Review Board should be able to pursue cops who make false statements during investigations of police misconduct.

The commission has rejected the idea last week. But Carl Weisbrod, a mayoral appointee who was Mayor de Blasio’s first planning commissioner, switched his vote to create a narrow 8-6 majority to approve a ballot proposal that would–if approved by voters–re-write the charter to “allow CCRB to investigate and recommend discipline against a police officer who is the subject of a CCRB complaint, if that officer makes a false material statement within the course of CCRB’s investigation or prosecution of such complaint.”

Tuesday’s meeting was the second round of voting on proposals that will be put before the voters in November.

The 2019 Charter Revision Commission, convened last year by Council Speaker Corey Johnson, is the second in as many years. In 2018, de Blasio created a panel that looked narrowly at steps to improve democracy in the city; it proposed and voters approved three changes to the city’s governing document.

A coalition of community groups and a few elected officials have been lobbying for a move toward comprehensive planning and reform of the city’s environmental review process.

The Charter Commission’s staff had already signaled in April that no such dramatic change was in the offing, but it had recommended that commissioners consider a proposal that would have made the city’s patchwork quilt of planning mechanisms more streamlined and transparent.

On Tuesday, however, the commission shot down a proposal for a strategic planning system and never took up the staff’s more modest idea.

The panel also rejected calls to change land-use procedures in other ways, including:

• a requirement that community boards and borough presidents’ offices “must be included in inter-agency pre-certification meetings on ULURP items held by the City Planning Commission.”

That means that despite years of controversy over development, displacement, “NIMBYism” and equity, and with the affordability and climate crises nigh at hand, the system for deciding how to use land was largely untouched by the only charter revision commission in a generation with the scope to tinker with it.

Last night, in addition to approving the new CCRB measure, the panel also voted to draft ballot questions that would establish a two-year post-employment lobbying ban for elected officials and senior appointed officials and prohibit members of the Conflicts of Interest Board (COIB) from making political donations.