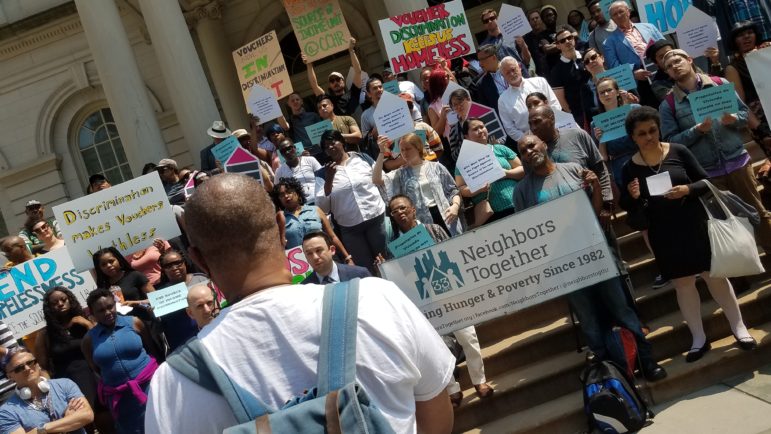 Reginald Brown addresses a rally at City Hall last week asserting that the city had failed to fund adequate enforcement of a 2008 human rights law.

While many people stand defenseless against New York City’s rising housing costs, a significant number of local renters are armed with a government voucher—a promise by the feds or the city to pay the difference between fair rent on an apartment and what a tenant can afford. All those voucher holders have to do is find an apartment to use it on.

That can be harder than it sounds.

Jut ask Reginald Brown. He said at a City Hall rally last Friday that he had held a voucher from the city’s HIV/AIDS Services Administration for six years, 10 months and 23 days – and yet was still living in a homeless shelter. What he hears from landlords, he says, is that he can’t rent because his income isn’t high enough.

“How could my income not be high enough when I have a voucher?” he wondered.

Naila, a domestic violence survivor, has struggled for a year to get housing even though she has a voucher. “The same thing happens every time” she inquires about an apartment, she says. “I know once I mention the word ‘voucher,’ stop replying.” She often pays a $200 fee for her application, only to see it go nowhere. “Basically, the city gives you a piece of paper that says ‘We will pay your rent – if you are lucky enough to find an apartment.'”

Both Naila and Brown blame their difficulties on “source of income” discrimination, which is when a landlord rebuffs a potential tenant because of their method for paying the rent.

In 2008, over the objection of Mayor Bloomberg, the City Council passed a law adding income source to race, gender, disability status and the other characteristics protected under New York’s human rights law, which is primarily enforced by the Commission on Human Rights.

Since then, source-of-income (SOI) discrimination has consistently ranked as the top form of housing discrimination pursued by CCHR, with 129 cases in 2016, 85 in 2017 and 94 last year. The issue has taken on more urgency under Mayor de Blasio because of the homelessness crisis—City Hall created several new voucher programs to get people out of shelters and into permanent housing, but there have been problems getting landlords to accept those forms of payment.

Part of the problem, critics say, is lax enforcement of the 2008 law. “The city government is not doing enough to prevent discrimination,” Manhattan Assemblyman Harvey Epstein told the Friday rally, which promoted a demand to de Blasio to double the budget for the unit of CCHR lawyers who handle source-of-income claims.

“This letter says, ‘Show us the damn money,'” said Manhattan Councilmember Keith Powers as he held a message from several Councilmembers to the mayor asking for heftier staffing. “We know that doubling the unit will double the output.”

Advocates contend that only five staffers—just one of them a lawyer—handle SOI cases at the commission. But a commission spokeswoman insists there are six staffers, three of them attorneys.

CCHR says the unit, formed in 2017, not only files court cases but has also intervened in real time to help 30 tenants who were experiencing voucher problems get apartments. The unit also sends investigators out to do tests of whether landlords are complying with the law: Last year, it did 160 such tests.

Anyone who believes they have been a victim of source of income or housing discrimination can contact CCHR at 718-722-3131.

“The NYC Commission on Human Rights is proud to have a robust Source of Income unit housed within the Law Enforcement Bureau,” the spokeswoman says. “As the body responsible for enforcing the city’s Human Rights Law, the Commission can order uncapped damages, civil penalties, and education and training for anyone who violates housing protections.”

It is illegal for landlords or brokers in the city to reject current or prospective tenants who use any form of public assistance to pay their rents, including but not limited to Section 8, Supplemental Security Income (SSI), HIV/AIDS Services Administration (HASA), Family Homelessness and Eviction Prevention Supplement (FHEPS) and City Family Eviction Prevention Supplement Program (CITYFEPS). Landlords also can’t advertise in such a way that suggests they don’t accept all legal forms of payment.

A spokeswoman for the mayor told City Limits: “We are fighting to ensure every New Yorker can live in a safe, affordable home,” noting the unit’s testing and emergency intervention powers “[enable] the city to take immediate action for clients experiencing unlawful barriers to housing while also conducting larger-scale investigations to hold bad landlords accountable.”

The Department of Social Services, which oversees the Department of Homeless Services, also has an SOI enforcement unit. It was launched in 2017 as pat of the mayor’s Turning the Tide strategy for dealing with homelessness. The office filed its first two court cases last year.

Both CCHR and DSS say they have worked hard to make renters aware of their right to use any legal source of income to pay rent. The commission held nearly 300 workshops this year to train housing providers and community groups and ran an ad campaign in print and multimedia. For its part, DSS says it produced a new renters’ guide that discusses SOI rights and trained 3,000 city workers about source-of-income discrimination.

But advocates say awareness still lags. Federal housing offers no protections against source-of-income discrimination, and the state only adopted a law banning SOI discrimination this past April. “You need to fund the unit. You need to educate people, so that when they get a voucher, they know what their rights are,” Epstein said.

Landlord groups contend the extent of source-of-income discrimination is overstated, and argue that the variety of vouchers creates challenges, especially when relatively small voucher programs are operated with limited bureaucratic support. There is also a hangover from the Advantage program, a voucher program for homeless families that the Bloomberg administration launched and then suddenly ended, leaving both tenants and landlords in the lurch.

Housing advocates say bureaucratic snags are not what explains most cases of source-of-income discrimination. “Discrimination based on a vouchers is often a proxy for discrimination by race or disability or other things,” said Armen Merjian, a senior staff attorney at Housing Works. “It’s disgusting.” He suspects that, in gentrifying neighborhoods, landlords are often keen on upgrading a building’s image—and the presence of poor and disabled people is out of step with that.

Merjian argues that what will make a real difference to the city’s SOI enforcement is not an additional lawyer or two but a significantly more robust legal staff. Large, real-estate companies often have many lawyers at their disposal—including high-profile legal talent, like former Deputy Mayor Randy Mastro of Bridgegate fame, who represented the LeFrak Organization when Housing Works sued it for discrimination. “We need a fleet to battle the fleet,” Merjian says

The de Blasio administration has simplified the voucher landscape by combining several separate voucher programs into one. While source-of-income discrimination remains a problem, the de Blasio voucher programs have moved 115,000 people out of shelter—an accomplishment that has been overshadowed by the large shelter census and more visible street-homeless population.

The administration says only 1.5 percent of families with children and 6.9 percent of single adults return to shelter after receiving subsidized housing.