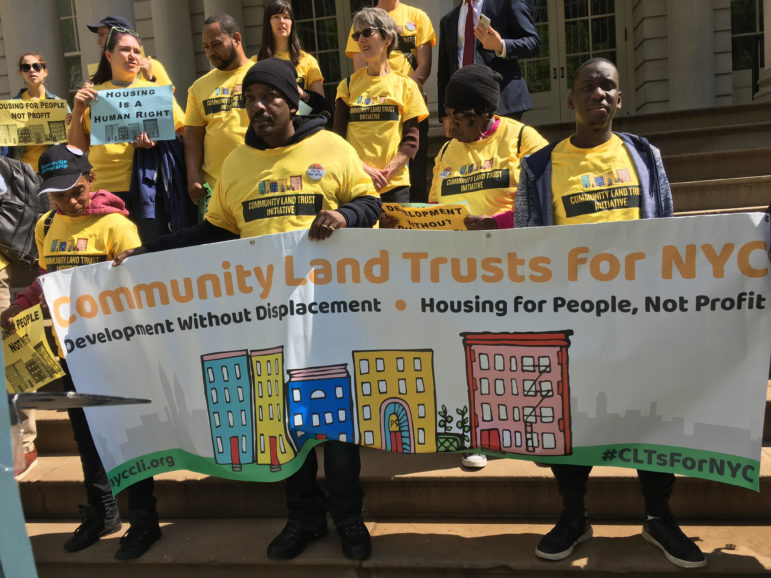 Over a dozen stakeholders and community-based organizations along with a group of elected officials are seeking monetary support for an initiative to help community land trusts get going or hit stride.

The initiative would require an estimated at $850,000 from the City Council’s discretionary fund. It would foster work toward creating mutual housing and limited-equity cooperatives, identifying single-family homes at risk of foreclosure, and development other projects such as commercial and community spaces, gardens and green infrastructure, and other neighborhood assets.

“We have to take bolder approaches to fighting the [housing] crisis we find ourselves in,” said Richards. “People are being priced out of their neighborhoods. People do not feel they are benefiting from these rezonings.”

A community land trust is a community-governed, nonprofit entity that sells the housing or other buildings on its property but retains ownership of the land. Advocates say the unique ownership structure helps ensure the buildings remain permanently affordable and that decisions about the building are made democratically.

In 2017, the city released a Request for Expressions of Interest, calling on groups to submit proposals detailing how they would develop and manage CLTs and the de Blasio administration followed up with grant funding from Enterprise Community Partners worth an estimated and $1.65 million for a variety of CLT projects. In the same year, the City Council passed legislation officially codifying CLTs and allowing the city to enter into regulatory agreements with them.

The 2017 funding came from a settlement with banks negotiated by State Attorney General Eric Schneiderman. This year, newly-elected Attorney General Tish James announced an estimated $8 million dollars in CLT funding; the monies come from another settlement with a international banking company that was held accountable for taking part in the housing crisis. The award will be available through Enterprise Community Partners.

The Council funding being sought now would not be used to acquire property but would help with the planning and collaboration that needs to occur before a CLT acquires property.

Some community land trusts have been in operation for decades and are looking to expand while others are finding their way through the bureaucracy of planning and funding.

There are community land trust organizations located in Edgemere, Harlem, the East Village and Inwood, Brooklyn and the South Bronx neighborhoods.

Other community land trusts (CLTs) are not location-based. Interboro CLT, a new partnership between the Center for NYC Neighborhoods, the Urban Homesteading Assistance Board, the Mutual Association of New York and Habitat for Humanity, is also seeing to create affordable homeownership opportunities in southeast Queens, Edgemere, central Brooklyn, and ultimately citywide. That plan includes flood protections, housing development and investments in a Sandy-hit part of the Rockaways.

Richards said he is hoping to see more funding towards CLTs for the future homeowners in his district.

“So we consider holistically from a neighborhood perspective the small business and residential affordability go hand in hand. The kind of underlying challenge that we see is the speculative nature of real estate and when you see tenants living in residential buildings are often faced with a pressure in terms of rent increases, harassment and hold over cases many times because buildings are being bought and sold,” said William Spisak, Director of Programs at Chhaya CDC. “The same thing goes for homeowners. A lot of homeowners bought homes in low, moderate income neighborhoods in Queens when they arrived as immigrants in neighborhoods during White flight. But now as real estate speculation has kind of creeped in we see homeowners that have lived in these homes for a long time facing increasing property taxes and they have a hard time keeping up with those payments. They are facing harassment and scam from house flippers.”

The Community Land Trust Initiative has short-term and long-term goals. In the short term, the initiative would foster 50 education and organizing sessions for 2,500 tenants and homeowners; provide 25 technical assistance engagements to emerging CLTs; and formalize CLT incorporation and partnerships in all five boroughs. For its’ long-term goals, the initiative would continue to preserve thousands of permanently affordable housing units; provide affordable commercial space for hundreds of small and cooperatively-owned businesses; and ensure accountable, community-led development.

This is a second attempt to get full funding for the program. Last year the program asked for an estimated $735,000 in discretionary funding but the request was never met, according to the New Economy Project. This year the goal is for the entire amount of $850,000.

The Cooper Square Mutual Housing Association, which has existed since 1991 and supports the initiative, said the funding is too little to help with acquiring actual property but would help with planning, preparation and collaboration to acquire property.

Levine said putting ownership back into the hands of the community “guaranteed growth and continuity.”

The CLT Initiative consists of over a dozen community-based organizations and four technical support organizations from across the city. The technical support groups to receive funding are Community Development Project, which will provide legal support on CLT incorporation, bylaws and other matters; City College of New York, which develop training curricula on CLTs; New Economy Project, which will provide research, training, and overall coordination for the CLT Initiative, including tracking progress and ensuring timely reporting and compliance; and Picture the Homeless, which will provide training and mentorship on community and CLT organizing.

“Over the long-term, the initiative will support creation and preservation of thousands of units of permanently affordable housing for low-income New Yorkers,” said Julia Duranti-Martinez, CLT Coordinator at New Economy Project, in a press release. “Community land trusts are part of a broader movement for cooperative and community-led development, including worker and financial cooperatives, mutual housing, and community-owned renewable energy initiatives.”

The city’s Housing Preservation and Development has been working with CLTs.

HPD said that while the community land trusts method has not been used widely in New York City, “Communities have expressed a strong interest in forming CLTs to ensure local control over future affordable housing sites. We’re now exploring how CLTs, layered on top of HPD’s existing affordable housing programs, can be yet another tool we use to lock in long-term affordability for New Yorkers.”