Opinion: Legalizing Prostitution in NYS Would Ignore its True Costs 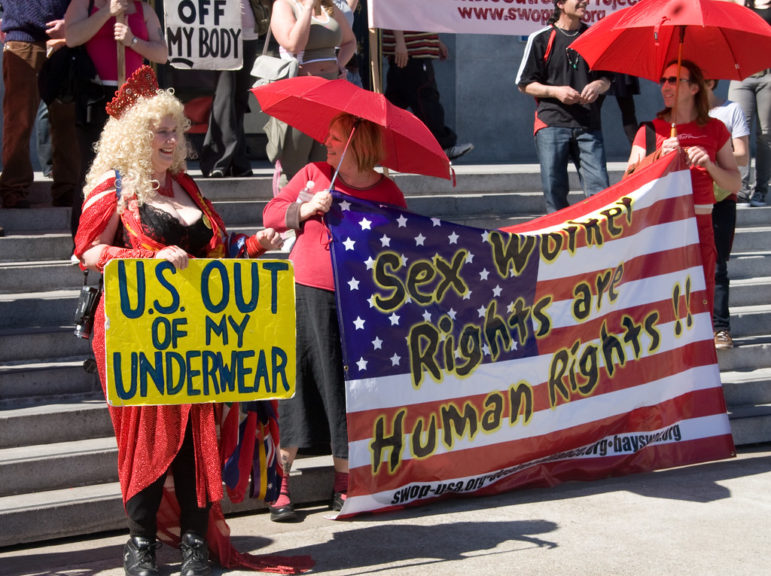 A pro-decriminization protest in San Francisco.

Over the past few months, several strong voices have emerged in favor of full decriminalization of the sex trade in New York State. This comes on the heels of similar movements in other jurisdictions, including Washington D.C. The average citizen likely has no idea what it means to decriminalize the entire sex trade. So, let us translate: it means allowing pimping, brothel-owning, and buying of sexual services to become big business in New York City, at the expense of some of the most marginalized members of our community.

As advocates for survivors of sexual violence and exploitation, we have watched with intense interest as cases of sexual harassment and assault in Hollywood, professional sports, popular music, and other industries have unfolded in daily headlines. And while those exploited through prostitution have been excluded from the #metoo movement, they now face legislation and politicians who could make things far worse.

Like women preyed upon in Hollywood and elsewhere, the vast majority of people in prostitution are in vulnerable positions and exploited by men with power: a homeless girl coerced into the sex trade for food or housing; a Transgender woman purchased repeatedly by violent men; or a woman under pimp control with quotas and beatings if she doesn’t reach them. These individuals all have one thing in common: vulnerability and lack of choices.

In both cases of prostitution and sexual harassment, power and control are exercised by those with choices over those without. A Hollywood executive who coerces a woman to have sex is no different than a privileged businessman buying sex.

Whether paid or not, sexual harassment and exploitation in the workplace or in a brothel cause the same damage. Whether it is Harvey Weinstein sexually assaulting actresses wanting Hollywood careers; R. Kelly raping teenage girls hoping for record deals; or Robert Kraft purchasing sex from trafficked women, acts of sexual exploitation dehumanize and objectify the victims.

Cringe-worthy media reports often speculate about the consent or complicity of survivors. If consent is coerced, it is never consent. When a power imbalance exists, the notion of choice becomes obtuse. Similarly, when the ubiquitous phrase “sex work” is used to describe a system of abuse, we must remember that money cannot buy consent.

Prostitution is referred to as “the oldest profession” and a “victimless crime.” It is neither. Prostitution is highly traumatizing and often life-threatening.

A staggering percentage of survivors grapple with post-traumatic stress disorder, anxiety, depression, suicidal ideation and dissociation, having had to detach from their bodies just to stay alive like the teenager traumatized when her pimp burned a mouse alive as a warning if she tried to leave; or sex-trafficked women consenting to their exploitation out of fear for their lives; the undocumented immigrants working in massage parlors thrown out on the streets when they refuse buyers; and women who try to exit the sex trade fall victim to further exploitation because they have no marketable skills, education, or sense of self-worth.

Sex buyers don’t care whether the women or children they purchase are trafficked or abused or underage. They want sexual gratification and the power to exert control.

Fortunately, society is finally starting to turn against men who exploit their positions of power. Yet, inexplicably, some policy makers now want to legalize such a system of exploitation. Decriminalizing the sex industry would declare that women and girls, the LGBTQ community, people living in poverty, and people of color, are commodities to be bought and sold.

It’s beyond comprehension why anyone would want to decriminalize an industry of abuse and violence which profits from the commodification of human beings.

We need a legislative model shown to reduce the commercial sex market, increase safety, provide services for survivors, and hold men accountable for the crimes they commit. Such a legal framework, initiated by Sweden in 1999 is now in place in Iceland, Norway, Northern Ireland, Canada, France, and Israel. It solely decriminalizes individuals who are bought and sold, while targeting sex buyers. Survivors are provided with exit strategies and services, housing and medical treatment.

Let’s see prostitution for what it is—gender-based violence. It’s time to listen to survivors and demand an end to sexual violence.

The answer is not making it legal to pimp or buy sex. The answer is ensuring that we respect the full equality and dignity of every human.

24 thoughts on “Opinion: Legalizing Prostitution in NYS Would Ignore its True Costs”