Doubts on the Details of the City’s Bushwick Rezoning Proposal 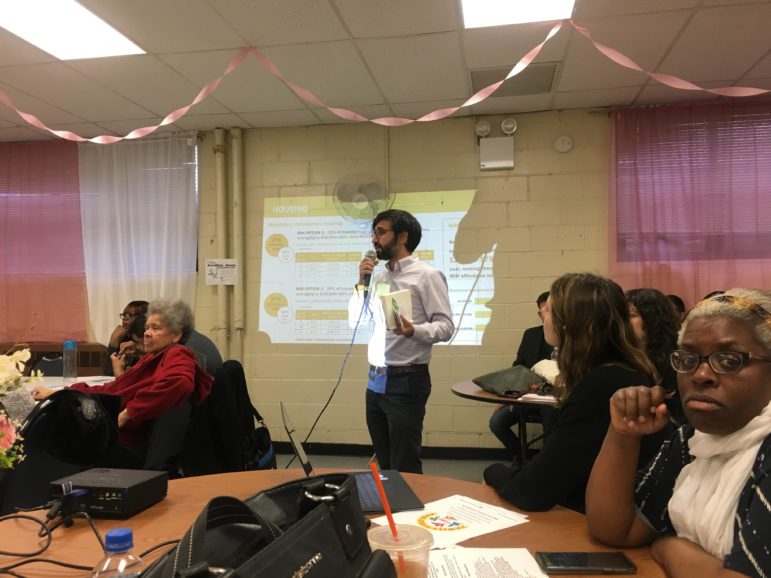 Bushwick community board members, residents and homeowners raised concerns about height, affordability and whether the city was trying to get new credit for old promises at a Thursday meeting about the de Blasio administration’s draft rezoning plan.

The city last month presented its plan, which differs from a vision for the neighborhood crafted over several years by a coalition of local stakeholders, last month. Some advocacy groups in the neighborhood oppose both the de Blasio proposal and the Bushwick Community Plan, saying they are worried that development brings too high a risk for displacing low-income people.

The de Blasio administration has already rezoned five neighborhoods–East New York, Downtown Far Rockaway, East Harlem, Jerome Avenue, Inwood–to increase density, paving the way for more market-rate and income-targeted (a.k.a. “affordable”) housing. Besides Bushwick, there are pending plans for Bay Street in Staten Island and Gowanus in Brooklyn. Discussions are at an earlier stage about rezoning Southern Boulevard in the Bronx.

The de Blasio proposal would cap heights on interior blocks to preserve neighborhood character while raising height limits on big corridors to increase density. It was the proposals for interior blocks that attracted two sets of questions Thursday night.

One came from Community Board 4 Land Use Committee Chair Martha Brown, who asked why blocks currently zoned for R3 or R4 (low density designations for detached single-family houses or row houses) were slated for caps of R5B or R6B, which are higher density. That was a concern, Brown said, “because to me that would give the developers more of a chance to get three or four plots.”

In other words, it wasn’t the slightly increased density that worried Brown, but the possibility that the existing lower-density parcels would be easier for developers to buy in bundles in order to create bigger lots that would then permit larger buildings.

Sarit Platkin of the Department of City Planning said the proposed zoning R5B and R6B for density would also put restrictions on heights which would not allow developers to practice site assembly or out-of-context development.

She added the zoning restrictions were a preservation method — something the Bushwick community rezoning plan wanted.

Peter Marrero, a lifetime Bushwick resident and homeowner, had a different take on the proposed mid-block restrictions: He lives on a parcel where the proposed zoning cap would be tighter than what now exists, and he is concerned the tighter caps would constrain his ability to profit from his years of investment in the neighborhood.

“Right now I can sell my home easily if I ever want to retire and move to Puerto Rico, China, or anywhere,” Marrero told City Limits. “This rezoning will take those options away. We were the ones that stayed. This is a disadvantage for long-term residential homeowners.”

He was not alone: Another homeowner made a similar plea that downsizing the zoning would not help minority homeowners. DCP said that they would listen to their reasons and they would have a chance to address their concerns in the environmental review process, which should start soon.

The city plan calls for zoning in the transit corridors–along Broadway, Myrtle and Wyckoff avenues–to promote higher density and mixed-use development (which includes residential, commercial and industrial). In these areas, the city proposes zoning for C4-5A, C4-5D, C4-4D, R7A where heights could reach up to 16 stories in some areas. The zoning for the transit corridors would trigger city’s Mandatory Inclusionary Housing (MIH) program for affordable housing.

Ariella Riapos, a member of G-REBLS, one of the groups that opposes both the community plan and the city plan, asked what affordability levels could the community expect. She contended the current options would not work for Bushwick resident and seniors. Riapos said seniors were on a fixed income and doubted they would be able to afford some of the income ranges in the MIH program.

DCP said all affordable housing options were available for the area but noted the community plan had called for MIH options 1 and 3.

The Deep Affordability Option or Option #3 requires that 20 percent of the rent-restricted units be affordable to families making 40 percent AMI, or $37,560 for a family of three.

(Option #2 requires developers to set aside 30 percent of units for families making an average of 80 percent AMI, or $75,120 for a family of three. Option #4, also known as Workforce Option, requires that 30 percent of the rent-restricted units are affordable to families making 115 percent AMI or $93,900 for a family of three, with required percentages at several different income bands. Developers using the Workforce Option cannot use public funding. And Options #3 and #4 cannot be applied by themselves—they must be selected alongside one or both of the first two options.)

Playing games with a playground?

Still, CB4 District Manager Celeste Leon reiterated Dent’s question. “For clarity’s sake, we have been working on it and this money has already been set aside and allocated. I think it was implied that the plan should not be there to begin with.”

The meeting ended with CB 4 Chair Roberto Comacho telling the city agencies that if the rezoning draft plan was not at least close to the community plan, the community board had the right to reject it.

City Planning says it expects a draft scope to be released this month followed by a public hearing on the scope in June. DCP projects the Bushwick plan to be certified in the winter to trigger the seven-month Uniform Land Use Review Procedure, in which the community board and borough president get advisory votes before the Planning Commission and City Council make binding decisions on the plan.