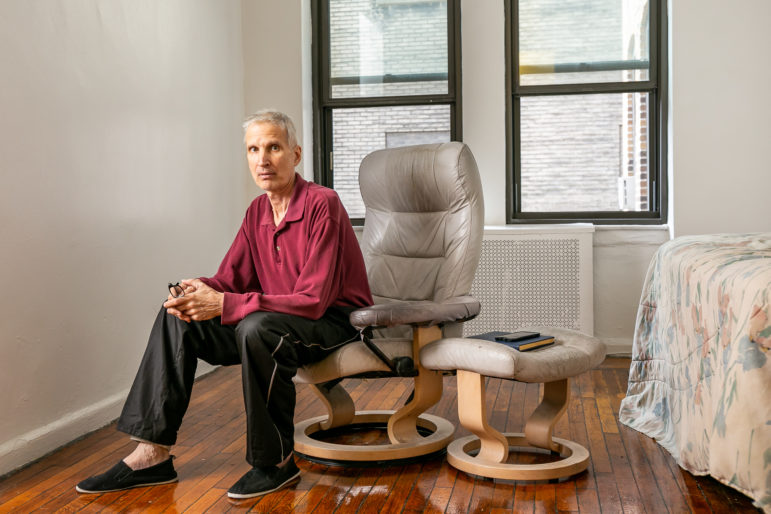 Jim Green (66) in his studio apartment at Hamilton House on the Upper West Side of Manhattan. In September of 2018, Green a semiretired Tai Chi, Qi Gong and meditation teacher moved from his 4th floor walk-up apartment on Charles Street in the West Village where he had lived for 41 years.

New York City is sitting on the leading edge of a major storm that’s about to make landfall: How and where is the city going to house its burgeoning senior citizen population? If left unresolved, its impact will have dire and far-reaching consequences that will encompass many sectors of our economy and social structure.

Today, New York City doesn’t have enough affordable senior housing to meet current demand. Affordable senior housing does exist – public, private, and combinations of the two – but waiting lists are seven to 10-years long, and you can’t get on them until you turn 62. For example, the Frances Goldin Senior Apartments on Delancey St. in lower Manhattan opened in January 2018 and received 65,000 applications for its 99 units.

What is readily available? Buildings such as the Inspir Carnegie Hill. With rates starting at $13,000 a month, you’d better have a winning lottery ticket stashed in your retirement account, assuming you’ve got one.

And this is not just a problem for low-income seniors; it also affects middle-class seniors who are “aging into poverty,” says Rush Perez, a spokesperson for Margaret Chin, chair of the City Council’s Aging Committee. That can be the result of long-term unemployment, under-employment because of age discrimination, or other factors such as illness, medical debt, or loss of a second income due to death or divorce.

LiveOn NY, a senior citizen program and policy organization, in a 2017 report painted a somber picture: In Manhattan community districts 7 and 9 (upper west side) alone some 19,700 seniors were waiting for only 45 yearly affordable-housing openings. Allison Nickerson, the organization’s executive director, estimates the citywide waiting list is over 200,000. “A shocking 65 percent of single elderly households living in rent stabilized units pay more than half of their income on rent,” Nickerson adds.

But those are just the current numbers; the projected ones are even higher. By the year 2030, the city’s over-65 population will be 1.35 million, 14.8 percent of its total. Think of it this way: in just 11 years, every Baby Boomer will be between 65 and 84 years old. And with other basic costs – healthcare, housing, food – rising, and the huge numbers of Boomers unprepared for even healthy retirement … well, do the math.

Christian González-Rivera, a senior researcher at the Center for an Urban Future and co-author of the February report “New York’s Older Population is Booming Statewide,” notes that “advocacy for older adults has been focused on services, such as senior day centers, not housing and other needs, and there’s no recognition that this is a huge problem now and is getting bigger.”

Gonzalez-Rivera cites the various service provisions in the 1965 Older Americans Act (OAA) as an example. “The OAA hasn’t really changed since it was first implemented more than half a century ago, yet we have seen dramatic changes (such as longevity and demographics) in the population.” Some of those policies make no fiscal sense today, he says. For example, “Medicaid will pay $150,000 a year for a nursing home in the New York City area, but it won’t pay for vastly cheaper services to prevent someone from needing to go to a home.”

Microcosm of a larger problem

Even those fit and healthy in their early senior years are likely to need amenities that address the physical limitations that accompany aging. And although most seniors would prefer to age in the homes they’ve lived in for years if health permits, New York’s housing stock can make that difficult with barriers such as stairs, bath tubs, and hallways and doors too narrow to accommodate a walker or wheelchair. Those who own an apartment or a house may find prohibitive the cost of renovating even a bathroom to make it safer and easier to use.

Cashing out of a co-op apartment or house may sound like a good idea and yield a big chunk of cash, but the lack of regulation on market-rate apartments could mean what’s doable at the initial rent isn’t sustainable.

Matthew Creegan, deputy press secretary at the Department of Housing Preservation and Development (HPD), said in an email statement that “our financial commitment to senior housing has increased – from $40 million in total public resources in FY14 to more than $425 million in FY18. Robust pipelines for FY20 and FY21 ensures that more senior housing units will come online every year.” Yet when asked for specifics, he declined to give them and referred City Limits to the abstract description on the city’s website.

But even the most optimistic commitment from the city doesn’t come close to meeting the current or future needs, says Grant Lindsay, Lead Organizer with East Brooklyn Congregations (EBC), an affiliate of the Industrial Areas Foundation (IAF) an affordable housing advocacy group.

Lindsay says the mayor’s target of 30,000 senior units by 2026 “isn’t a real number, but a combination of loans to existing housing to maintain the current level of relative affordability, retrofitting some housing, and a few new units.” He says the question to ask is “how many seniors on the current waiting lists will get that housing?”

“Retrofitting might buy some people a few years, but there is no magic number that says at 70 years old you’ll need X and at 80 you’ll need Y,” Lindsay says. “Affordable senior housing has to take the whole range into consideration.”

Senior housing is just one of the city’s financial challenges, and adding to the city’s burden is the effective eradication of federal programs to defray costs, says Chris Widelo, AARP’s associate state director for New York. He emphasizes that the consequences of not adequately addressing the problem will result in more strain on an already overburdened medical system as well as other parts of the economy. In addition, many New Yorkers will be forced to leave the city and take their money out of the local economy. It will also cause the city to lose a vital part of its social fabric.

Widelo notes that the lack of assistance from the federal government contributes to the senior housing shortage. The Housing and Urban Development (HUD) Section 202 program, designed to provide capital advances to private and non-profit organizations to finance housing for the elderly is “on its last legs,” and the HUD Section 8 rent-voucher program is “stagnant with no vision for the future.”

In addition, says Widelo, New York City programs such as the Senior Citizen Rent Increase Exemption (SCRIE), which freezes the rent in rent-regulated buildings, and Senior Citizen Exemption (SCHE) for co-op and homeowners over 62 with incomes under $50,000, are underutilized, under-promoted, and need to be augmented.

New York City’s current senior housing runs the gamut from 100-percent-senior New York City Housing Authority (NYCHA) buildings to ultra-luxury and mirrors the city’s overall housing landscape – an increasing number of pricey buildings and facilities affordable to only the rich and affordable apartments funded by government and non-profit groups for the rest.

Given the shortage of appropriate housing, service and advocacy organizations are trying to come up with innovative solutions. The New York Foundation for Senior Citizens, runs a home-sharing program, which pairs New Yorkers who have an extra room with a roommate, provided at least one of them is at least 62 years old, and SAGE, the advocacy group for LGBT seniors, is opening two senior residences in the Bronx with a total of 228 units, with the assistance of the Senior Affordable Rental Apartments (SARA) program through HPD.

In 2018, Mayor de Blasio committed to building up to 1,000 units of senior housing on vacant NYCHA and other public land. Yet now that commitment seems vague. While six sites had been identified, to date the city has requested development proposals for only one. And where $500 million was promised, only $100 million comes from the city’s capital budget. The rest will come from other sources and will be allocated sometime in the future. Plus, those 1,000 units were already included in the 30,000-unit goal committed to in 2017.