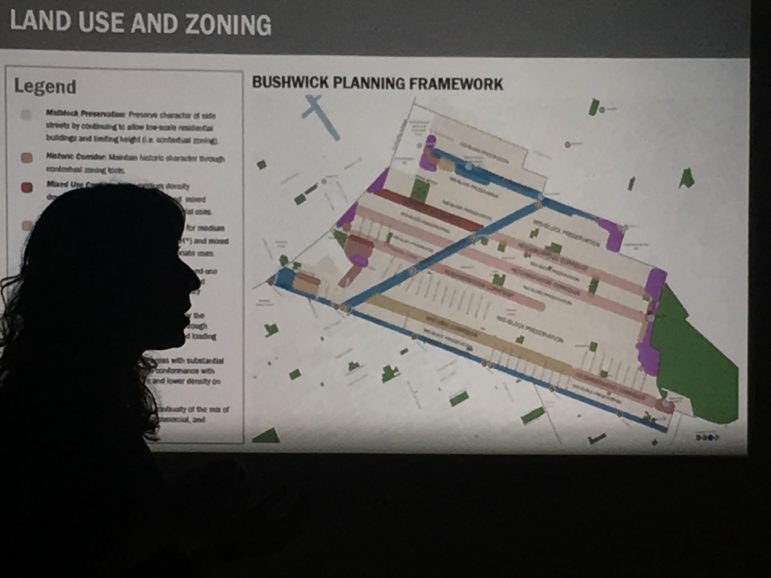 The city’s presentation is a step toward likely certification of a proposal to actually change the zoning.

After fours years of community engagement with city agencies, Community Board 4 members and attendees listened intently to the city’s draft presentation but because of interruptions by community activists who oppose any rezoning — whether the city’s plan or the community-generated one — many did not get an opportunity to ask questions about the draft proposal.

The city’s draft proposal comes after some in the Bushwick community decided to craft their own rezoning itself after watching out-of-context development, rapid displacement and rising rent prices transform the area. The Bushwick Community Plan steering committee, under the leadership of Councilmembers Antonio Reynoso and Rafael Espinal, presented its own plan last year in September.

Now the de Blasio administration, as part of its work toward rezoning 15 neighborhoods to create new density and edge the city toward the mayor’s goal of creating or preserving 300,000 units of income-targeted housing, has put forth its own vision.

How the city sees Bushwick’s future

“At this point, our work, is really trying to build on the work of the [Bushwick] steering committee,” Sarit Platkin from Department of City Planning said. “We’re trying to kind of take all the goals and strategies, put in that plan, really advance the strategies that are shared goals and that we see as the goals that would have the greatest lasting impact in the Bushwick community.”

On housing, the draft plan proposes to use existing tools to preserve housing from tenant protection initiatives such as the Certificate for No Harassment (CONH) to the Neighborhood Pillars program that helps community-based organizations to acquire rent-stabilized buildings. For property owners, the city proposes to incentivize landlords to extend or enter into regulatory agreements by offering grants or loans. It also proposes to provide funding for community land trusts for new affordable housing.

The administration also said it wants to make the housing lottery application process easier for Bushwick residents, hire local affordable housing developers and create 100 percent affordable housing. The levels of affordability have not been defined but Housing Preservation Development  Deputy Commissioner of Neighborhood Strategies Leila Bozorg said the Mandatory Inclusionary Housing program and other affordable housing strategies would be part of the final plan.

On land use, the city proposes midblock preservation on side streets to be zoned for R5B and R6B, where the height will be capped between three and four stories, depending on the floor area ratio, in order to preserve existing character of the neighborhood. The midblocks of the neighborhood make up 70 percent of the rezoning study area.

On avenues such as Central, Wilson and Knickerbocker, the density would be increased at a “modest rate” with affordable housing and an allowance for commercial use. The city proposes those avenues to be zoned for R6A and R7A, which would allow for building heights to reach between seven to eight stories.

For transit corridors along Broadway, Myrtle and Wyckoff avenues, the city aims to promote higher density and mixed-use development (which includes residential, commercial and industrial). In these areas, the city proposes zoning for C4-5A, C4-5D, C4-4D, R7A where heights could reach up to 16 stories in some areas. DCP said in order to build under and above the elevated train, buildings would have a lower base which would then allow for two additional upper stories. The greatest density would be Broadway where heights could reach from 11 stories to 16 stories maximum; on Myrtle Avenue heights could reach from nine to 13 stories by the elevated trains, according to Platkin.

For industrial areas along Wyckoff and Flushing avenues in the northwest and Wyckoff Avenue and Moffat Street in the east, the city has proposes M3, M4 and M5 contextual manufacturing districts which would allow buildings heights to reach from eight to 14 stories depending on the floor area ratio. DCP said they wanted to preserve the use of the area but also put in height limitations and eliminate parking requirements.

Other parts of the proposal include improvements to transit corridors such as pedestrian safety, additional bicycle lanes and ADA improvements and repairs for subway stations along the J, M, Z and L subway lines. For economic development, the city proposes commercial lease assistance programs and local job-training programs. The city’s Small Business Services plans on deploying its mobile unit this spring. DCP says the city has already invested $10 million in open spaces for Bushwick parks and proposes to include public programming as well.

Additional initiatives the city proposes include expanding addiction-treatment and  mental health services, and broader testing for communicable diseases such as Tuberculosis and Hepatitis C. The city also plans on making access to healthy foods a priority for the Bushwick community.

How does Bushwick see the city’s proposal?

Although the city’s neighborhood draft plan addresses some of the concerns raised by the Bushwick community, many are skeptical about the plan working for their community.

Martha Brown, Land Use Committee Chair for Community Board 4, said that in her 25 years in the community she has not seen opportunities for affordable housing for low-income households, “So this affordable housing you are speaking of is a dream and you gotta make $72,000 a year just to get a studio deal in the neighborhood,” she said.

Groups such as the Movement To Protect People disrupted the meeting a few times to ask what affordable meant for the city’s planning agency. Housing advocates and elected officials showed concern over how much more density the city had planned for the area compared with what the Bushwick Community Plan steering committee had laid out in its plan.

“I think they fell short. But if we didn’t have this process, I can only imagine how much worse it would have been,” said Reynoso.

Reynoso said the Bushwick Community Plan (BCP) did not call for manufacturing to residential development, which the city has outlined in their proposal. The community plan also focused on preservation, and resisted zoning to create new market-rate housing. “The introduction of more market-rate is bad for them so they don’t see that as a win — they see that as an introduction to gentrification. And in this presentation there is more than 8,000 units of market rate housing,” Reynoso said.

Make The Road New York and Churches United For Fair Housing (CUFFH) also felt the plan fell short of the community’s goals. CUFFH Network Director and member of the Bushwick Community Plan steering committee Alex Fennell said the city proposal to downzone most of the Bushwick area was similar to the community plan but that is where the similarities stopped.

“The Bushwick community plan had four fundamental principles throughout this whole process. And the first was preservation of residential mid blocks, no manufacturing to residential rezoning, no additional total units and no R8A on Broadway except where there was 100 percent affordable housing,” said Fennell. “When I say no more total units and no action, that means that what we wanted for community is the number of units that could be built right now under this current zoning. We didn’t want more than that. And so they’re planning obviously has significantly more units.”

Fennell said the city did not present anything beyond Mandatory Inclusionary Housing programs which is not inclusive enough for the Bushwick community and did not lay out any restrictions on the types of industrial uses.

“So I think that what we’re going to see at the end … is tons of luxury residential and office space rather than the industrial jobs that the Bushwick community plan has been advocating for throughout this entire process,” said Fennell.

Jose Lopez, Organizing Director for Make The Road New York and member of the Bushwick Community Plan steering committee, said the city did not give the detailed analysis of the proposed zoning that the Bushwick community deserved after years of planning.

“I wanted them to tell us how their new zoning map would impact the overall count of new units expected. Of that total count, I want to know how many more units above the current no-action scenario will be generated, how many will be market rate and how many will be affordable,” said Lopez. “And when we talk about the range of affordability, I want them to give us the actual cost of a studio, one bedroom or two bedroom instead of giving us answers that don’t really make sense to people. I also want to see how public sites are layered into the mix; which public sites, how much density on those public sites and what term sheets would be applied on those public sites.”

The city’s neighborhood draft plan not give the number of total housing units they expect to see in Bushwick. Those projections would be revealed during the analysis of the draft scope (a city document that maps out the environmental impact study that must commence before the project can move into the city’s Uniform Land Use Review Procedure, or ULURP).

The city said this presentation would be the first of many to come for Bushwick residents. On May 15th, the city will present its proposal again during the community board general meeting at Hope Gardens Multi Service Center, located at 195 Linden St. at 6 p.m. City Planning says it expects a draft scope to be released next month followed by a public hearing on the scope in June. DCP projects the Bushwick plan to be certified in the winter before ULURP.

The city’s neighborhood draft plan can be read here.