Opinion: What the Data Says About Child Welfare in New York City 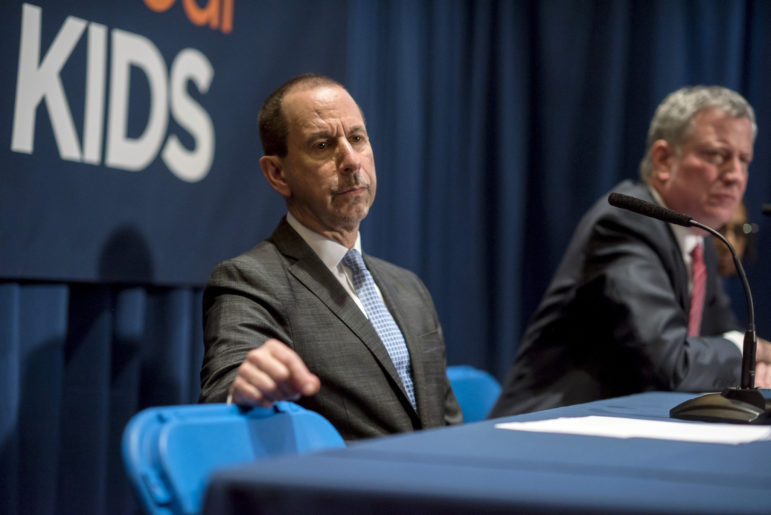 David Hansell was appointed commissioner of the Administration for Children’s Services (ACS) in 2017.

When I became Commissioner of New York City’s Administration for Children’s Services (ACS) two years ago, I vowed to ensure that we’re protecting children and supporting families and I committed to use data to measure whether we’re reaching the right outcomes.

New data from 2018 shows that we’re moving in the right direction – and that we must continue investing in work that is helping our city’s most vulnerable children and families.

ACS investigates about 60,000 reports of suspected child abuse or neglect every year. We don’t choose which cases to investigate; we’re required to investigate every report that’s forwarded to us by the State hotline, which fields calls from teachers, doctors, neighbors, and members of the public.

When we start an investigation into alleged abuse or neglect, our first priority is making sure that the child is safe. More children are now able to stay safely at home with their families, thanks in part to evidence-based prevention services we’ve expanded in New York City. On any given day, families with 25,000 children are receiving these services, which include a wide range of services such as intensive family therapy, drug treatment, domestic violence advocacy, assistance with housing, benefits and child care, and coaching for parents. These services are helping parents provide the safe, healthy, happy homes that children need in order to thrive.

However, if we find a child in imminent danger of serious harm, and there is no alternative that will keep that child safe, we must remove the child for his or her own safety. In 2018, removals happened in 2,060 investigations. We carefully balance the need to ensure the child’s safety with the parent’s rights to due process.

In the vast majority of cases, children remain at home while parents take part in prevention services. Most often, parents participate in these services voluntarily. Sometimes, we need to obtain a court order to ensure that they participate, or that an abusive parent or relative is excluded from the home in a domestic violence situation, because that’s how we are able to ensure that a child remains safe. We aim to use court orders only when necessary, and in 2018 the number of children in cases in which ACS filed for and received court-ordered supervision decreased by 20 percent from 2017. Every removal must be reviewed in family court before a child is remanded to foster care. In some cases, we remove a child on an emergency basis and then seek a court order the next business day.

For example, our caseworkers might conduct an emergency removal if a child has serious bruises and cuts that were caused by a parent at home, but the report was received at night or during the weekend when the family court is closed. We will not send that child back into a dangerous home for the night and wait to go to court the next morning. Instead, we will remove the child on an emergency basis, and file with the court first thing the next morning.

We will always need to seek court-ordered supervision in some cases, and we will always need to conduct some emergency removals. That’s the unfortunate reality of the extremely difficult and important work that ACS’ frontline staff does 24 hours a day, 365 days a year. But we have strengthened our decision-making in these cases – making sure that we’re taking action when children’s safety is at stake, and that we’re supporting families appropriately – through a range of reforms we’ve put in place over the last two years, including enhanced training on safety and risk, expanded technology to give caseworkers fuller and faster access to information, and increased oversight and consultation from managers, law enforcement experts, and medical professionals.

Ultimately, the most important data we monitor is whether children are safer as the result of our protective and preventive work. In 2018, fewer than 1.5 percent of families that completed prevention services had a child who was later removed and placed in foster care. We also know that nearly 10 percent of families with an “indicated” case (an investigation that uncovered evidence of abuse or neglect) that were referred but didn’t take part in prevention programs ended up having a repeat indicated investigation of abuse or neglect within six months. That’s why we continue to seek court orders when participation in prevention services is needed.

We are continuing to examine our work critically, identify areas for improvement, and make reforms. The most recent data shows us that we’re on the track – and that we need to keep moving forward.

David A. Hansell is commissioner of the New York City Administration for Children’s Services.

One thought on “Opinion: What the Data Says About Child Welfare in New York City”