Time to Avoid Some Voids? City Planning Thinks So. 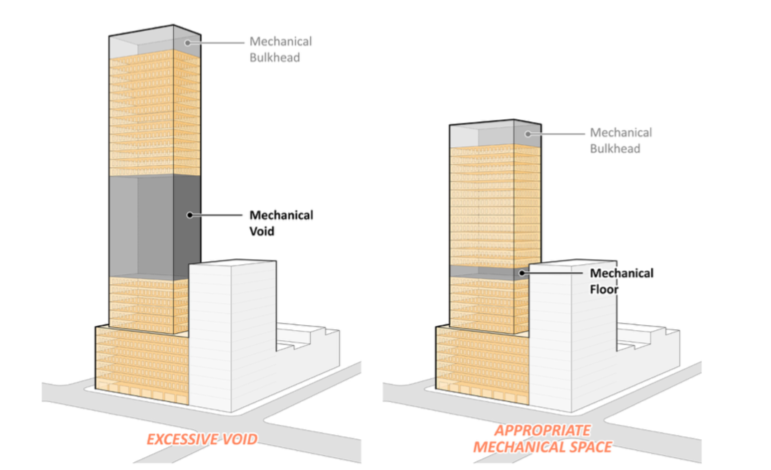 Like everything else, there are bad voids and good voids in the world, says City Planning.

After pushback from the Upper West Side community and elected officials, the City Planning Commission announced Monday it will be reviewing a text amendment to limit voids: non-residential spaces in residential buildings created to augment the height of a building.

Generally, mechanical voids are floors with high ceilings in a building. They are non-essential and can be used for amenities such a gym, pool or a common space for events in the residential buildings. But UWS community members say property owners have been designing buildings with unnecessary voids just to increase the height of the building and, therefore, the market value of the views from it.

The Department of City Planning said they will use a two-phase approach: first issuing a limitation on the use of excessive voids in several community boards where tall buildings that could use such voids are common, and later this years pursuing a broader rule.

“Creating large, enclosed and empty spaces within a building for the sole purpose of making it taller and enhancing views of residents on the top floors is not what was intended by our zoning rules. This proposal offers a simple and elegant fix to ensure that apartment buildings produce housing, that their size is predictable for communities, and that they can’t play leapfrog with our skyline. We welcome innovative and beautiful architecture, not building features that are nakedly gratuitous,” Department of City Planning Director Marisa Lago said in a press statement.

DCP said in its statement they examined hundreds of as-of-right buildings permitted from 2007 to 2017. In its research, the city planning agency found “few instances of excessive mechanical void spaces being used but the analysis did support concerns raised by the public.”

The proposal will limit the use of mechanical voids in high-density areas such as the Bronx, Manhattan and parts of Queens while allowing flexible design measures,
according to DCP.

The proposed regulations for residential buildings will require that any mechanical void space taller than 25 feet, sufficient to accommodate a modern mechanical story in a residential building, must be deducted from the maximum allowable floor area for the building. It will also discourage the clustering of mechanical void spaces in a way that unduly pads building heights by deducting from the maximum allowable floor area for any mechanical or void floors located within 75 feet of each other. And the same 25-foot threshold will apply in mixed-use buildings if non-residential uses occupy less than 25 percent of a structure.

The text amendment proposal now heads to 30 days of public review by Bronx Community Board 4, Manhattan Community Boards 1-11 and Queens Community Boards 2 and 12, as well as the Bronx, Queens and Manhattan borough presidents, after which it would return for review to the City Planning Commission, according to the DCP.*

Two planned buildings in Manhattan were the catalyst behind the zoning change – 249 East 62nd Street and West 66th Street – with potentially excessive mechanical voids drew concern from community groups such as Committee for Environmentally Sound Development and Landmarks West!.

In September, Upper West Side residents and a preservation group filed a zoning challenge against Extell Development’s residential tower on West 66th Street with the Department of Buildings. The challenge alleged the luxury developer had drafted a 161-feet mechanical void space that starts at the 18th floor. After thorough review, the Department of Buildings moved earlier this month to revoke the building permit.

City Council members of the Manhattan Delegation pressed the DCP for zoning changes in their neighborhoods in a joint letter sent earlier this month, “We, as city policymakers, cannot argue for the predictability of an as-of-right framework for the real-estate community while simultaneously dismissing the concerns of community groups and elected officials asking for some measure of predictability in terms of building scale.”

“The mechanical void loophole is a serious threat to how we regulate building bulk in our highest density districts and DCP was quick to recognize the problem and to develop a solution. This solution to the issue of mechanical voids doesn’t address all the zoning concerns we have, but it will make a difference on building designs currently in the pipeline and those to come in the future,” said George Janes, an independent planning consultant, who filed the challenge with the DOB and advised community groups on this matter.

City Councilmember Helen Rosenthal said her community had been watching developers tactics such as voids to create tall buildings and circumvent zoning regulations in order to maximize profits in a emailed letter to community members on Monday. “I strongly believe that any undermining of the Zoning Resolution in order to maximize profits requires immediate action,” she said.

Councilmember Ben Kallos said in an emailed statement that he has been fighting similar development for years and asked DCP to restrict mechanical voids back in 2017. “We’re saying no to empty buildings filled with voids simply to give the 1 percent better views while leaving the rest of us in their shadow. There is something wrong when developers would rather build empty spaces to prop up the wealthy rather than building the affordable housing that 99 percent of New Yorkers need,” he said.

* Correction: The original version of this article incorrectly reported that the borough presidents would review the amendment after the community boards. In fact, they will all review it at the same time.

2 thoughts on “Time to Avoid Some Voids? City Planning Thinks So.”