CityViews: Mr. Mayor, it is Not Progressive to Build Cages for Humans 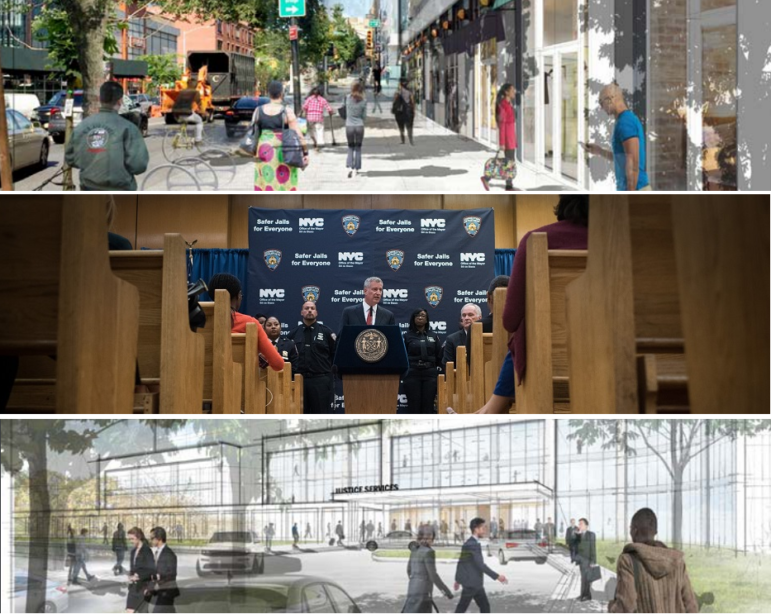 Top and bottom, the city’s renderings of what new jails in Brooklyn and Queens will look like. In the middle: the mayor at Rikers.

In last week’s state of the city address, Mayor Bill de Blasio positioned himself, and New York City, as national leaders in criminal justice reform. “Today, the population in our correctional system has dropped to less than 8,000 people for the first time in almost 40 years,” he said, adding, “The era of mass incarceration did not begin in New York City but it will end in New York City.”

Bold, yet puzzling, words, given that the mayor is working out of public view to build thousands of new jail cells for the 50,000 people that the city keeps in steel cages every year.

Right now, de Blasio’s plan to build new jails is overshadowed by his misleading public statements. The city’s largest jail, Rikers Island, has achieved national notoriety both for its inhumane conditions, and its excesses. Every day of the year approximately 8,000 people are held in New York City jails, not to be confused with their similarly noxious cousins, prisons. While people serve multi-year criminal sentences in prisons, jails are mostly used for confining people who are awaiting trial. After years of horrifying exposés on the conditions at Rikers Island, leaders faced mounting pressure to stanch the chaos.

In 2017, with much fanfare, de Blasio announced plans to close Rikers. At the same time, he quietly proposed a plan to replace the cells at Rikers with a series of more jails, concentrated in huge, new facilities in the densest parts of the city’s boroughs.

In other words: Bill de Blasio doesn’t want to end mass incarceration or close Rikers, he just wants to spread it around. His position is just a design quibble away from what outgoing Queens District Attorney Richard Brown articulated in The Daily News last week, when he argued that “best practice” in modern “penal design” dictates that caged humans ought to be arranged in horizontal structures, and not in skyscrapers.

Bill de Blasio and Richard Brown disagree about the details of how to stack caged humans, but they clearly agree on the fundamental notion that, over the course of a year, tens of thousands of our neighbors should be kept in the city’s cages.

By cramming all four sites into one land-use application, de Blasio will—if he gets his way—shortcut the city’s land use and environmental protection impact processes to build skyscraper jails in downtown Brooklyn and Chinatown, just blocks from where we live. Under his plan, the Brooklyn jail would swell upwards, from 815 cells to 1,500. Neighborhoods in Mott Haven and Kew Gardens will host similarly enormous jail expansions.

Speaking of progressive values, three of these four neighborhoods are represented by members of the New York City Council’s “Progressive” Caucus, and not one of those members has taken the position that our real goal should be putting dramatically fewer people in cages. Those progressives, Stephen Levin, Margaret Chin and Diana Ayala, have remained eerily quiet on the topic of moving thousands of caged humans to their districts. Instead, they signed onto the mayor’s rushed mass incarceration project cloaked as a real-estate development process. Council member Karen Koslowitz, whose Queens district is slated to host one of the jails, has gone as far as suggesting that the massive detention facility will be a boost to the local Queens economy.

This backroom approach to building giant new jails ignores fact that there are credible plans for closing Rikers, without requiring new jail construction. Ending pretrial detention, and its engine cash bail, would go a long way; 76 percent of the people held at Rikers are simply awaiting trial. Many of those pre-trial detainees are arrested after shoddy investigations that should never lead to formal charges; in the most infamous case, Kalief Browder, who was falsely accused of stealing a backpack, tragically took his own life after years in the Rikers system. Even hardened corrections experts estimate that a small fraction – fewer than 5 percent – of people miss court dates when we use alternatives to pre-trial detention.

In the meantime, scrapping the new jails plan makes fiscal, common, and human sense. The city says it will spend nearly $11 billion on the vertical jails. That kind of cash could go a long way towards repairing NYCHA or modernizing the MTA. If the city can find tens of billions of dollars to criminalize and isolate our most marginalized neighbors in cages, why can’t we figure out a way to invest in the improvements that our communities need to thrive?

The city needs to close the jails at Rikers Island. When we close Rikers, though, we cannot move the people kept in cages there to other parts of the city. Nothing sends a bigger signal that the city is cravenly committed to a system of mass incarceration than the construction of giant new jails in the city’s thriving neighborhoods, especially when the city’s leaders are touting historical reductions in crime. Rejecting the plan to build new jails is the only reasonable position for local progressives who want to remain on the just and moral side of criminal justice debates, here or on a larger stage.

For now, though, the nation’s faux progressive mayor is hanging his legacy on further embedding mass incarceration in the nation’s history, and into the city’s skyline.

Justin C. Cohen is a Brooklyn resident and chief operating officer of Wayfinder Foundation. Kei Williams is a Manhattan resident and a founder of the Black Lives Matter global network. Both are members of the No New Jails campaign.

2 thoughts on “CityViews: Mr. Mayor, it is Not Progressive to Build Cages for Humans”