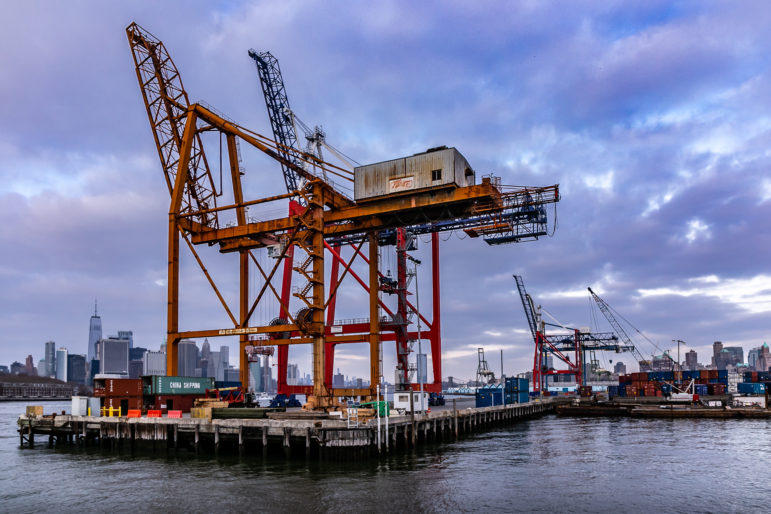 New York City officials pitching a new freight distribution and infrastructure plan have yet to address its environmental or economic downsides.

The $100 million plan, announced by Mayor Bill De Blasio in mid-July, is supposed to overhaul and modernize New York City’s freight distribution system by shifting away from trucks, which pollute city air and congest the streets and highways, toward maritime and rail options, and smaller, greener vehicles.

But experts say the plan could increase traffic and emissions near barge hubs and that the switch to smaller vehicles may not necessarily reduce emissions. Further questions surround the economic viability for suppliers and whether the shift from trucks to barges could pose economic challenges and significantly slow delivery speeds.

“The plan is a good idea, but it has its share of challenges. What we will have to see are the specifics. How is it working?” said Amit Mokashi, a supply chain logistics and maritime port expert at New Jersey City University.

According to an outline published by the New York Economic Development Corporation (NYCEDC), the plan could eliminate 40 million truck miles annually from the city.

But experts say it could also increase local truck traffic in areas where freight transfers will take place.

“A common feature of marine transportation is that you tend to have very localized effects where water meets land,” said James Kruse, a research scientist at the Texas A&M Transportation Institute and director of the institute’s Center for Ports & Waterways.

“You have vessels coming in, sitting, idling, doing work, while there are a lot of trucks coming in to drop stuff off and pick it up,” he said.

Local truck impacts are a concern

One neighborhood that could bear the consequences is Brooklyn’s Sunset Park, which is home to one of the city’s largest industrial waterfronts. As part of the overhaul, the city has already invested $115 million in Sunset Park’s South Brooklyn Marine Terminal, which, according to NYCEDC, should be reactivated and ready to receive cargo next year. The plan also calls for the upgrade of the 65th Street Rail Yard in the area, and a freight distribution hub at Sunset Park’s Brooklyn Army Terminal, where the bidding process for interested developers is underway.

Jeremy Laufer, district manager of the community board that represents Sunset Park, said that the city has been unresponsive to questions about how the plan’s implementation might affect local life, and to his requests for a traffic impact study.

“The initiative is great for the region, but not necessarily great for our community,” he said.

Ryan Chavez of UPROSE, a community-based Latino organization in Sunset Park that promotes sustainability in the area, is optimistic about the plan. Freight NYC is consistent with UPROSE’s mission to keep the industrial waterfront safe from commercial real estate interests, and it promises to bring 5,000 freight jobs to the city over the next 10 years, many of them to Sunset Park. But Chavez also has some concerns.

“We hear a lot of talk about how the freight distribution overhaul will reduce thousands of truck trips per year, but what does that mean for local impact? The local community deserves to know what those very specific community level impacts may look like,” he said. “This is a needle that needs to be thread in a way that on the one hand maintains economic job opportunities that working-class neighborhoods of color have relied on for a long time, and on the other hand is done in a way that reduces public health concerns that are serious.”

Carlos Menchaca, a New York City Council Member who represents Sunset Park, said that plans to improve the trucking industry should help to counter increased truck traffic in the area.

“We want to change the way that the trucks are coming in and out of our community,” he said.

“Part of that is to change the trucks themselves. What we want are smaller trucks that have less of an impact, and smaller vehicles that can deliver goods to neighborhood stores and residents.”

According to experts, smaller vehicles will not necessarily be more energy efficient.

“The primary costs of moving cargo are employee wages and fuel. For fuel purposes, a big vehicle tends to be more energy efficient on a per-person basis,” said Anne Goodchild, a civil and environmental engineer at the University of Washington.

“A diesel vehicle tends to have much poorer, more significant local emissions, so if the small vehicles are gasoline powered, that will make a positive difference for the local community,” said Goodchild. “But having many small vehicles is also less efficient in terms of the total number of miles that need to be traveled, which makes this a complex picture to figure out … It could play out differently depending on your priorities.”

When asked about this potential caveat, Menchaca said the city would create incentives for the use of greener vehicles that did not use diesel fuel.

According to NYC.gov, the city will offer rebates to encourage suppliers to move away from older, heavier diesel-fueled trucks and provide charging stations and compressed natural gas sites to encourage vehicles to switch to alternative energy.

“If you look at how just by shifting the type of trucks from diesel trucks to natural gas, or even potentially electric vehicles … that can have an impact on emissions drastically,” said Menchaca.

NYCEDC officials, who commented for this article on background, said that Sunset Park, an existing industrial enclave, already has heavy truck traffic and should not experience an increase from Freight NYC. Though they plan to evaluate individual Freight NYC projects on a case by case basis, they do not believe that the plan will require uniform land use review procedure (ULURP) review for already industrial areas like Sunset Park, particularly since last-mile delivery trips can eventually be handled by low or zero emissions electric vehicles.

The NYCEDC is still working with the city to secure funding for costly clean energy vehicles and clean transportation infrastructure, such as charging stations and alternative fueling stations. They are also seeking private sector partners who can help them set the market in motion. While Sunset Park’s South Brooklyn Marine Terminal may start receiving cargo next year, the transfer to clean energy could take much longer.

Kruse of Texas A&M said it will be difficult to convince suppliers to use smaller, greener vehicles because they are less powerful and much more expensive.

“You’re going to raise the cost of doing business. Are people really going to want to do that?” Kruse said.

Experts, including Kruse, pointed to America’s Marine Highway Program, a nationwide, Department of Transportation-sponsored effort to move freight transportation from highways to navigable waterways, as a good model to examine when thinking about potential challenges to Freight NYC (the NYC plan is designed to support the program).

Barges are more energy efficient than trucks. According to a report commissioned by the U.S. National Waterways Foundation, they can get more than four times the fuel mileage for each ton of cargo they transport. According to Kruse, one dry barge holds 70 truckloads of goods

But, one problem the America’s Marine Highway has faced is that barges are much slower than trucks—barge speeds rarely exceed 20 miles per hour (and may move much slower depending on currents and weather conditions) while trucks average between 50 and 60 miles per hour—and require larger volumes of inventory to be efficient.

“This doesn’t work for things that are high value that you don’t want tied up for long periods of time,” Kruse said.

The Red Hook Container Terminal (RHCT), the only barge terminal currently located in Brooklyn, was recently designated as the operator of the South Brooklyn Marine Terminal and is part of America’s Marine Highway. Mike Stamatis, its president and CEO, said that he has had no issues in convincing suppliers to ship goods by barge instead of truck, but his clients are mostly shipping between continents. He thinks the switch from truck to barge would be beneficial for local suppliers, too.

“Our regional bridges and roads are as congested, stressed, and tired as any time in recent memory and suppliers are in need of alternative means to reach customers,” he wrote over email. “Furthermore, we are all aware of rising costs of fossil fuels and increased regulation limiting or taxing use of such. Barge freight does not face these challenges. Rising tolls and driver rules also favor barging freight to the consumer over trucking.”

Another challenge faced by the marine highway initiative is the Jones Act, a U.S. maritime commerce law that requires goods moved by water to be transported on ships built in the U.S. and operated by U.S. citizens or permanent residents.

Kruse said the law results in higher equipment and transportation costs for goods traveling by barge.

According to Stamatis, New York has several Jones Act tug and barge companies that will have to compete to handle the new service demand. The competition “will help control market costs,” he said.

The most economically feasible options for barge travel are large, non-perishable goods, such as construction supplies, that can fill a barge to capacity.

According to officials from the NYCEDC, the city is examining the possibility of shipping goods such as less perishable food, construction materials, toys, and clothing.

Lenny Newman, who works sales for the company’s Jamaica, New York branch, said his company would never consider distributing their construction materials, which travel from Long Island to New York City, by barge.

“This adds a ridiculous extra step,” he said. “There’s too many places on Long Island that cannot wait for a barge to be loaded and unloaded.”

The New York Construction Materials Association is a trade organization that represents suppliers of road building materials—asphalt, concrete, and aggregates such as sand and gravel. According to Dave Hamlin, the CEO, its members already ship the bulk of their materials by barge.

Getting these materials off the barges and to local buyers, however, would be difficult to accomplish using vehicles not powered by diesel fuel.

“They are very bulky, very heavy, and you need a great deal of power to move them around,” Hamling said.