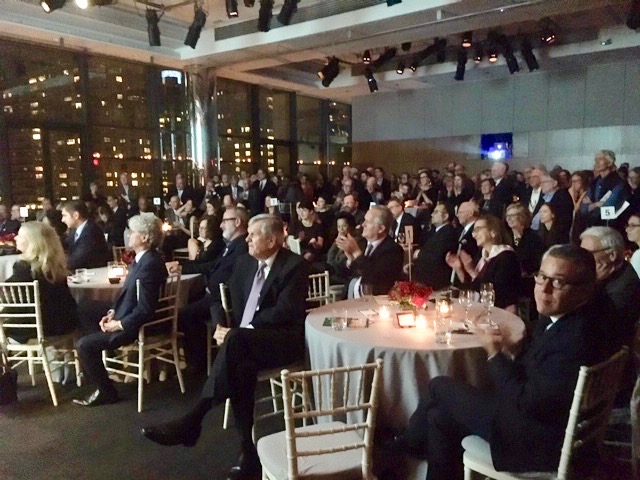 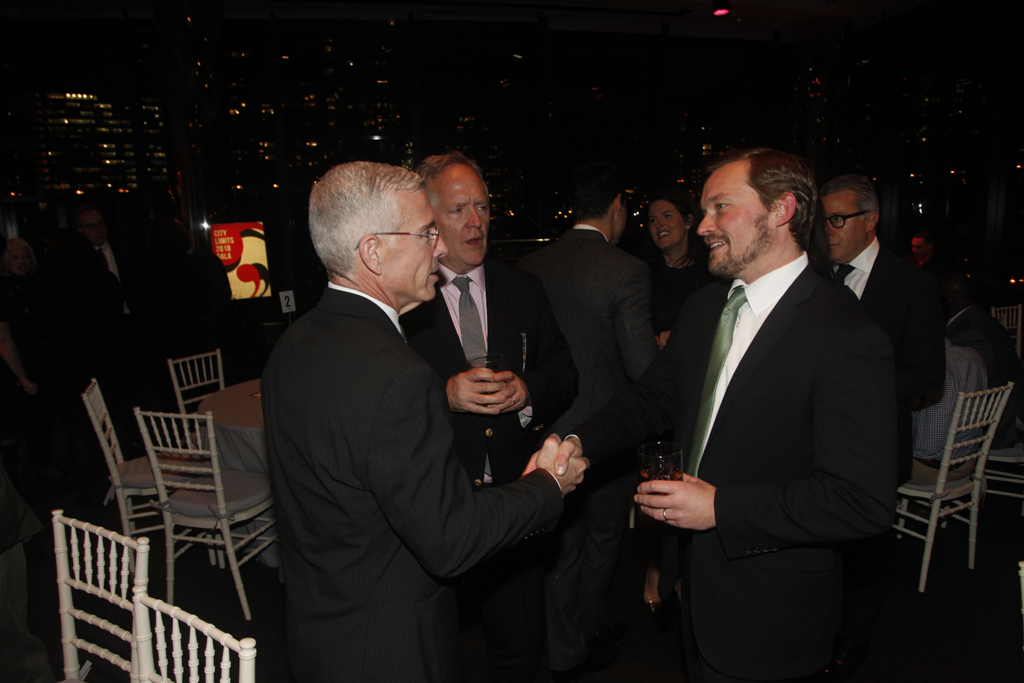 Photo by Photo by Larry Racioppo. 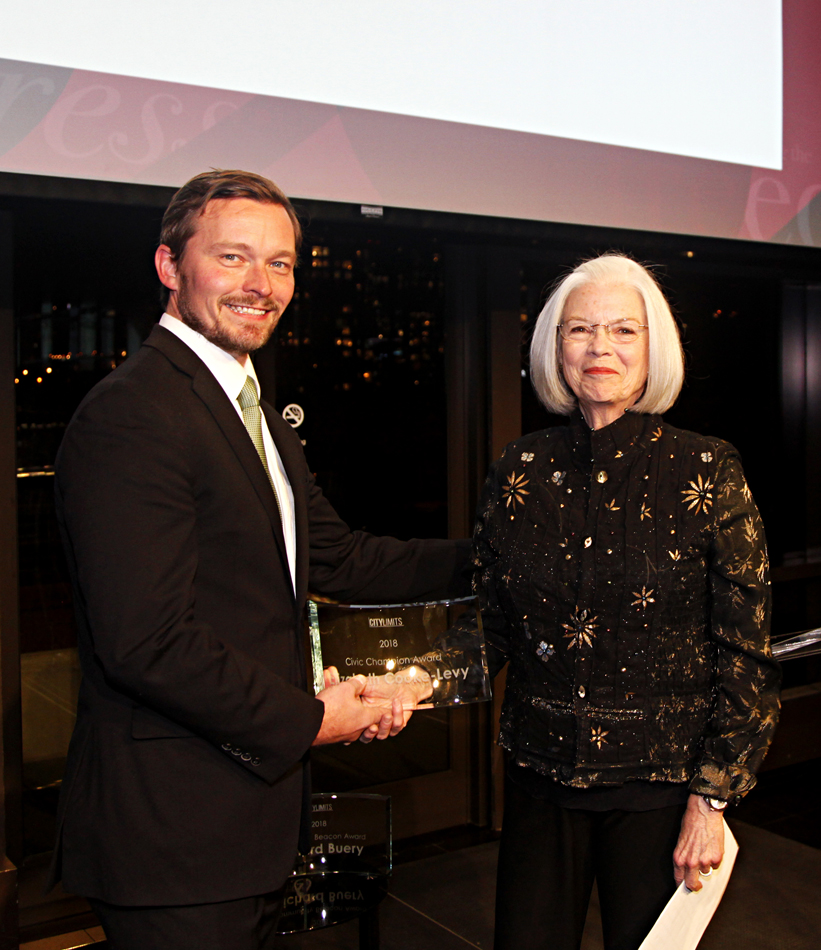 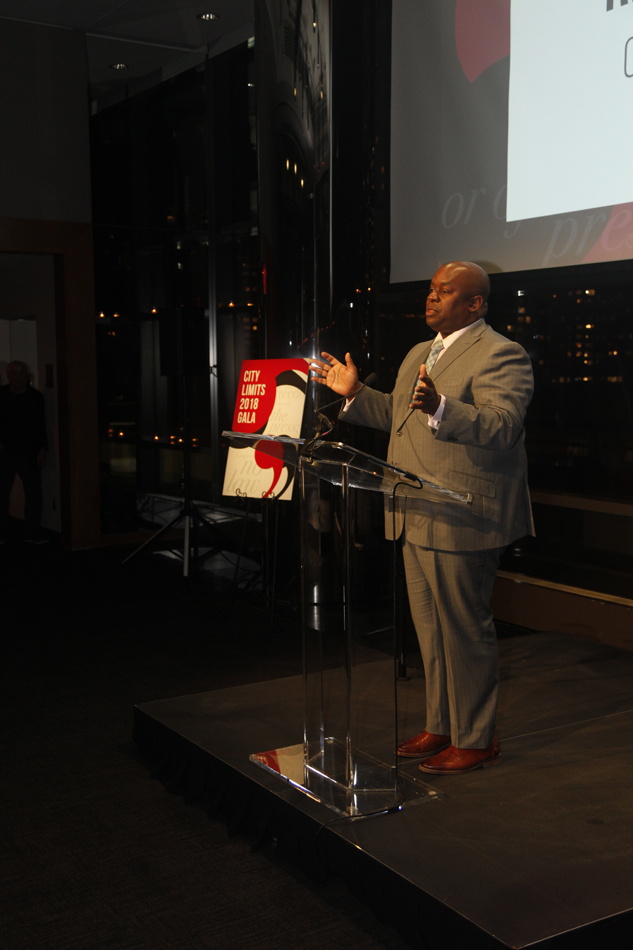 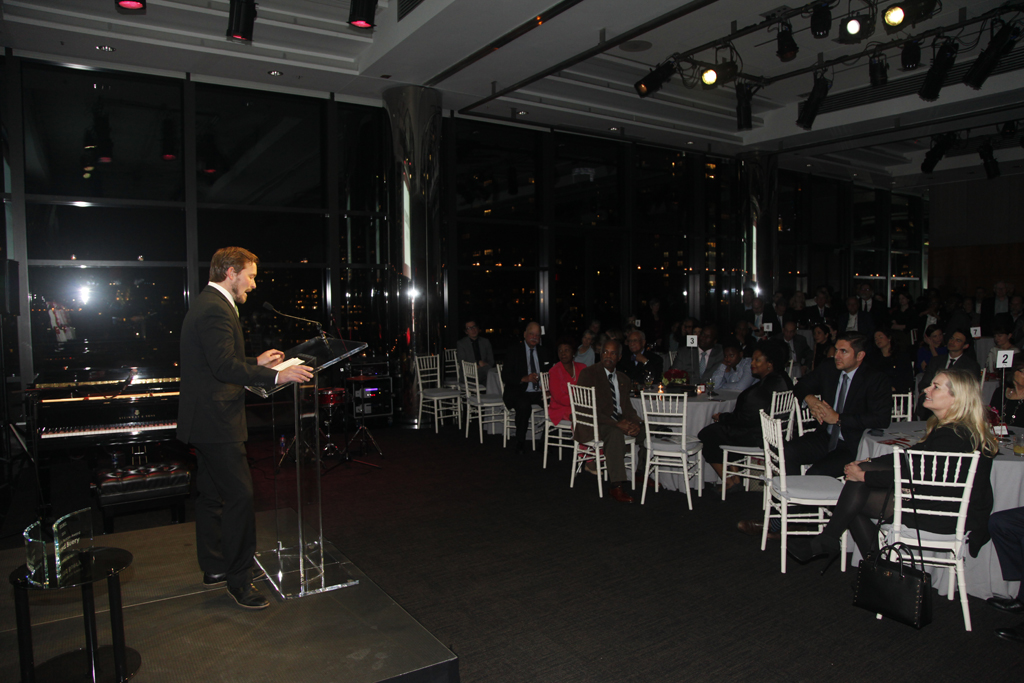 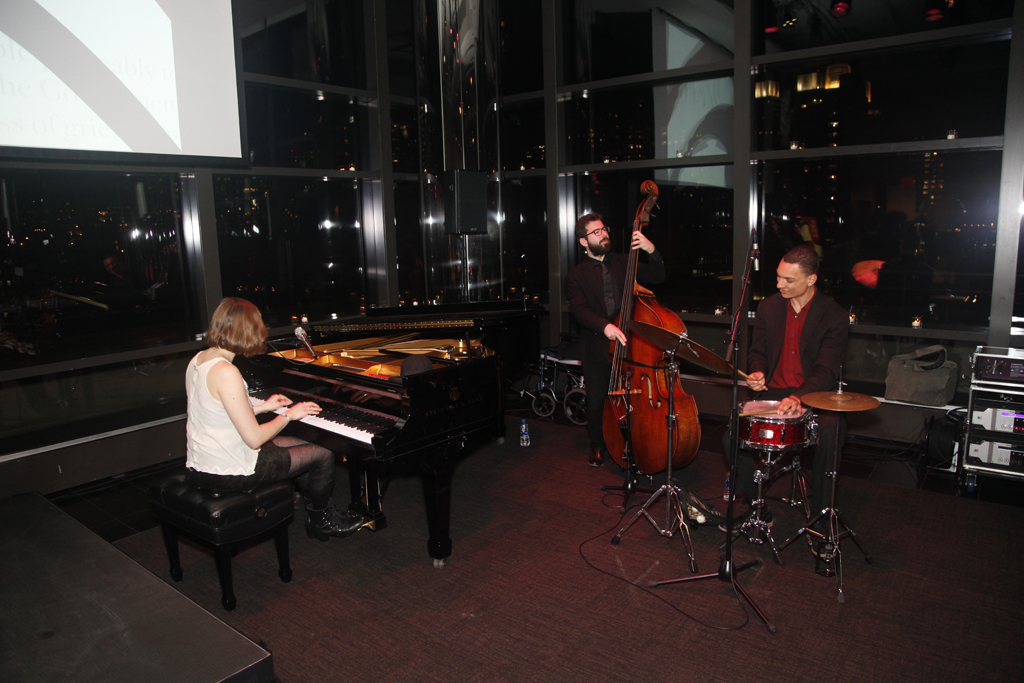 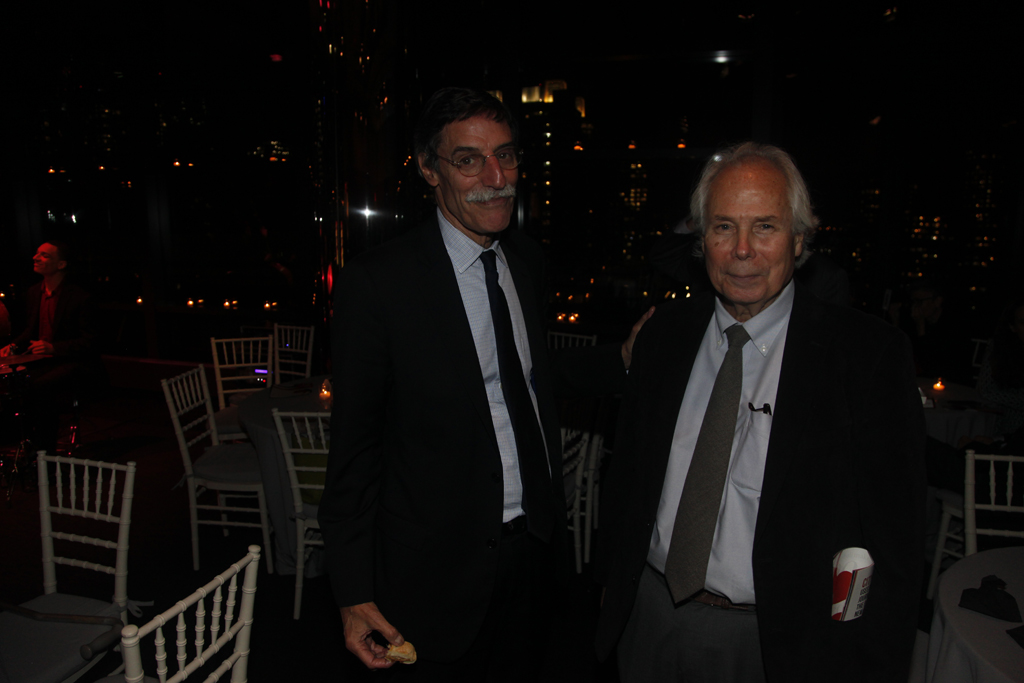 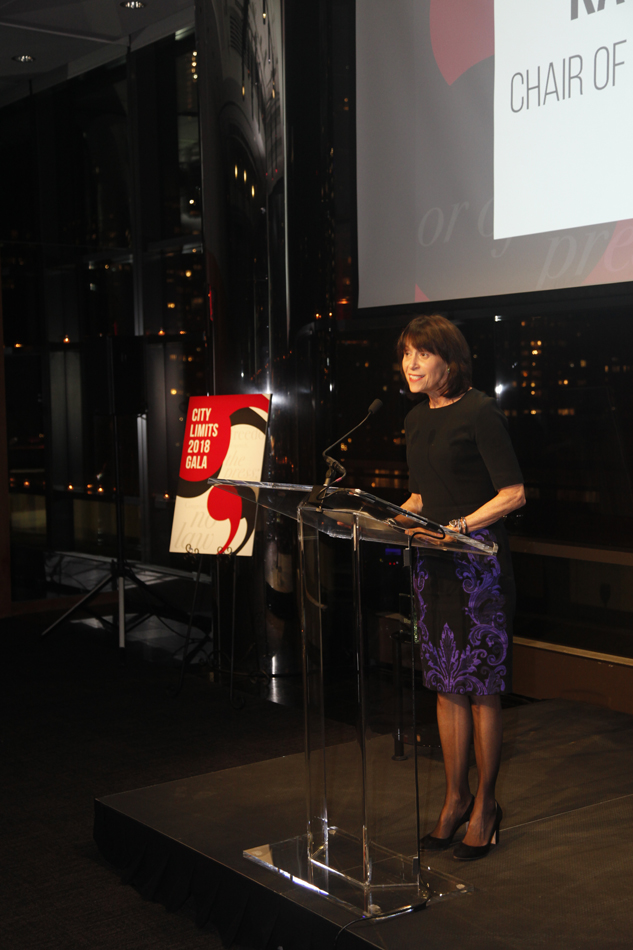 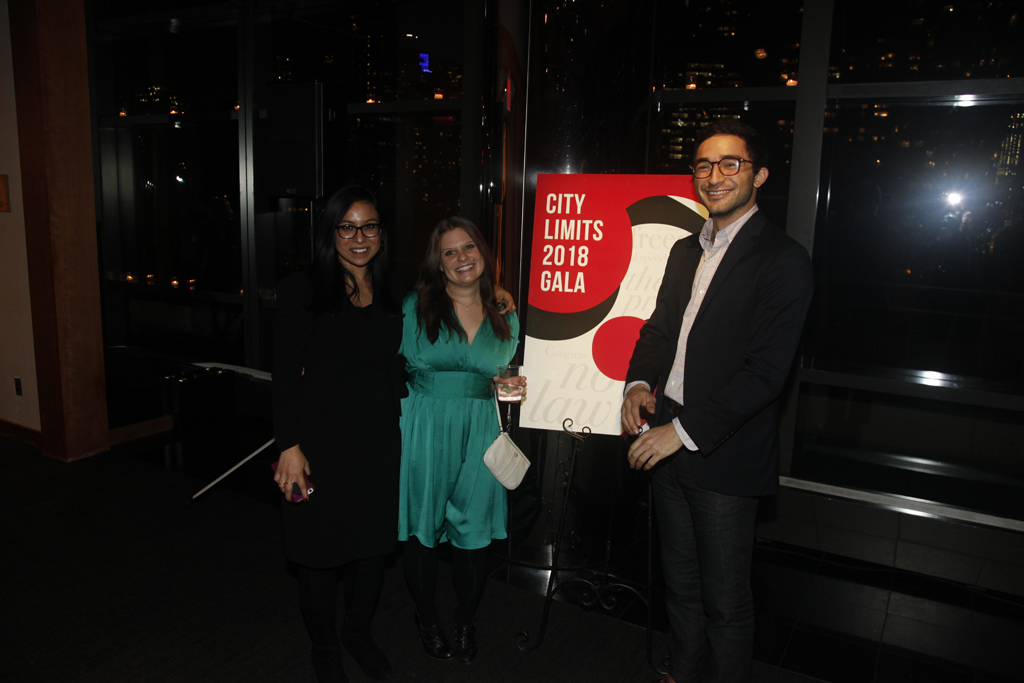 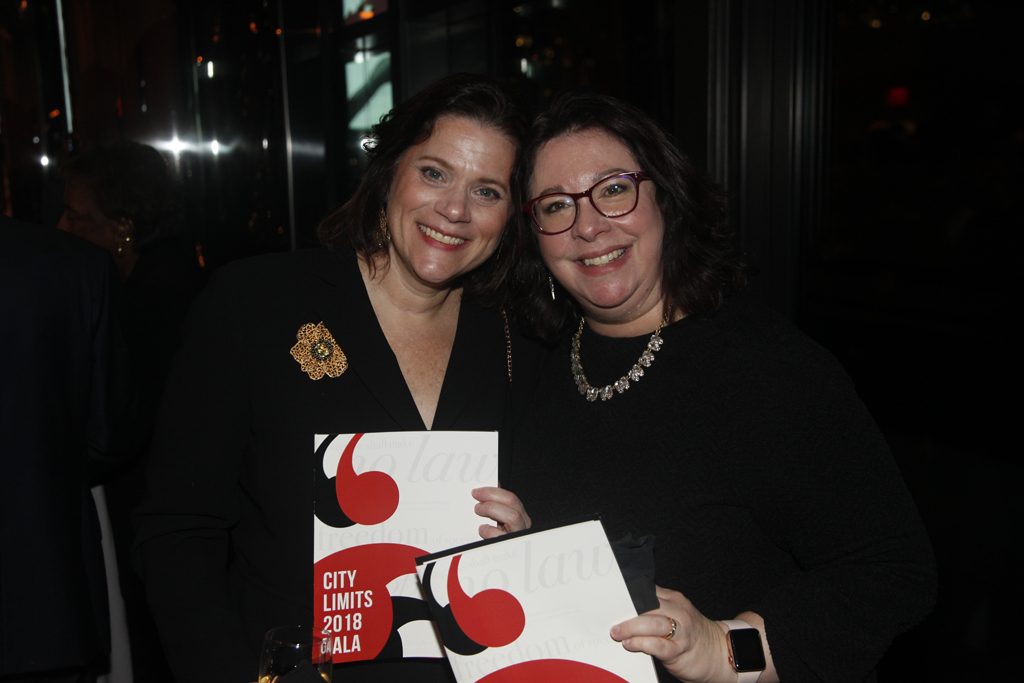 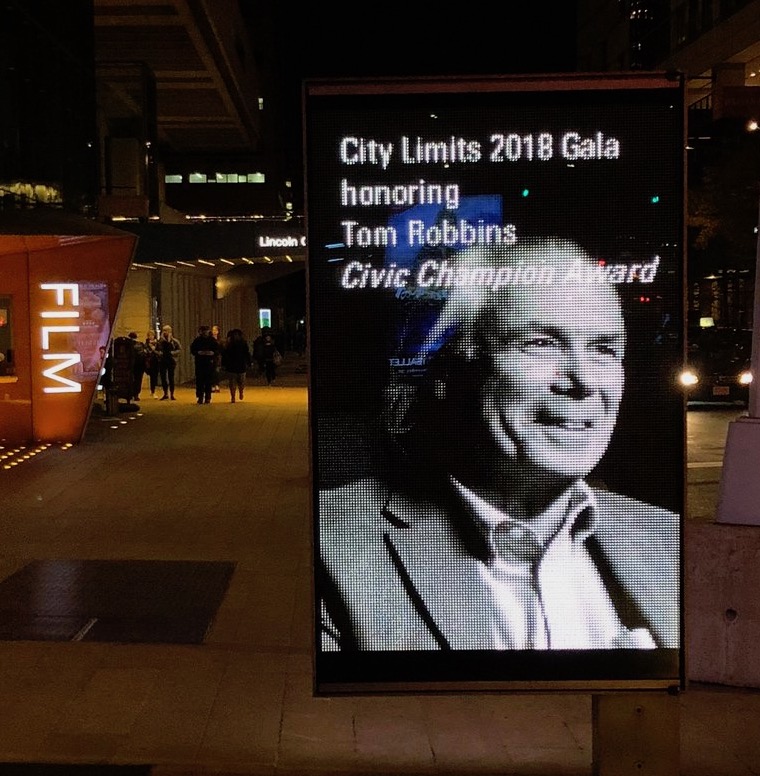 On November 8, City Limits supporters gathered at the Stanley M. Kaplan Penthouse at Lincoln Center for our 2018 gala honoring three New Yorkers whose work has improved the city and whose values mirror the ones City Limits has striven to uphold over its 42 years of reporting. 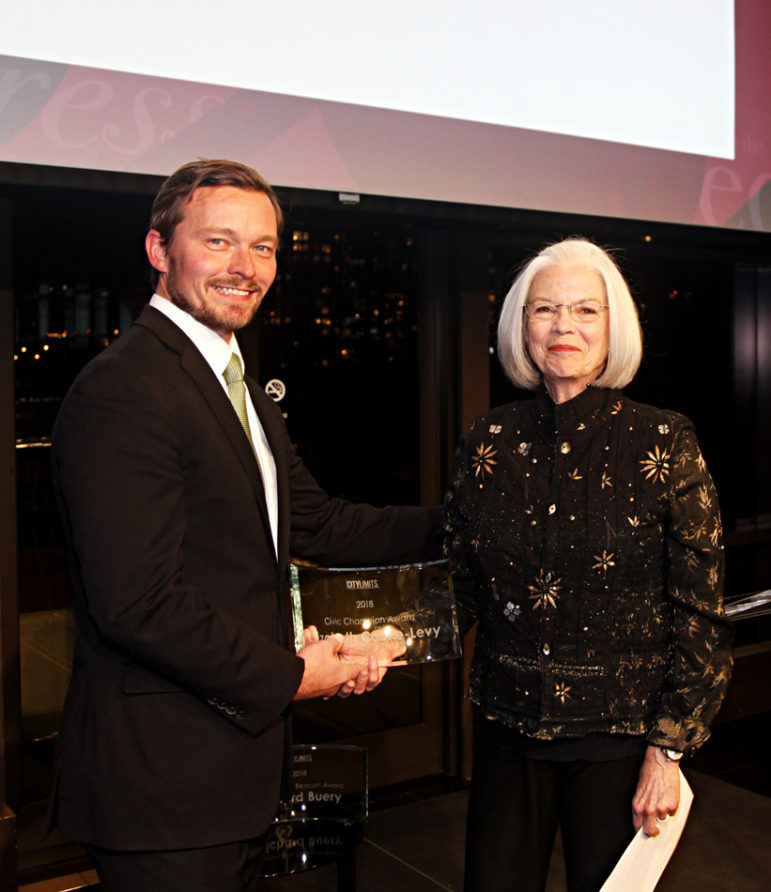 There are 3 people here tonight that I cannot fail to acknowledge.

Mayor David Dinkins: About 50 years ago as a college intern working at the New York State Assembly, I sat at a desk only yards away from David Dinkins and his good friend Charlie Rangel. Mr. Mayor you were then, and have remained to this day, a treasure of New York, as a superb public servant and as the embodiment of decency, civility and kindness.

David Jones: As the CEO of the Community Service Society David has advocated on behalf of poor people for much of his adult life. The latest of a long string of his successes has been to get the MTA to provide discount Metro Cards for our city’s most needy. Tonight, I wish to especially note David’s generosity to City Limits. In recent years David and CSS helped support City Limits through a smooth transition to organizational and financial independence. To this day, he is a highly valued trustee and City Limits loyalist and we are grateful to him.

Julie Sandorf: Julie is the President of the Revson Foundation. No civic leader has done more to call attention to the plight of local journalism and devise ways to revive it. The Revson Foundation’s investment in City Limits has been vital to broadening and deepening our base of support. Julie, thank you for your leadership.

I join my fellow City Limits trustees in offering warm thanks to all our supporters who are here with us tonight and to donors who could not be. Your generosity makes excellent journalism possible—about subjects, causes and citizens that are often neglected in the mainstream media.

I also want to publicly thank my husband Reynold, who enthusiastically and cheerfully worked to make this evening’s event a success, (many of you heard from him more than once) and who has supported my many non-profit activities.

New York City is a glorious place! There is nowhere else that I would rather live and work.

Many New Yorkers are justifiably proud of the tolerance, trust and interaction we experience daily with people of different classes, cultures and beliefs.

We enjoy a pluralism and civic solidarity that cannot be taken for granted.

Most of our civic leaders, public servants, agencies and organizations aspire to provide justice and fairness for all.

But we fall short.

There is a theme to my career and the institutions that I have been privileged to be associated with.

It is to help all New Yorkers experience cultural and educational programs, parks and social services and benefit from New York City’s great public facilities and institutions.

I support City Limits because its reporting helps us to confront the disparities between our vision and the harsh realities experienced by many who live and work here. Disparities in our courts and jails. In our schools. In housing. In law enforcement and in the delivery of vital health and social services.

City Limits produces reliable, factual coverage of these issues with old-fashioned, roll up your sleeves reporting.

Its staff reports from areas of the city rarely visited by other journalists and listens to voices who would otherwise be unheard.

I hope you will all read City Limits excellent work that is published by Jarrett Murphy and his colleagues.

Their journalism wins professional awards and fully merits your support.

What they write about truly matters.

Thank you all for joining us this evening. This gathering includes friends and colleagues whom I worked with in many efforts over many decades. I am truly moved by your presence, happy to see you and grateful for your support.

Thank you also to City Limits trustees and staff for recognizing my work at this gala. I am delighted to be honored along with Tom Robbins and Richard Buery. 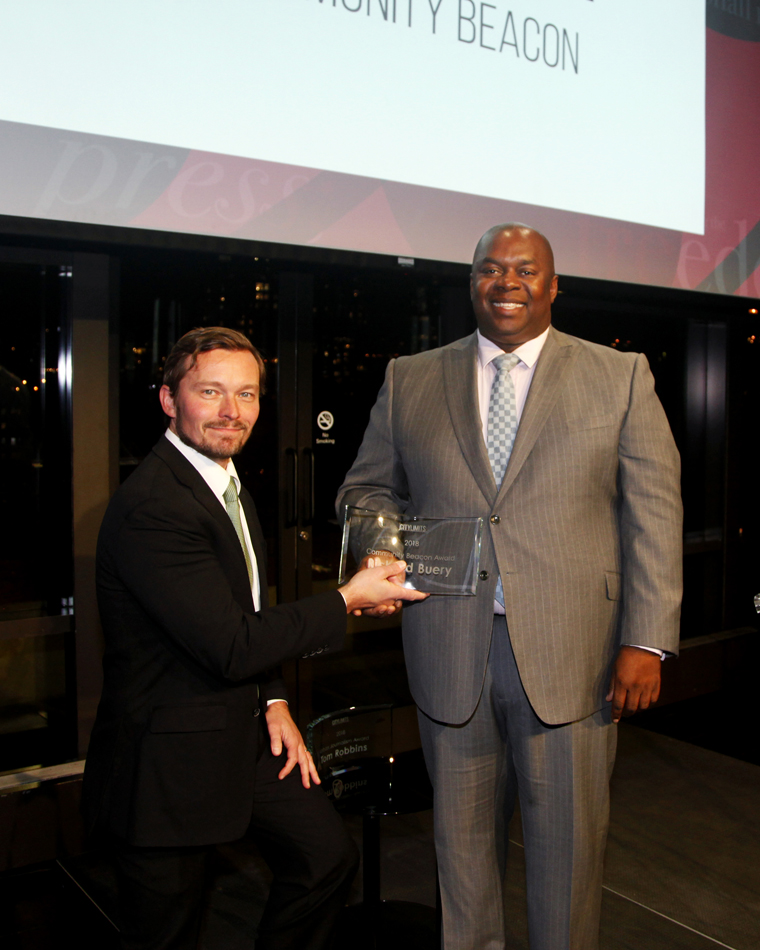 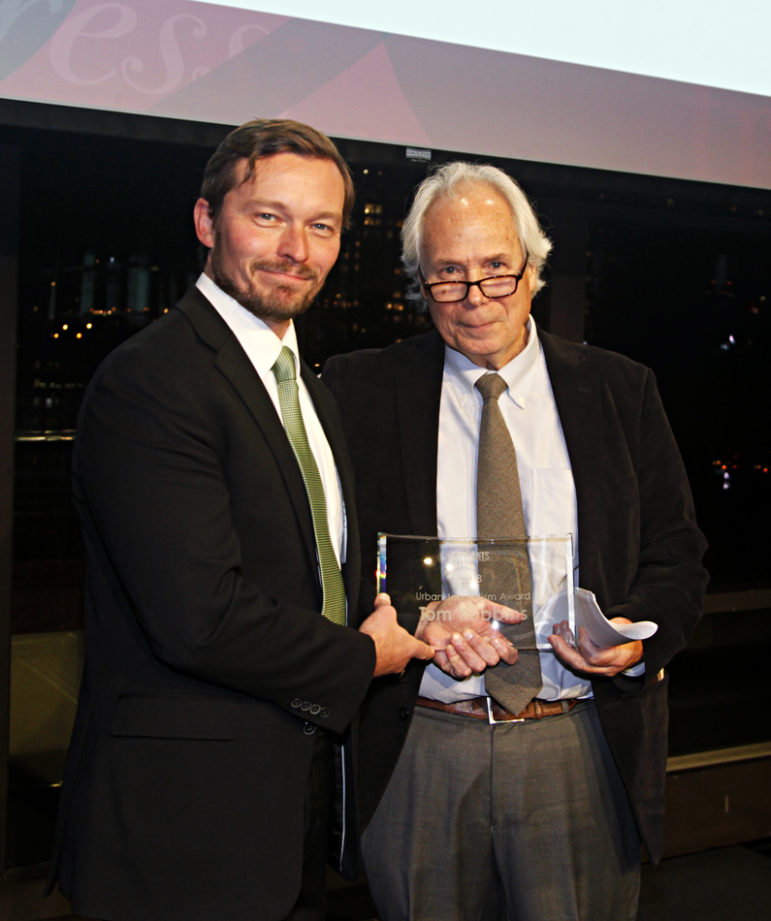 When I worked at City Limits in the early 1980s it was the best job I ever had, even though in that pre-digital era it was pretty labor intensive.

I’ve got a few quick takeaways from a look back at those now yellowing copies of the old paper version of City Limits from those years.

One is this: Writing for City Limits allowed me to be a witness to the battles everyday New Yorkers were waging in neighborhoods throughout the city. As I tell students at our school, what makes reporting the greatest job in the world is that you get to talk to people and hear their stories. And there were no better stories to be recorded than those told by the folks who were at work in the trenches back then trying to do what government had refused to do – to stop abandonment, to rescue buildings from lousy landlords, to push banks and politicians to reinvest, to create new affordable homes.

Also, being there changes you. It informs how you see the world. Icicles on a radiator in an East Flatbush apartment where kids are huddled under blankets. (I remember this one clearly because my pal Marc Jahr took a photo of it). Slick rat holes in a tenement on Norfolk Street where the landlord is trying to evict everyone. Roofs caved in by fires purposely set to empty a huge complex in Boro Park. A millionaire politician preening at the old Board of Estimate that low income housing only breeds crime. I’ve been out of City Limits for more than 30 years but those images stay with me, and shape how I see the world I write about.

We told those stories only episodically – that’s the nature of journalism.

But the bigger story from that time – and this is another takeaway – remains to be told: How New York City was really saved from what’s now considered the bad old days. Somehow the prevailing wisdom among those who claim to know what turned New York around in that era is that it was largely the work of a few farsighted politicians and financial leaders. That ultimately it took a mayor who promised to crack down wherever there were broken windows. That kind of talk always makes me grind my teeth. Because those of us who watched it happen know that neighborhood groups were the only ones fixing broken windows decades before that mayor took office. And they had to do it largely on their own

And here’s another takeaway: So many of those neighborhood leaders who led that fight were women. I marvel at some of the people we wrote about back then, people like Margaret O’Neil and Marie Runyon in Harlem, Anne Devenney and Jenny Brooks in the Bronx, Fran Goldin and Lisa Kaplan and Amparo Tirado on the Lower East Side, Sondra Thomas, Leah Schneider on the West Side, Fran Justa, Rebecca Reich and Betty Terrell in Brooklyn, Bonnie Brower. It’s a really long list. These women were tigers. I don’t mean to slight the men. There were plenty of them. People like Brian Sullivan and Harry De Rienzo who are here tonight and are still plugging away. But more often than not the leadership and inspiration for these community groups came from women who simply understood the need to defend their neighborhoods and got to work because no one else was going to do it.

I thought about them on Tuesday night watching the fabulous lineup of women newly elected to Congress and the women here in New York who will lead the next state senate. That new majority is led by a cohort of truly admirable elected officials —Andrea Stewart Cousins, our own Liz Krueger and Velmanette Montgomery and now Alessandra Biaggi. These women are going to reshape the rules and make this state and this city fairer and more inclusive. It’s the last we’ll hear of three men in a room.
Another takeaway when I look at those old issues is to remember how we often struggled to pay the bills. These days there is much focus on creating nonprofit journalism. Places like WNYC, Pro Publica and the Marshall Project, where I’ve been writing the last couple of years, and a new hopeful local news effort underway called The City, have been organized as nonprofits because the advertising base to support journalism just isn’t there anymore. And that’s left a huge hole in how our city is covered. Well City Limits was way ahead of that curve. We were a nonprofit magazine with a board made up of nonprofit organizations, ANHD, Pratt Center, UHAB. And in addition to our loyal subscribers, we were supported by a small group of foundations like the Fund for the City of New York and New York Community Trust– again, come to think of it, those foundation officers were mostly women: Nancy Castleman, Anita Nager, Lori Slutsky, Pat Jenny. All of them understood that telling the story of what was going on in the neighborhoods was crucial. Yet not once did those institutional supporters ever ask us to pull our punches, even when we threw them at the government officials and politicians who were approving their own funding pipelines.

And along those lines, one final takeaway: At City Limits we knew a greedy son of a bitch when we saw one, and we did our best to spot light those who were driving people out of their homes or dipping into the public trough. And among the greediest SOBs we covered back then was a rich kid from Queens who was insisting he needed big city tax abatements to build his towers for the wealthy. And I’m proud to say that we were the lone reporters on the scene at the very first demonstration that was held against Donald Trump by a coalition of tenant and neighborhood leaders. With notebook in hand and a City Limits photographer snapping away, I got to watch as this crowd took a right turn off Fifth Avenue, surged into the lobby of Trump Tower and charged up that same escalator that Donald Trump rode down in 2015 to announce his loathsome campaign. And I watched as they seized the balcony, draped their big banner over the railing— Affordable Housing Now it read—and sent up a chant of Housing for People Not for Profit that echoed off the ceiling of Trump’s multimillion dollar atrium.

And you can look it up – there’s the photo of Galen Kirkland from West Harlem Community Organization, hands on hips, elbows akimbo, surrounded by a sea of demonstrators, going nose to nose with the Trump security guards who are vainly trying to throw them out, Galen telling The Donald’s cops that – thanks to the deal Trump cut to get his tax break they were in a public space and they were damn well going to stay as long as they wanted.

Now in 2018 that’s something to be able to say that you witnessed and reported on, and one more reason why it was my honor to work at City Limits and an honor to be honored by it tonight. 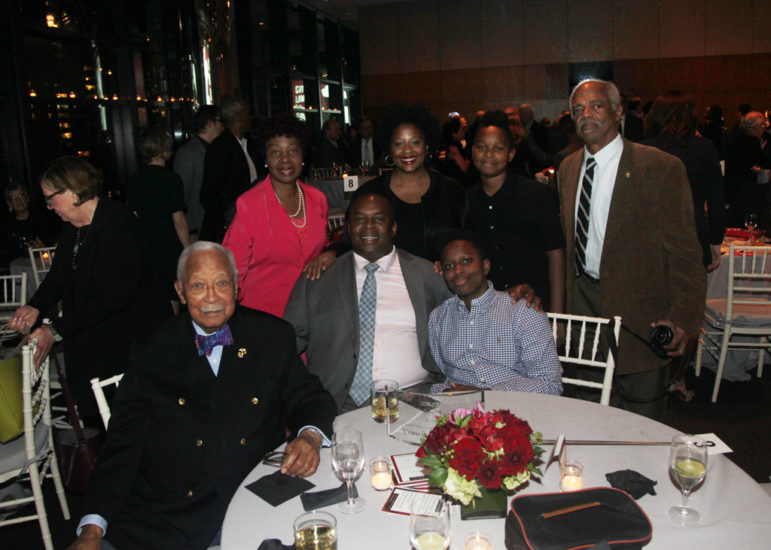