CityViews: Community Board Term Limits Would Weaken Checks and Balances 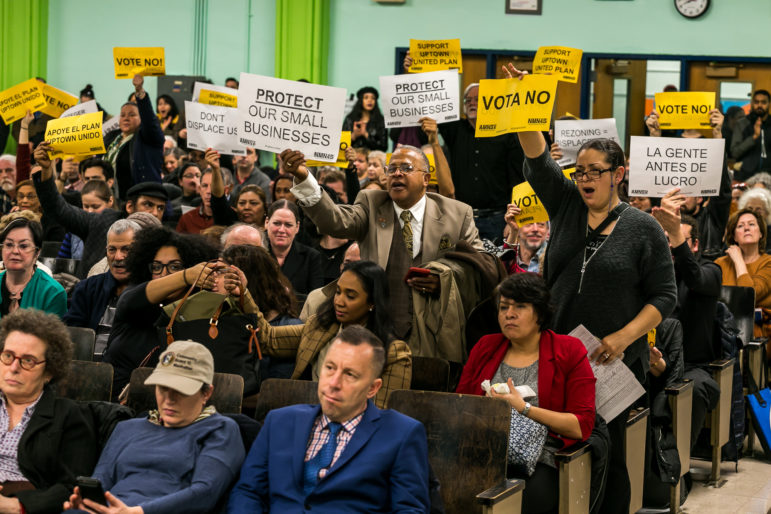 Attendees at a Manhattan Community Board 12 hearing earlier this year.

* * * *
On Election Day, New York City residents will have a chance to vote on three ballot measures. City Limits welcomes op-eds from anyone with a position on one or all of them. Let us know if you want to weigh in. Click here for an opposing viewpoint on Question 3.
* * * *

As someone in my second non-consecutive stint serving on a community board, I have to own up.

The primary reason New York City community boards have any substantive usefulness is that they frequently serve as inconvenient flies in the land use ointment.

But, when you have an administration so intent upon laying facts in the ground, the last thing they want is for anyone to have the ability to slow the process down and subject proposals to scrutiny.

As a former agency counsel and Brooklyn coordinator at the Mayor’s Community Assistance Unit, I’ve been watching Community Boards and attending their meetings for over two decades and I’ve noticed the most effective ones are those which have members who’ve acquired expertise and institutional memory.

And the proposed charter amendment to impose community board term limits is an effort to eliminate the administrative roadblock called “scrutiny” in the name of “Good Government.”

It is an effort to impose opaque government in the name of transparency.

As the civil servants in “Yes Minister” were wont to admit in private: “Rotation is castration.”

I’d be the first to agree that boards with too many longtime members can become stagnant and unrepresentative of the community, but when they become so, the solution is for the Councilmembers and borough presidents who appoint them to do their jobs and replace members who’ve lost their vitality.

But this is government, not kindergarten and I would argue to the contrary that the highest and best purposes are served when the interests of communities are most effectively safeguarded.

Now, if, if supporters of community board term limits like Councilman Brad Lander and Borough President Eric Adams were sincere about their reasons for doing this, they would not need a charter amendment—they would just implement them on their own, in the same manner in which they’ve implemented “participatory budgeting.”

But I cannot help believing that the real idea is to impose a policy across the city that greases the wheels for the sort of “progressive development” favored by the mayor.

By “progressive development,” I mean the aggressive efforts by the mayor and his allies to use every last piece of land in the city for market-rate high-rise luxury development with some segment dedicated to “affordable” housing.

I don’t invariably oppose such plans; more often than not I favor them, but I think they should be subjected to the same scrutiny as any other proposed zoning variance and zoning change.

The reason I think term limits will lead to easier passage of such plans, with less scrutiny, is that many of the most affected boards tend to have long time experienced members with histories and knowledge of the land use process, both from a nuts and bolts perspective and from an historical perspective in their areas. This has led to both aggressive questioning and aggressive negotiation.

Though Councilmembers and borough presidents have some ability to get rid of troublesome members, this involves subjecting themselves to unwanted controversy and scrutiny. With term limits, such members are disposed far more easily, allowing them to be replaced with the more pliable.

The comparison of term limited community board members to term-limited City Councilmembers is specious. The Council has full time professional staff. Despite lip service in this direction from the city, the city will never provide the Boards with the tools they need to fight the combined forces of the city and developer lawyers and lobbyists—in fact, the trend has been to cut what little resources the boards have even further and to make them even more dependent on the borough presidents and mayoral agencies.

The one line of defense the Boards have is members with years and sometimes decades of expertise, negotiating experience and institutional memory—and now the city proposes to take that away in the name of opening up the process. This is opening up the process in the manner of slashing one’s own wrists.

Howard Graubard, an attorney, Brooklyn resident and former aide to a state Senate minority leader, blogged about local, state and national politics at Ben Smith’s “Room 8” (and elsewhere) in 2006-’16 under the pseudonym “Gatemouth.” (No one was fooled.)

One thought on “CityViews: Community Board Term Limits Would Weaken Checks and Balances”