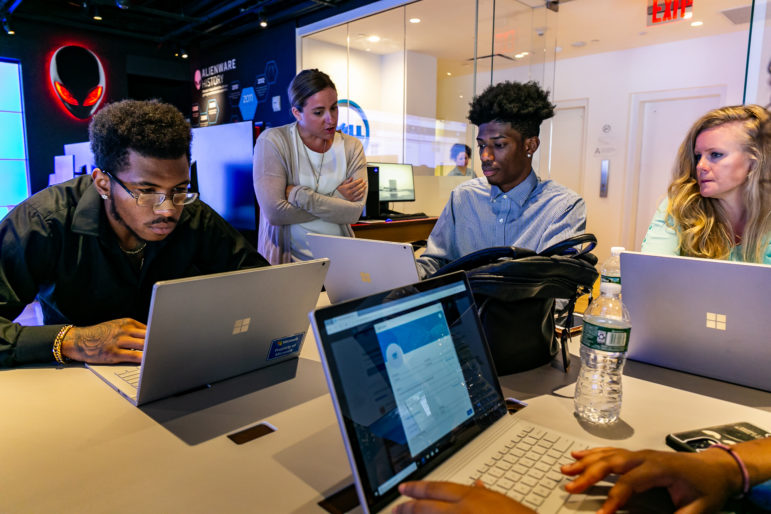 The Department of Youth and Community Development partnered on June 25 with Microsoft to host a professional networking workshop for participants in the Young Adult Internship Program Plus, one of the Office of Economic Opportunity’s programs run by Opportunities for a Better Tomorrow. Seen at the Microsoft Store NYC Flagship on 5th Avenue are, from left to right, YAIP participant Michael Jamison, OBT staff Kelsey Reenstra, YAIP participant Marcel Crawford and OBT staff Sara Vonhold.

In his run for mayor in 2013, Bill de Blasio campaigned on creating a more economically equal city. His OneNYC plan, released in 2015, committed to lifting 800,000 New Yorkers out of poverty or near poverty in 10 years. He was the second mayor in a row to make reducing poverty a signature goal: Mayor Mike Bloomberg made a similarly bold pledge at the start of his second term in 2006.

Prior to assuming office, however, de Blasio questioned the effectiveness of Bloomberg’s approach to fighting poverty, embodied in the Center for Economic Opportunity, or CEO. As reported in 2008 by City Limits, de Blasio found expectations low, pacing slow, and results limited for CEO’s work.

Under de Blasio, NYC Opportunity continues its poverty research, as seen in its annual poverty measure, has expanded its evaluation responsibilities to include programs not funded by the office, and continues to invest in what it has identified as potential solutions to New York’s poverty challenges.

Those leading NYC Opportunity believe the Office of Operations is a good fit for this work. “Having a lab like ours in the Mayor’s office that crosses multiple city agencies, keeps the mission focused on poverty so we can elevate it and make it a priority,” said Carson Hicks, the program’s deputy executive director.

Joel Berg, a veteran advocate for economic justice, says the office plays a different role under the current mayor. “They’re doing important work but it’s not necessarily the center of antipoverty policy in the city. I think that’s returned to the deputy mayor for health and human services and the combined Department of Social Services and Homeless Services.”

And that, says Berg, is a good thing. “It’s no longer sort of this odd think-tank in charge of figuring out what the city should be doing on poverty.”

An emphasis on experimentation

Bloomberg formed the CEO out of the belief that new thinking and strict evaluation could help decrease the city’s near stagnant poverty rate.

“Across the country, we invest heavily in safety net services, yet we have not seen a drop in poverty in recent years,” said then Deputy Mayor of Health and Human Services Linda Gibbs in 2007, one year after CEO’s creation. “Our efforts have stalled, and here in New York City’s poorest neighborhoods, we are looking for new ways to drive down the number of people living in poverty.”

Trial-and-error was viewed as a necessary process in fixing the problem, the thought being that even failed programs could offer the city guidance.

Between 2006 and 2013, 17 of its programs were discontinued for underperformance, the most well-known of these being Opportunity NYC, a conditional cash transfer program based on models used successfully in Latin America but which proved ineffective in the city. That program was controversial because it appeared founded on a belief that poverty was largely driven by lifestyle choices of the poor.

Other CEO programs were faulted for targeting very small populations, and the overall effort was criticized for devoting little attention to the safety-net programs, compliance with which can be a dominant part of poor people’s lives.

One CEO undertaking that won wide praise was its development of a new measure of poverty.

The NYCgov poverty measure, based on National Academy of Sciences (NAS) recommendations, differs from the U.S. official poverty measure in that it looks at a fuller picture of a family’s resources and expenses.

And while the U.S official poverty threshold is based on a minimal food budget, the NYCgov threshold considers other nondiscretionary expenses a family will incur, such as childcare and commuting costs, payroll taxes, and medical expenses.

The effects of these considerations are a higher poverty threshold, $32,402 in 2016 for a two-adult, two-child family, compared with the U.S. official level, which stood at $24,339 in 2016. In 2011, three years after the city released its poverty measure, the US Census Bureau followed suit, creating the Supplemental Poverty Measure, also based on NAS recommendations.

At the time of CEO’s creation, New York City’s poverty rate, using the New York City measure, was 20 percent. In 2013, at the end of Bloomberg’s final term, the city-calculated poverty rate was 20.7 percent. However, the 0.7 percent increase was smaller than the poverty rate increase during the same period for the country as a whole (2.2 percentage points from 2006 to 2013).

This April 13, NYC Opportunity released its annual poverty measure. The report, which is mandated by a 2013 revision to the City Charter, shows that the poverty rate in New York City fell to 19.5 percent in 2016 (the most recent data available) and the near poverty rate to 43.5 percent, both statistically significant decreases since de Blasio came into office.

Progress in poverty reduction has been fueled in part by improvements to the national economy: The most recent jobs report showed a net increase of 223,000 jobs from a range of industries for May and an unemployment rate of 3.8 percent. Statewide initiatives might also have helped, such as the increasing minimum wage.

NYC Opportunity continues to manage and develop initiatives to help reduce the city’s poverty and near poverty rates, but it’s hard to say whether these have impacted citywide statistics.

NYC Opportunity has 30 programs in its current portfolio, about twenty of which are holdovers from the previous administration.

Its education programs include the nationally acclaimed CUNY ASAP program, which provides support to students completing Associate Degree programs. This program has nearly doubled three-year graduation rates for its students, and a 2013 Teacher’s College analysis shows that for every $1 invested, $3.50 is returned in the form of higher employment rates and less need for public services.

Building on the success of CUNY ASAP, the city launched the ACE program at CUNY’s John Jay College of Criminal Justice in 2015 to see if similar results could be had for those completing a Bachelor Degree program. Last month, NYC Opportunity announced that it is increasing support for the program, which will grow to serve 894 students and cost NYC Opportunity $9.5 million in total support.

NYC Opportunity currently has eight programs aimed at increasing job readiness for low-income New Yorkers. However, despite employment-focused budgets totaling over $32 million for the 2016 fiscal year, only slightly more than 9,000 placements were made that year (most recent performance data). In his 2017 State of the City address, de Blasio committed to creating 100,000 new, good-paying jobs (annual salaries of $50,000 or more) over the next ten years. The education, training, and job matching needed to connect New Yorkers to these new roles will be done through the city’s Career Pathways initiative, which receives support from NYC Opportunity but is a separate organization.

Four justice related programs are led by NYC Opportunity: AIM (Advocate, Intervene & Mentor), which mentors juveniles who are on probation; Food Handlers Certification, which provides food-handler and first aid certification for those in Department of Corrections facilities, and Justice Community and NYC Justice Corps, which both provide career training and job placement to young adults involved in the court system. The 2016 fiscal year budget for these programs was approximately $6.5 million, serving 1,146 individuals.

On the health side, five programs remain, their goals ranging from creating adolescent-friendly health services, to increasing access to healthy foods, to offering parenting support to young adult fathers. The newest and biggest ticket item is the $30 million Connections to Care, a project of the federal Social Innovation Fund, which trains staff at community-based organizations (CBOs) to better provide mental-health support to their clients. The program is intended to reach up to 40,000 New Yorkers over five years and NYC Opportunity has selected 15 CBO partners.

After more than a decade, there is a greater sense of what a successful program looks like. “There is good evidence about what works,” says Matthew Klein, Executive Director of NYC Opportunity. “Increasing wages, helping people achieve greater levels of education and work-related training, reducing critical expenses like housing and childcare, ensuring access to benefits and services, these are all things that if you say, how should we think about spending money, it’s in those areas.”

While progress is being made, the numbers are still startling, as nearly half of all New Yorkers continue to be in or sit precariously close to the poverty threshold, despite a rebounding economy.

This year’s poverty measure shows that 5.1 percent of New Yorkers are in deep poverty, with income less than 50 percent of the poverty threshold, or making less than $16,201 for a two-adult, two-child family. There have been no significant changes in the deep poverty rate under de Blasio, or under his predecessor. And the difference in the overall poverty rate since CEO’s creation in 2006, 20 percent compared to 19.5 today, is not so different either.

“Part of the work is even when we know on paper that there is evidence for a particular approach it still takes a fair amount of work to see what plays out in practice. We by no means have all the answers so it’s both a question of continuing to look and see how evidence-based models play out in practice and [doing] more to invest in what works,” says Klein.

Nancy Rankin, vice president for policy, research and advocacy at the Community Service Society, praised the mayor’s efforts in reducing poverty and providing more opportunities to low-income families, particularly his expansion of paid sick leave to small businesses and the manufacturing sector, his expansion of early childhood education through Pre-K for All, and his push to increase the state’s minimum wage.

However, she cautions that more needs to be done to ensure these programs and policies reach those who need it most. “It’s one thing to pass these laws but you can’t assume that everyone is going to get paid sick days or get the wage they are entitled to,” said Rankin.

The Community Service Society found that 55 percent of low-income workers who were entitled to paid sick days had heard little or nothing about the law, and that 34.4 percent of low-wage hourly workers were receiving wages below the minimum wage.

Klein agrees that “simply having a program or policy is not enough, there needs to be a strong focus on outreach and connecting people to services, and working to ensure that programs and services are being delivered effectively.” He points to the work of the Public Engagement Unit, which is dedicated to outreach and ensuring that New Yorkers are aware of the laws and programs available, and to the Department of Consumer Affairs’ enforcement efforts.