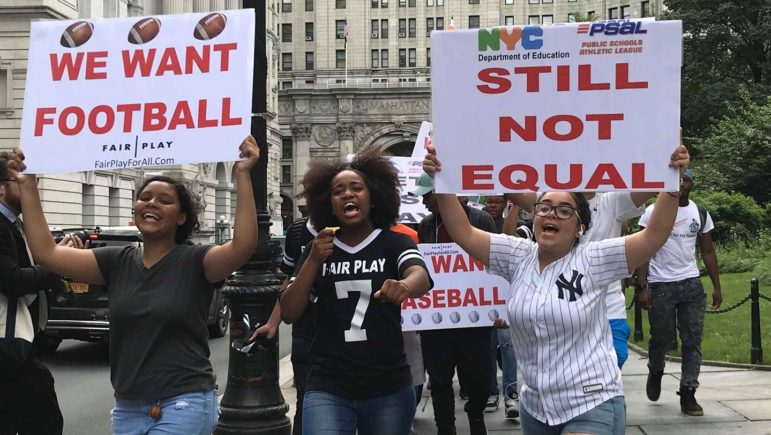 Some 70 students marched from their schools in the South Bronx to Lower Manhattan to attend last week’s rally.

Four high school students are named plaintiffs on the case, including Bronx Academy of Letters’ Matt Diaz, a junior, and Lisa Parks, a sophomore.

New York Lawyers for the Public Interest, along with student-led organizations IntegrateNYC and the Fair Play Coalition, held a rally outside Tweed Courthouse Thursday morning, where the lawsuit was formally announced. Some 70 students marched from their schools in the South Bronx to Lower Manhattan to attend the rally. Demonstrators chanted “Still not equal!” with drums and whistles in their hands.

Parks, 16, a speaker at the rally, tells City Limits she wants to go to the Olympics for track. Without the sports at her school, she cannot take part in PSAL competitions. “I feel kind of lost,” says Parks. Bronx Academy of Letters principal Brandon Cardet-Hernandez says knowing the power sports can have on a community makes this painful. “I’m the person they’re going to who is supposed to have the answers and I have to say ‘I don’t know… I don’t know why this other high school that you visited has 22 teams and you don’t.'”

“The biggest thing a school can do is increase their requests for sports and work directly with PSAL,” explains IntegrateNYC’s executive director, who uses the name Zaps. Both Diaz and Parks have made multiple requests to PSAL and have been repeatedly denied. Diaz did request soccer in his freshman year and was given a soccer team the following year. But his school is still without football, track, and volleyball. “We’ve been calling them, emailing them. [DOE] never told us a reason. They said they’re ‘working on it,'” said Diaz.

To create more transparency between the DOE and the public, Councilman Antonio Reynoso recently introduced legislation 242, which would require the city to provide a report on school athletic funding. “What I’m asking for is data…so we can make a better assessment of exactly what’s going on,” explains Reynoso.

The issue of sports inequity is one IntegrateNYC and the Fair Play Coalition have been fighting for a number of years. Most recently, in January, the Fair Play Coalition took a knee at the Teachers Unite “Full Court Press,” an annual basketball fundraiser against the the schoolhouse-to-jailhouse track. “No matter what source of activism and advocacy has been going on, nothing has changed,” says Iachan. That’s why she feels a lawsuit was the next step that needed to be taken.

“We are dedicated to providing the maximum number of opportunities for all students to play on sports teams,” Department of Education spokesman Miranda Barbot says in a statement. “We are continuing to add more teams each year in districts across the city and work closely with schools to assess and address their individual needs in an equitable manner.”