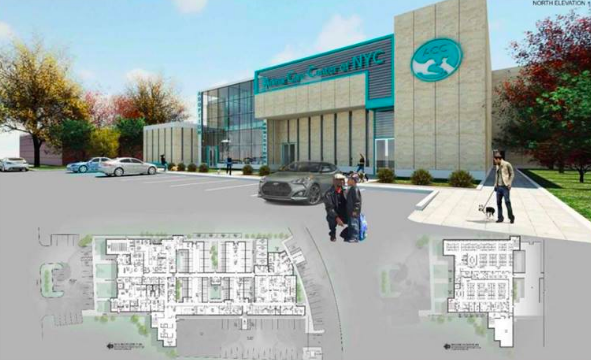 A rendering of the proposed shelter.

The Bronx has over 1.4 million residents yet does not have its own animal shelter. Now, finally, the city has proposed a state-of-the-art facility at 2050 Bartow Avenue that will shelter over 200 homeless animals as well as provide adoption, veterinary and education services.

The need for this facility is evident in the long lines even in harsh weather around Fordham Plaza for the low-cost “vet-mobile” that treats a limited number of pets on a first-come, first-served basis. It is heart wrenching to witness fellow cash-strapped Bronx residents in tears as they are turned away with their pets untreated. Many Bronx residents have to trek for miles outside the Bronx for low-cost veterinary care.

The proposed Bronx animal shelter will not only serve The Bronx but will also ease the burden on existing shelters that are overcrowded and where, as a result, the quality of care is compromised and animals are more at risk of sickness and euthanasia. Just this recent Memorial Day weekend, over 300 animals were surrendered to the existing animal-care centers. The Bronx animal shelter will not only provide additional space but with the educational programs and low-cost spay-and-neutering, it will prevent unwanted litters as well as keep pets in their household if issues can be resolved.

CityViews is City Limits’ showcase for opinions from around the city and the world.

The Bartow Avenue site is located in a commercial strip at a transit hub, which makes it accessible via public transportation for many Bronx residents. The location doesn’t interfere nor interact with the residential zone of Co-op City nor does it influence in any way Co-op City’s policies including their no-dog rule. The proposed facility includes 68 parking spaces, 39 for clients and the remaining 29 for staff and shelter vehicles.

Despite the clear need for this sensible facility, there is resistance. On May 20th at the Community Board 10 housing and zoning committee hearing, there were yelps of anger that people must take priority over animals and that the city failed to consult with neighbors before proposing the shelter site. The hearing was organized around opposition to the proposed animal shelter even before the city presented its case. Yet the people in attendance don’t’ make up half of one percent of Co-op City’s 50,000 population.

The same sentiments against the Bartow site were expressed by Community Board 7 in 2008 before it voted against an animal shelter at the old Fordham library location. This time, real-estate interests and a hired-gun lobbyist are part of the discussion to take the site away from the proposed Bronx animal shelter and reserve it instead for different uses, including supportive housing for homeless veterans. The Riverbay Corporation, Co-op City’s property management company, wants to take away the site for a youth center. However, some years ago, Riverbay’s board of directors voted against a youth center at a large space that used to be a movie theater at the Bartow shopping center. They voted against it so they could instead rent it to stores, yet it still remains vacant and available for a youth center.

City Councilmember Andy King, whose district includes Co-op City, said his position on the shelter was about putting people before animals as well as him doing as his community wants him to do. But many of his constituents including residents in Co-op City will benefit from the close proximity of low-cost veterinary services for their service animals (which are allowed under the no-dog rule). There will also be job and volunteer opportunities for both youth and seniors. And there is clearly a need for more animal services there: In a recent letter to the editor of the Co-op City Times, residents expressed their need for a dog run for their quality of life and health.

Without more community support at the next public hearing on June 15 and without the action of elected officials who spoke words of support in the past, the Bronx will lose its golden opportunity of ever having its own animal shelter. It took the city three years to find this site after over 50 site visits throughout the Bronx. The City Council just passed a bill mandating full-scale shelter in every borough by the year 2024. Now the Council can follow through on its own bill by voting for the proposed Bronx Site on 2050 Bartow Avenue.

An animal shelter is not a luxury but a necessity in a civilized society. As Mahatma Gandhi said, “The greatest of a nation can be judged by the way its animals are treated.”

Roxanne Delgado is a member of Bronx Animal Rights Electors.

11 thoughts on “CityViews: Bronx Animal Lovers Must Fight for Their Borough’s Proposed Shelter”