Workers Divided on the Proposed Change to the Tipped Wage 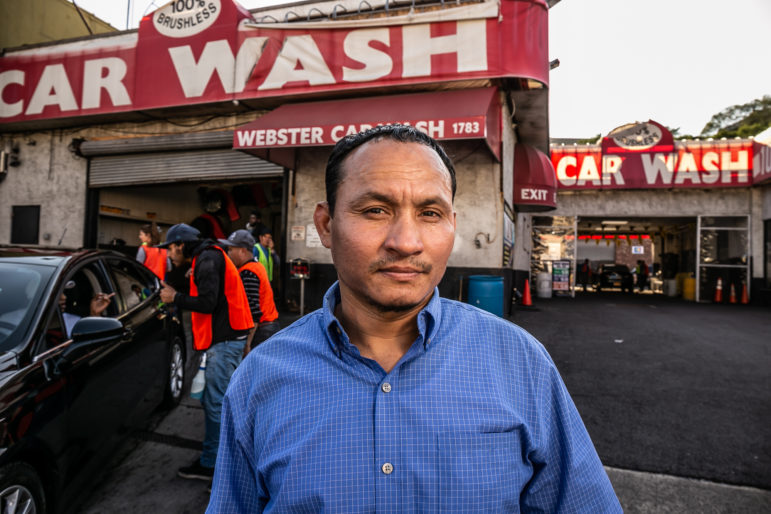 On a recent late May evening, Ernesto Salazar in front of a car wash where he worked for nine years, For nail salon workers and car washers, weather often dictates how much they are able to earn.

By the time Yolanda de Jesus gets home each night, dinner is long over and her daughter is often asleep. She and her husband have fought over her long hours, and both worry she is missing her daughter’s childhood.

De Jesus works in a nail salon in Manhattan, and because her hourly wage is so low, she frequently works between 10 and 12 hours a day. As a tipped worker, she legally makes below minimum wage, and must rely on customers’ tips – which are few and far between – to help support her family.

“No one knows that we depend on tips,” de Jesus says. “The majority of our clients don’t know we depend on the tips they give us. We never know if we’re going to have enough to cover our basic needs.”

But de Jesus’s situation could soon change: Governor Andrew Cuomo has proposed an end to the subminimum wage for tipped workers in New York, and is holding public hearings through June.

Under the current system, employers can pay tipped workers a base wage below the minimum wage, allowing tips to make up the rest of the paycheck. If Cuomo’s proposal goes through, however, tipped workers would earn the standard minimum wage, just like a cashier at Target or a fry cook at McDonalds. Of course, customers would still be able to leave tips for service, but the tips would be purely a bonus.

However, not all tipped workers are cheering the move. At a recent public hearing in Long Island for the proposed rule, groups of restaurant workers came out in vocal opposition. They worried if they earned minimum wage, customers would stop leaving tips and their incomes would drop. As one of the many nail technicians in attendance stood up to give her testimony, a group of restaurant workers started chanting “Servers! Servers! Servers!” as if it were a high school basketball game. As more and more nail technicians and car washers spoke, some restaurant workers booed or made sarcastic comments.

“We feel we should be separated from nail technicians and other workers like that,” says Angela Collazo, a server who attended the hearing to oppose the proposed rule change. She and her coworkers work at Miller’s Ale House in Staten Island. They left the auditorium dissatisfied, feeling that the hearing had been dominated by the voices of people who did not reflect their interests.

“On average we make almost $30 an hour with tips,” Collazo says. “It’s not the industry that needs to change. It’s these people’s employers who need to change.”

Income inequality, even below the minimum wage

In New York City, minimum wage is $13 an hour, but the subminimum wage for food service workers is $8.65. Service employees, like nail technicians and car washers, make more, at around $10.85.

When the Fight for 15 swept the nation in 2013, and fast food workers pushed to raise the standard minimum wage, tipped workers were left out of the conversation. Many believed that tipped workers could make far more than minimum wage through tips. But while this may be true for servers and bartenders, who can make as much as $25 or $30 an hour with tips, workers like de Jesus struggle just to reach the $13 minimum.

According to the New York Department of Labor, the average yearly income for servers in New York State was $30,830 in 2013 to 2016, while the average yearly income for a nail technician was almost $10,000 less, at $21,730. And while an experienced server made an average of $36,310 per year, an experienced nail technician was only able to raise his or her yearly salary to $22,750. This is despite the fact that nail technicians make a higher base wage than servers do – the difference came from tips.

And tips are fundamentally unreliable, given at the will of the customer. So when there are no customers – no tips. For nail salon workers and car washers, weather often dictates how much they are able to earn. In the colder months, fewer people come to get their nails done. And when it’s raining or snowing, fewer people come to have their car washed.

De Jesus says the worst months are the winter. Very few customers come to the salon and often this makes her boss angry. He takes it out on his employees.

“According to him we’re ‘not doing anything,'” she says. “So he makes us clean the entire salon. So we’re still working 10 to 12 hours but we’re not making any tips. Sometimes we’ll get home after a 10- to 12-hour day and we still won’t have enough to cover our basic expenses.”

According to Ernesto Salázar, who has worked as a car washer in New York City for the past 15 years, many employers will simply send their workers home if it is raining. Not only do they not get tips, but they miss out on their hourly wage.

“When it’s raining, 99 percent of car washes are closed,” he says. “And there’s nothing you can do – the boss determines your schedule, and if one of your shifts falls on a rainy day, you just lose that day’s work.”

With such an unstable income, it is hard to plan or to save for the future, Salázar says. And since they work such long hours, it is nearly impossible to pick up part-time work elsewhere.

A different story in restaurants

The situation facing many restaurant workers is very different, however. Amanda Clemens, 30, is a bartender in Saratoga Springs, a town in upstate New York. She drove four hours to Long Island to attend the hearing, in order to oppose the proposed rule.

“Restaurant workers make a lot more money than these other workers,” she says. “I didn’t even know you had to tip a car-wash worker. I didn’t know that until I went to the hearing. I feel like such a jerk.”

Clemens has been working in restaurants in Saratoga Springs since she was 15 years old, and it has allowed her to make a life for herself in the small town near the Adirondacks. She and her husband have built a house by a lake, and they are currently trying to start a family. She argues that increasing the base wage for tipped workers will cause restaurant owners to raise prices, and customers will respond by tipping less. Some employers may even cut hours, she added.

If it were up to her, she says, she would separate the restaurant industry from other tipped workers.

“I think, in the end, we’re being grouped together and we don’t suffer the problems that they are suffering,” she says.

Many of the problems faced by workers like de Jesus or Salázar go beyond a lack of tips, and include poor working conditions, wage theft and an absence of overtime pay. In part, this is demographic. The majority of the tipped workers in nail salons and car washes in New York City are immigrants, many of whom speak little or no English. This means they are less likely to know their rights as workers, making them more vulnerable to exploitation by employers.

Darren P.B. Rumack is an attorney at The Klein Law Group in New York, and his work focuses on wage theft and workplace discrimination. He says around 60 percent of his clients are immigrant workers, most of whom are not earning overtime pay, or are not making the legal minimum wage. Many came to him with questions, and were unaware their rights were being violated—undocumented workers in particular, he says, were most likely to be unaware of their rights and had more fear about taking action.

He added that wage theft was more common among industries that are less regulated, such as car washes and nail salons.

“The practices are less established in those industries. It is understood you tip your server. In a car wash, you see the tip jar at the end—some people might give $1, some nothing. It is less formal.”

Language is yet another problem. According to Dolma Sherpa, who works in a nail salon in Manhattan, perhaps the biggest obstacle immigrant workers face is the fact they do not speak English. Sherpa came to New York from Nepal almost four years ago, and speaks enough English to get by. She is part of a union for Nepalese women workers based out of Queens, which has helped her learn her rights as a worker and occasionally stand up to her boss.

“The language barrier is the main problem,” she says. “They don’t know how things are supposed to be. Whatever the boss says to them, they say, ‘Yes, yes, okay.’ Because they want the job. They get taken advantage of because they don’t understand.”

Of course, the split between tipped workers is not quite so definite. Not all servers and bartenders are opposed to ending the subminimum wage – some look forward to the stability promised by a standard income. Others point to the fact that, no matter the change in hourly wage, customers are still allowed to leave tips, which could lead to a net gain.

A report from 2014 by the Restaurant Opportunities Centers (ROC), a nonprofit group for career restaurant workers, found that rates of sexual harassment were twice as high among women making the federal subminimum wage than women making the standard minimum wage. A majority of the women surveyed by ROC said that depending on tips had made them more likely to tolerate inappropriate behavior from customers and management. The report argued that the tipping system made some customers feel entitled to mistreat servers, and that servers were reluctant to speak up because it could hurt their paycheck. Since then, many restaurant workers and former restaurant workers have come out in support of eliminating the subminimum wage for tipped workers. Cuomo himself cited the high rates of sexual harassment as one of the reasons for his proposal.

Apart from money, de Jesus, Salázar and Sherpa all mentioned a desire for recognition and respect. They felt that the lower hourly wage was an indication that their labor was valued less, and that it did not acknowledge the effort required.

“Many people think that our job is easy,” de Jesus says. “But it’s not. Cutting and primping and painting nails is not an easy job. It’s professional work and it should be recognized just as the people who work in offices are recognized.”