By Jose Ramirez and Kabira Stokes. 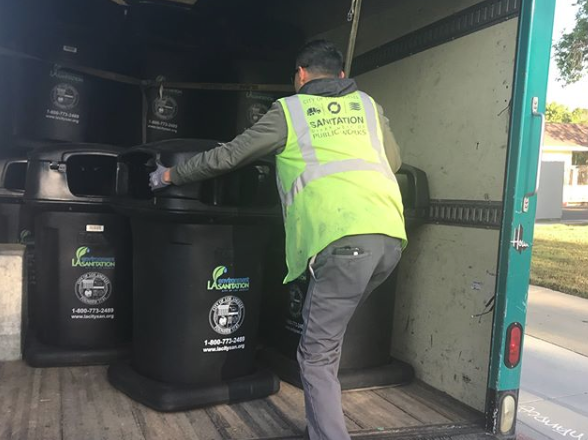 Only a few months into the new RecycLA program, something new and exciting is happening across Los Angeles: A growing number of the city’s restaurants and grocery stores are donating edible, unsold food to places like the St. Francis Center, which utilizes the donated food to serve over 100,000 homeless meals and provide over 18,000 pantry visits for food insecure families each year.

Other businesses like office buildings, apartment complexes, and tech companies are making the effort to properly recycle unwanted computers, smartphones, and other electronics through Homeboy Recycling—a local company that offers comprehensive electronics recycling, data destruction, and IT asset disposition services in downtown LA. Until recently, many of these perfectly usable goods would probably have been thrown in a dumpster, and trucked to a landfill. Now, they are properly recycled or reused while creating good recycling and repair jobs for Angelenos, especially those who face barriers to employment such as formerly incarcerated individuals.

Driving this new commitment to waste reduction is smart policy that is far more than a successful one-off Earth Day event. The city’s new RecycLA program requires the seven franchised waste haulers to meet a number of robust environmental, labor, customer service, and community benefit standards, which are part of each company’s enforceable contract with the city. For the first time, large commercial waste haulers are actively collaborating with local recyclers and food rescue groups, with the shared goal of keeping as much waste as possible out of landfills. We hope New York City can learn from and replicate the parts of RecyLA that are working well, including the strong waste diversion standards, and Minority- and Woman-Owned Business (MWBE) subcontracting goals that are driving these partnerships between large waste companies and small innovative recyclers rooted in our diverse communities.

One benefit for our small operations is funding. The commercial haulers are now required to contribute $1,000 for each 100 customers to a fund that helps organizations like the St. Francis Center up to process more and more donations and waste each year. Other small recycling companies like Homeboy Recycling are working as subcontractors to the larger commercial waste haulers serving each commercial zone.

Also driving the increased interest in local reuse and recycling is a contract provision requiring the franchised waste hauler for each zone to reduce the amount of waste sent to landfills from each zone by 35 percent by the year 2025. If annual reduction goals are not met, the city can impose substantial fines on the franchised haulers.

As a result of these new standards, commercial haulers are beginning to educate business customers about waste reduction and recycling options, and actively encouraging them to use local recyclers and donation centers like ours—something that almost never happened under the old, chaotic “Wild West” waste system in LA, and something almost never happens in New York City. The St. Francis Center alone has received a record-breaking 350,000 pounds of additional edible food since RecycLA launched last summer.

DSNY and the diverse stakeholders now planning the transition to a commercial waste zone system in New York City have ample opportunity to incorporate lessons from Los Angeles, and can replicate the parts of RecycLA that are working well. By creating an efficient, exclusive customer base for each of the seven franchised haulers, our city was able to set high standards for environmental impacts, customer service, and workers’ rights. A similar system will allow New York to meet the city’s zero waste goals, create high-quality local jobs, and alleviate hunger by aligning the business community, responsible waste hauling companies, and small local recyclers.

A well-designed commercial waste zone RFP will be a win-win-win for the environment, for green job creation, and for New Yorkers in need.

* * * *
Jose Ramirez is the executive director of St. Francis Center which for 45 years has provided hunger relief to homeless and extremely low-income families and individuals in Los Angeles. Kabira Stokes is the founder and CEO of Homeboy Electronics Recycling.