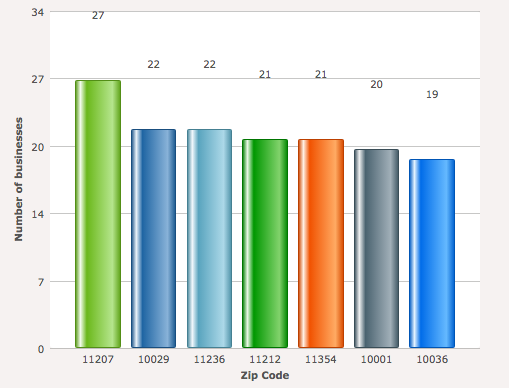 A “food swamp” is an area where unhealthy food, like high-calorie fast food and junk food, is more readily available than healthy food. East New York is the biggest swamp in New York City.

The highest quantity of fast-food chains is not in tourist-central Times Square, not even overcrowded Midtown. Instead, fast-food chains in New York City are most prevalent in the low-income outskirts of Brooklyn.

In just 10 minutes walking down Pennsylvania Avenue in East New York, there are at least 10 different fast-food chains to eat at. All of New York’s best-selling chains line the street –– Burger King, Wendy’s, McDonald’s, Popeyes, White Castle. A salty, greasy aroma permeates the air. The street is a sodium hotspot.

A “food swamp” is an area where unhealthy food, like high-calorie fast food and junk food, is more readily available than healthy food. East New York is the biggest swamp in New York City. There are 27 fast-food chains in its zip code 11207, and another 14 in its zip code area 11208.

In the $234 billion fast-food industry, McDonalds, Subway, Taco Bell and Burger King were among the most successful chains in America last year. Fast-food chains have grown 14 percent over the last decade in New York City. Brooklyn––the largest increase in the city––is up by over 3 percent just this past year. And according to the Center for an Urban Future, which tracks chains in the city, that growth is likely to continue.

In the 11207 zip code of East New York, there are seven Crown Fried Chicken’s, four McDonald’s and three Subways. The abundance seems arbitrary, but some community members find it hard to resist.

“I want to cut down on eating fast food because I feel so gross after eating it,” says Jazmin Childs, a native East New Yorker. She lives less than 15 minutes away from there Popeyes on Linden Blvd. and eats there at least once a week. As to why it’s hard to quit the beloved popcorn-chicken joint –– “it’s super convenient,” she says.

“Linden Blvd.” is what East New Yorkers call the fast-food strip in their neighborhood. But most of the chains actually swarm the intersection of Linden Blvd. and Pennsylvania Avenue. The busy traffic-hub also makes Linden Blvd. an ideal street for drivers heading to/from the Belt Parkway – Checkers, Burger King, Wendy’s are all “drive-thru’s”.

Cornell, a manager at the Checkers on Pennsylvania Avenue, said there are fewer walk-ins at the restaurant. Most customers order at the drive-thru because it’s even more convenient.

The term “food swamps” was just introduced a few years ago. Food swamps typically exist in food deserts, which are neighborhoods with limited access to grocery stores and healthy food options. Previously, scientists presumed food deserts were linked to severe health risks, like obesity. But it turned out the existence of food swamps more accurately predicts obesity rates than the existence of food deserts can, according to a study published in December by the International Journal of Environmental Research and Public Health.

The study was led by Kristen Cooksey-Stowers, a fellow at the Rudd Center for Food Policy and Obesity at the University of Connecticut. She knew about food deserts, but wanted to look at metrics for other food environments.

“Obesity is a consequence of food swamps,” Cooksey-Stowers says. Her study showed that the obesity rate is higher in areas with four or more unhealthy retailers for every one healthy option.

In fact, diabetes is more common in New York City’s fast-food swamps. Adult Type 2 Diabetes is 2.5 times more prevalent in food swamps, while Adult Type 1 Diabetes is 1.5 times higher, compared to areas without fast food, according to a new study published this April in the Journal of the Endocrine Society.

“If you located some of these same [fast-food] restaurants in higher-income areas, they probably would go out of business,” says Dr. David Lee, who conducted the study at the New York University School of Medicine. “Does health behavior drive the demand in a particular region, and [fast-food] restaurants just come in and supply that demand?” he asks.

The disproportionate amount of fast-food chains in low-income residential areas is plain to see. It’s not uncommon to see multiple of the same chain in the same vicinity.

“People of color are exposed to food swamps because these are communities that have been historically disenfranchised,” Cooksey-Stowers says.

Healthy food acess has been a priority for East New York Farms! for 20 years. They operate three urban farms, including a youth farm, one community garden and a farmers market––the only place to find local and organic produce––in the neighborhood. Specialty Caribbean crops like karela, bora, and callaloo are grown in their vicinities.

Every year, 35 young adults from East New York are selected as interns at the farm, and learn about health, nutrition and food justice.

“There are over 60 community gardens in East New York. A lot of that work is already happening,” says Jeremy Teperman, a Youth Farm Manager at East New York Farms!.

“It’s very difficult to change the foodscape,” Teperman says. “A lot of the [interns] come in with snacks that they brought from the bodega.”

But many East New Yorkers care about produce. After all, a majority of the community are immigrants who come from agricultural backgrounds. But the juxtaposition of farms and fast-food is hard to ignore.

“It became a breeding ground for these fast-food chains,” said Council Member Rafael L. Espinal of District 37, which includes East New York, where he grew up. “They know that it’s very likely that they have a higher clientele in those areas.”

Access to healthy food was a key issue during discussions of the East New York Rezoning Plan that passed two years ago. Espinal says those zoning changes will hopefully incentivize developers to build grocery stores and other healthy food outlets through the Food Retail Expansion to Support Health Program (FRESH), which offers tax breaks. A “food manufacturing kitchen incubator” is included in one of the projects the city has approved since the rezoning was passed.

A note on the data

Five years ago, Baltimore was one of the first cities to map their own food swamps. At the Bloomberg School of Public Health at John Hopkins University, researchers used ReferenceUSA to do an analysis of fast-food chains and carry-out restaurants. Using ReferenceUSA, City Limits plugged in the 17 most prominent fast-food chains across the five boroughs (not fast-casual restaurants), as listed by the Center for an Urban Future, to determine what zip codes had the highest quantity. The NAICS code “fast-food” does not include pizza palors, Chinese take-out, or coffee shops – which were not included in this study. 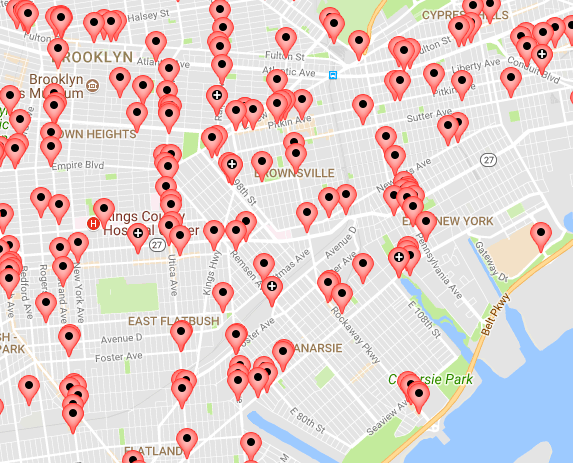 A map of all fast-food chains in Brownsville, East Flatbush, Canarsie and East New York.