Brewer Votes No With Conditions on Inwood Rezoning 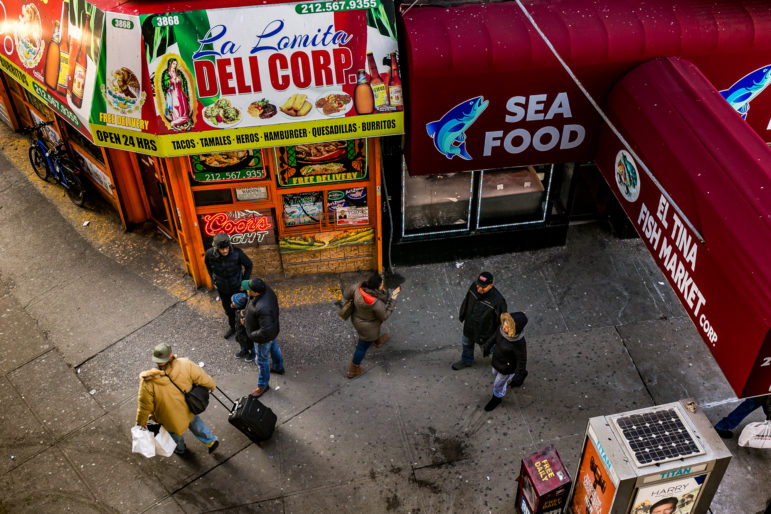 On Wednesday, Manhattan Borough President Gale Brewer voted no on the Economic Development Corporation’s proposed Inwood rezoning. In an accompanying report, she articulates concerns about residential and business displacement and offers a variety of recommendations. Her non-binding decision sends a message to the City Council and the de Blasio administration that she will not back EDC’s plans for Inwood unless substantial changes are made.

“Inwood is gentrifying more slowly through the attrition of affordable housing and the influx of newer residents searching for more affordable Manhattan rents. These circumstances make resistance to, and skepticism about, a rezoning plan completely rational and make it critical that any rezoning plan must contribute significantly more to the solution of these problems than to their exacerbation,” she writes in the report. “While I do support a rezoning of Inwood, I cannot support the rezoning as proposed.”

EDC’s Inwood rezoning plan is the fifth neighborhood rezoning sponsored by the de Blasio administration to move through the ULURP process by which a rezoning is approved or disproved. The proposed rezoning would allow new residential and commercial development on and east of 10th Avenue, as well as on Dyckman Street, West 207th Street and Broadway (also referred to as the Commercial ‘U’), while applying contextual zoning—protections to preserve neighborhood character—for several residential areas east of 10th Avenue. In all upzoned areas, the city’s mandatory inclusionary housing policy would apply, requiring that 20 to 30 percent of housing be income-targeted.

The land-use application also includes other actions such as the redevelopment of the Inwood library with income-targeted housing, a new library and a pre-K facility, and regulations to improve waterfront access.  The city has also put forth the Inwood NYC Action Plan, which promises a list of investments in subsidized housing, anti-displacement strategies, neighborhood infrastructure, local businesses and workforce development.

Brewer’s report asserts that while a neighborhood could become unaffordable over time without a rezoning, a rezoning could also exacerbate those trends.

“The argument for accepting this plan is that if we do nothing and current trends continue, at some point in the not-too-distant future…rent-stabilized apartments will continue to leave stabilization…local businesses will continue to face increasing rents as businesses all over the city do and will eventually be replaced…and all this will occur without the construction of any new permanent affordable housing. This is quite possibly what will happen,” she writes. “But no one can expect a neighborhood to accept a rezoning that raises the specter of displacement in the short and medium term, because it is not nearly as bad as what is likely to happen in the longer term.”

Brewer repeatedly critiques the city’s environmental review process, including faulting it for failing to analyze the risks of a rezoning on rent-stabilized tenants and for underestimating the risks to small businesses. She also writes that the community planning process was not as “well-coordinated and inclusive” as the one that took place in East Harlem, where Brewer and other stakeholders created the East Harlem Neighborhood Plan. (Some East Harlem groups would beg to differ and argue that the East Harlem Neighborhood Plan process was not inclusive and presupposed the inevitability of a rezoning.)

She also recommends the city work diligently to assist developers who commit to building 100 percent affordable housing and that significantly more than 50 percent of the total units created through the rezoning plan are affordable, with a minimum of 20 percent of units at average of 40 percent Area Median Income. She urges the use of the two options under the mandatory inclusionary housing policy that target lower income brackets, and calls for additional efforts to reach the 30 percent Area Median Income bracket.

She also critiques the city’s strategies to protect tenants as too “vague,” and questions the realism of the city’s promises that it will be able to work with the state to tackle illegal rents in rent-stabilized buildings. (Advocates say the state is not sufficiently proactive to protect rent-stabilized tenants from illegal overcharges.) Brewer calls for $7.5 million in additional funding per year for “the provision of attorneys, supervisors, organizers, community meeting space and outreach” to defend tenants’ housing rights and fight rent overcharges. The figure is based on her calculation of the cost of providing services to every household with incomes at or below 200 percent of the federal poverty line.  She further calls for investments in Dyckman Houses, the adjacent NYCHA development.

The report also includes strategies to protect small businesses. In particular, it expresses concern about the displacement of the existing small businesses in the Commercial ‘U’ and calls for “the removal, or at a minimum, the phase-in” of the rezoning of this area. The phase-in approach would entail delaying the rezoning of those corridors until other areas of the rezoning had generated 50 percent of the commercial floor area that the city predicts will be generated as a result of the proposal.

“During this period, EDC and SBS would be required to develop and fund Inwood-specific programs that work directly with small businesses in the Commercial ‘U’ and developers of new retail space and provide relocation and financial assistance where necessary,” the report recommends. It also says the city should create space that could house temporarily displaced businesses as well as an incubator space for new businesses.

The report further recommends “opportunities for new local businesses, employment, and cultural resources to maintain Inwood’s diversity and local character,” with an emphasis on the creation of new arts and culture spaces.

While her recommendations in many ways mirrored those of Manhattan Community Board 12’s and drew on some ideas in Uptown United, an alternative plan crafted by a coalition of neighborhood groups, there were some differences.

For instance, Brewer does not ask for lower-density rezoning designations or for lower height limits in the areas east of 10th Avenue. She also supports moving forward with the redevelopment of the library as part of the current rezoning, though she says the city’s estimate that the construction of a new library will take three years “is likely overly optimistic” and calls for the prompt designation of a temporary library site that will “be able to provide a significant portion of the programs and services currently provided.” She mentions lower zoning designations for small homes, but not expanding contextual rezoning to other parts of the neighborhood. And while all shared concerns about upzoning the Commercial ‘U’, Brewer’s “phase in” approach is certainly new.

Brewer also thanks the EDC for making some revisions to their original plan, which are described in an amendment published on April 17 that can be viewed here. Those amendments include, among others, the creation of a manufacturing district to which most of the wholesale businesses can be relocated, requirements in certain areas for “local retail and local service establishments” to occupy 50 percent of a ground floor, and steps to make transit more accessible to disabled residents.  But Brewer also says these changes are insufficient, and she calls for greater regulations to limit storefront sizes and a plan to accommodate auto-businesses that could be displaced, among other changes.

The proposal now moves to the City Planning Commission, and finally to the City Council, each of which will make binding votes on the project.

This Sunday Councilmmember Ydanis Rodriguez will hold a forum called “The State of Development in Northern Manhattan, Inwood Rezoning” to discuss his vision for the rezoning from 2:30 p.m. to 4:30 p.m. at Manhattan Bible Church, 3816 9th Avenue. The City Planning Commission will hold a hearing on the Inwood rezoning on May 9, 2018 starting at 10 am at the City Planning Commission Hearing Room, Lower Concourse, 120 Broadway.

5 thoughts on “Brewer Votes No With Conditions on Inwood Rezoning”