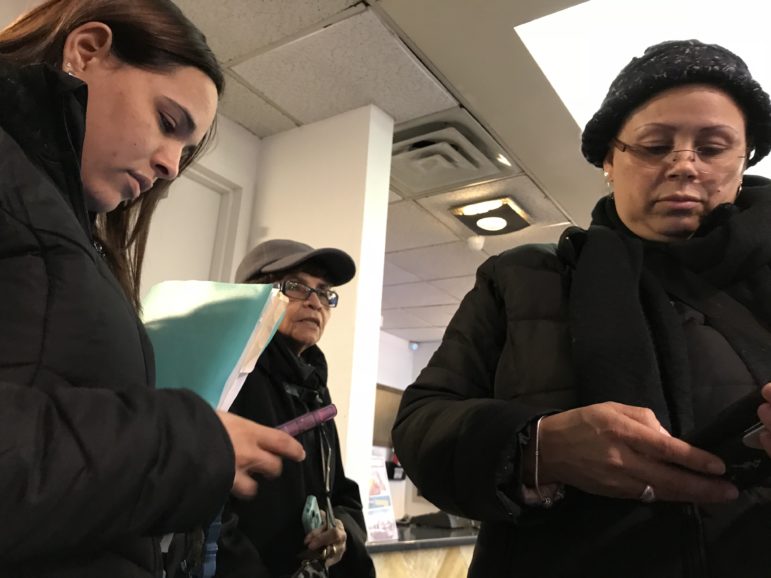 Andrea Tejada, left, 26, and Sofía Miranda, right, 43, are both living in a Midtown hotel following the devastation caused by Hurricane Maria in their native Puerto Rico last summer. They are in the lobby of the hotel waiting to depart to a Homebase location in the Bronx on April 6, 2018, where they are hoping to receive information about other more permanent housing options.

María, 27, a nurse who asked her name to be changed to protect her identity, arrived in New York City on September 27 with her 1-year-old daughter and 7-year-old son to escape the destruction caused by Hurricane Maria in their native Puerto Rico just one week prior. She left, among other things, for her daughter, who requires constant medical care to treat her disability.

“We only lasted seven nights,” Maria says. “The mosquitoes, the heat, and the pain were too much to bear.”

For nearly three months, they lived in a homeless shelter until, in mid-December, they were approved to move to a hotel room in Brooklyn under the Federal Emergency Management Agency’s (FEMA) Transitional Sheltering Assistance (TSA) program. Since then, they have been living month-to-month at a hotel in Williamsburg. On Sunday, she received a call from FEMA to let her know that she had been approved to stay for another month.

But on Monday, April 16, FEMA rescinded its offer. She did not qualify for an extension after all. Maria and her children have to check out of their hotel on April 21.

They are among the 86 families that have been asked to check out of their temporary housing hotels by the end of this week.

On Sunday night, Mayor de Blasio took to Twitter and Facebook to announce that FEMA told him that the agency is suspending its TSA program for 86 Puerto Rican families and individuals in New York City and would request them to check out by April 21.
In a letter addressed to FEMA on April 13 and signed by nine members of Congress, 11 city councilmembers and dozens of community leaders, de Blasio urged FEMA to reconsider and extend its deadline. In a tweet posted Sunday night, the mayor further pushed his plea. “The Trump Administration cannot abandon Puerto Rico,” it read. “Otherwise, we will do the job for them.”

TSA allows eligible families and individuals to temporarily live in participating hotels at no cost. At the request of Puerto Rico Gov. Ricardo Rosselló, FEMA granted an extension of the program until May 14. As of April 16, there are 171 families living under TSA in New York state and over 2,000 families in 35 states and Puerto Rico, according to a FEMA spokesperson.

That same spokesperson says that these 86 families did not meet the eligibility criteria for TSA. Survivors who can’t verify their occupancy, confirm their primary residence, have duplicate applications for assistance, and who have not claimed sufficient structural and utility damage are not eligible for TSA.

This is apparently what happened to María. She lived in an affordable housing complex in San Juan, which suffered structural damage, but she could not claim it because she never owned it. She says her former apartment is now occupied, and she doesn’t have contact with the current renter.

It’s also unclear how the city will be able to provide housing assistance for these families when the embattled New York City Housing Authority is under a state of emergency following a string of scandals, and has more than 200,000 people on its waiting list. A source in the mayor’s office with knowledge of the situation said that the mayor is awaiting a response from FEMA so the city can formulate a plan for these families.

De Blasio’s statement in the letter also contradicted comments he made in October, when he came under fire for saying the city could not provide housing funds for those displaced and encouraged them to only come to the city if they had family to stay with.

Julissa González Santiago, the director of constituent services at the city Office of the Public Advocate, defended the mayor’s initial response and insisted that those displaced should seek city services such as Homebase.

Most displaced families, if not all, are asked to go to Homebase, a homelessness prevention program run by the NYC Department of Homeless Services that serves people in the middle of an urgent housing crisis, such as an eviction or domestic violence situation. Their commitment to helping displaced Puerto Rican families, they say, is an exception to their services.

However, when some displaced families arrive at Homebase offices, they are encouraged to go to FEMA’s Temporary Sheltering Assistance Program instead and aren’t given a reason why, according to advocates and affected parties.

González Santiago provides an explanation. “If you qualify for FEMA hotel and the federal government is paying for a hotel, [the city would] rather you use that benefit first then exhaust that first before using the city resources,” she says.

Meanwhile, displaced families and individuals haven’t caught up to the shuffling of services and resources.

Cathia Infante, 26, arrived in New York City on December 3 with her husband and three children, aged 10, 6, and 3. They lived in a shelter until January, when she claims they were told by DHS to move to a TSA-approved hotel, under the promise that they would have room in the shelter after the TSA program was over. According to Infante, DHS said that if she and her family did not move to a TSA-approved hotel, they would automatically become ineligible for a city shelter in the future; they too urged her to exhaust all of FEMA’s services.

“They said they couldn’t give me any help until FEMA literally threw me out on the street,” she says. Infante is also among the people whose TSA extension was denied on Monday.

FEMA told her that her extension was denied because she failed to complete an inspection for her home in San Juan, but she claims the inspector never showed up.

Andrea Tejada, a 26-year-old widow, arrived in New York City in October but began living in a TSA-approved Midtown hotel with her four-year-old daughter in March. When she arrived at a Homebase office in the Bronx on April 6, the office was closed for a staff meeting.

Some displaced families say their biggest challenge when talking to Homebase and other city agencies is the language barrier. When Esther, 52, who declined to provide her full name pending an alleged domestic violence case, went to her Homebase appointment last week, the person in charge of her case only spoke English.

From what she understood, they also encouraged her to seek housing with a relative and reminded her that New York is in the middle of a housing crisis.

Most of the families prefer living in a shelter, because it offers more stability than living in a hotel, where they live month to month depending on the federal deadline. That stability, they say, puts them on the path to more permanent housing. Despite de Blasio’s suggestion, many of the families who were interviewed do not have relatives in New York City to live with.

Despite being the state with the largest Puerto Rican population—according to the U.S. Census Bureau’s American Community Survey, 1.1 million in 2016—New York is not the most popular destination for displaced Puerto Ricans. Florida, Texas and Pennsylvania, respectively, are the top three states that have received most Puerto Ricans since Hurricane María made landfall in the island on September 20 according to data provided by the Hunter College’s Center for Puerto Rican Studies; New York is the fourth.

While de Blasio initially announced a centralized, citywide initiative to assist an expected “substantial amount” of families in October, his office decided to pivot to a community-based model through 13 Homebase locations across the five boroughs, following lower-than-expected turnout and dwindling participation. About 2,100 families sought emergency services at the Julia de Burgos Performance and Arts Center in East Harlem between October 2017 and January 2018, and the NYC Department of Social Services officially moved its hurricane relief efforts to Homebase on February 12.

“We try to promote the city’s resources, because they are there,” González Santiago said. “But you also have to know how to navigate the city.”

Democratic Councilwoman Carlina Rivera, who is of Puerto Rican descent, blames the low turnout on both a lack of advertising for these services and on the overflow of Homebase services. “Homebase serves the communities that were referred there,” she said, “but the city’s biggest failure has been providing housing for these families.”

The Department of Homeless Services and the Human Resources Administration had not responded to request for comments at the time of publication.