Older Workers are Organizing to Fight Ageism on the Job 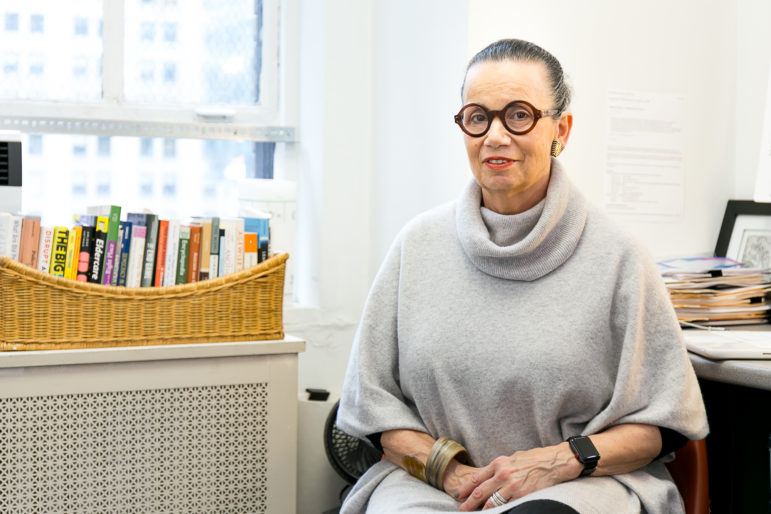 After serving as director of community outreach and the liaison to older adults in New York State Senator Liz Krueger’s office, Alice Fisher founded The Radical Age Movement, based in New York City, to tackle the issue of ageism.

Here comes grandpa. Rodger Parsons, who is 74 years old, had entered an audition for a voiceover gig 10 years ago when he overheard one of the people employed with the company utter those words. Since Parsons is a voice actor, viewers would not see Parsons’ face or necessarily be able to tell his age. But it was still an issue to someone in the room.

That put Parsons in the position of deciding how to react. “What does a black person do when someone says you can’t sit here? What does a woman do when somebody makes an inappropriate—whether it’s a statement or a physical movement?” he says. “I think it really comes down to what kind of world do we want to live in.” Parsons stepped up to the microphone and declared, “It’s not how grandpa looks. It’s how grandpa sounds.” He did not get the part.

Since people are living and staying healthier longer, many individuals cannot necessarily afford to retire at 65. With better health, vast numbers of older adults are able to keep working longer than past generations could. This reality has not stopped many employers and coworkers from believing it’s time for older adults to leave the workforce once they celebrate a certain birthday. When their employers act upon this belief, workers can be confronted with age discrimination.

“Booking a job in the voiceover world always involves chance. You hope the people conducting the audition will listen to how you sound, not judge you by your appearance,” Parsons says. “When there is an egregious incident, it’s nice to know there are remedies.”

“There’s a general perception even in New York City that it makes sense for companies to want to get someone younger, that there’s a benefit to youth that can’t be expressed. And, that’s a flat-out discriminatory deal. That’s not grounded in anything other than a stereotype,” says Brian Heller, a partner in the New York employment law firm Schwartz Perry & Heller.

Parsons later found out that the agency he auditioned for already faced an age discrimination lawsuit. However, many who suspect they faced discrimination because of their age do not sue. Those who take legal action often find that under the current law, age discrimination is a hard claim to prove.

In New York City, individuals can file age-discrimination claims with the NYC Commission on Human Rights within one year of the alleged discriminatory practice. The same deadline stands elsewhere in New York, but varies in other states.

AARP Senior Attorney Laurie McCann says that “age discrimination is very difficult to prove in a lawsuit” and “it is extremely rare to have a ‘smoking gun’ statement akin to ‘you are too old to do the job.’”

It’s hard to win age discrimination suits at least in part because employers are not liable under the ADEA if they show their decisions were based on “reasonable factors other than age.” In its 2005 decision Smith v. City of Jackson, Mississippi, the Supreme Court held that claims of unintentional discrimination can be made under the ADEA as long as the discrimination is not based on reasonable factors other than age. The U.S. Equal Employment Opportunity Commission (EEOC) issued a rule in 2012 to make the ADEA regulations consistent with the Supreme Court’s decision. The text of the rule includes the example of an employer requiring “candidates for jobs in its meat-processing plant to pass a physical strength test.” Employers, then, are able to pass over older adults for hires or promotions as long as they’re not making those decisions because of age. The rule, however, makes it easier for employers who discriminate against older workers to conceal their intent.

“Most people don’t come out and say, ‘We’re doing this because of your age.’ So you have to prove through circumstantial evidence,” Heller says. “And, that can be difficult because you have to prove a discriminatory intent when most people who have that intent go out of their way to hide it.”

After serving as director of community outreach and the liaison to older adults in New York State Senator Liz Krueger’s office, Alice Fisher founded The Radical Age Movement, based in New York City, to tackle the issue of ageism.

“People up until now haven’t taken it in the serious way that it should be taken,” Fisher says of ageism. “Over time, older adults have become marginalized in our society so that they’re not full participants the way that they want to be or should be.”

Through her experiences in Krueger’s office and currently as an activist, she has met hundreds of people who feel they have been discriminated against on the basis of their age. Fisher describes their predicament this way: “It’s a scary thing to think that, ‘Well, if I sue and then I want to get a job, now I’ll never get a job.'” 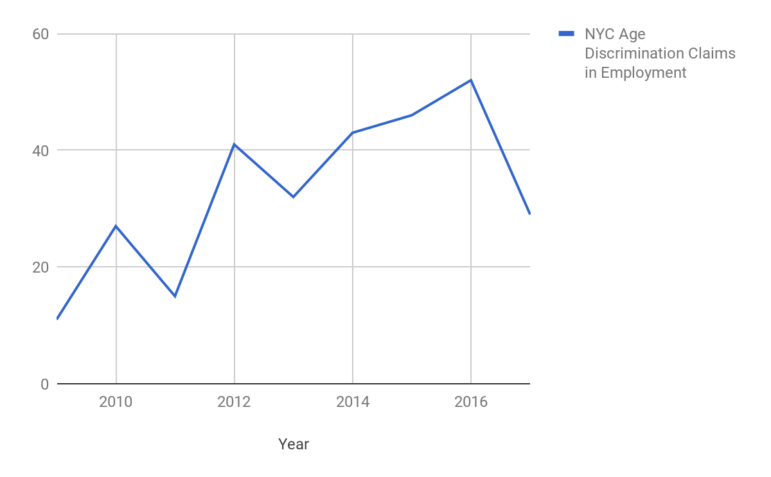 Stereotypes about older adults persist in the workplace

Where does the impetus for these discriminatory actions come from? Michael North’s research provides insights on the forces underlying age discrimination. North, Assistant Professor of Management and Organizations at New York University Stern School of Business, has researched intergenerational tension and ageism for over a decade, starting with his dissertation. One journal article he co-authored with Susan Fiske in 2016 examines sources of intergenerational tensions in the workplace that lead to the exclusion of older workers. North and Fiske found in their set of studies that younger adults were more reluctant to professionally network with older adults who seemed to violate expectations and stereotypes.

North says, “Where the tension exists is when these older adults are portrayed as not wanting to step aside and make way for the younger generation.”

He asks, “Who’s to be the judge, basically, of when it’s time for an older worker to step aside or not?”

Stereotypes about older adults can limit their opportunities to advance, or even stay in the workplace. In their research, for example, North and Fiske found that older workers received significantly lower training investment than did the other-aged workers.

“Changes in our lives happen at any age, but it’s common that we write things off that aging is the reason why someone can or can’t do something,” says Chris Widelo, Associate State Director for AARP New York City.

Given the misconceptions and prejudices about older workers, to return to the workforce as a full-time employee at an older age can be very difficult. Marlene Petlick was laid off from her full-time job at age 58. She had to take Social Security payments before turning 65 to cover bills—a move that will result in reduced monthly benefits for the remainder of her life—and she’s still paying off student loans. Her employer replaced her with a student worker. Although she understands that students today often fill the administrative assistant positions in academia, Petlick feels that her age is likely preventing her from finding a new full-time role.

“Everybody is saying the general wisdom is you can’t get a full-time job again,” says Petlick. “I’m trying to bust that common wisdom.”

She has been sending out applications since 2013 after she lost her job, but has received few interviews for full-time opportunities. Petlick works part-time meanwhile, but number of hours per week varies, which leads to financial instability.

As the workforce ages, workplaces will increasingly need to adapt

The U.S. Bureau of Labor Statistics projects that, by 2024, the labor force will grow to about 164 million.

“The presence of older workers has never been higher than it is now. People are delaying their retirements. If they even retire at all, they’re pushing it way into the future. It’s not just an ethical thing to think of ways to retrain older workers if they need it or retain older workers. It really does benefit businesses and the economy more broadly to adapt and accommodate,” says North.

“Older workers are the only segment of the labor force projected to grow in coming decades. Every other demographic is shrinking or staying the same,” North adds. “So when you think about it like that, you’re basically just adapting to the changing demographics in a manner that you really should.”

National Grid has implemented initiatives to retain older workers and adapt to the changing workforce. For their efforts they received the 2018 Age Smart Employer Award from Columbia University Mailman School of Public Health.

“Some of our experienced employees are not ready to retire and feel they have more to contribute. We provide them with a flexible environment that allows them to make that contribution. This might mean offering more vacation time so they can start to get a good balance in their lives and work reduced hours. It may also mean moving from field roles into office-based or classroom roles,” says Keith Hutchison, National Grid Senior Vice President, U.S. HR & Chief Diversity Officer.

National Grid also relies on retirees for support with storm response and restoration.

Hutchison says, “As we know, weather forecasts are not always 100 percent. We may be hit with a storm harder than expected and need to respond to power outages or other emergencies. Working with our experienced workers and retirees, we can ramp up very quickly and really lean on the people who know our business inside and out.”

Meanwhile, organizations like AARP and The Radical Age Movement are organizing their own programs to combat ageism in the workplace. AARP distributes resources about ADEA rights to employers and employees alike. AARP’s McCann, for example, encourages employees to “keep a record of any age-related statement or other incidents (such as younger colleagues being promoted or recommended for training instead of you) that suggest you are being treated unfairly because of your age.” The Radical Age Movement, along with over 30 co-sponsors, will host the “Rally for Age Justice” in Union Square on May 15th to bring visibility to the issue of ageism.

“Hitting 50 or older is not some type of prison sentence. For many people their lives are beginning at this age and they are taking on new opportunities,” says Widelo. “Every day we are all getting older and there’s really no number that says you have any desire to stop learning or stop contributing.”