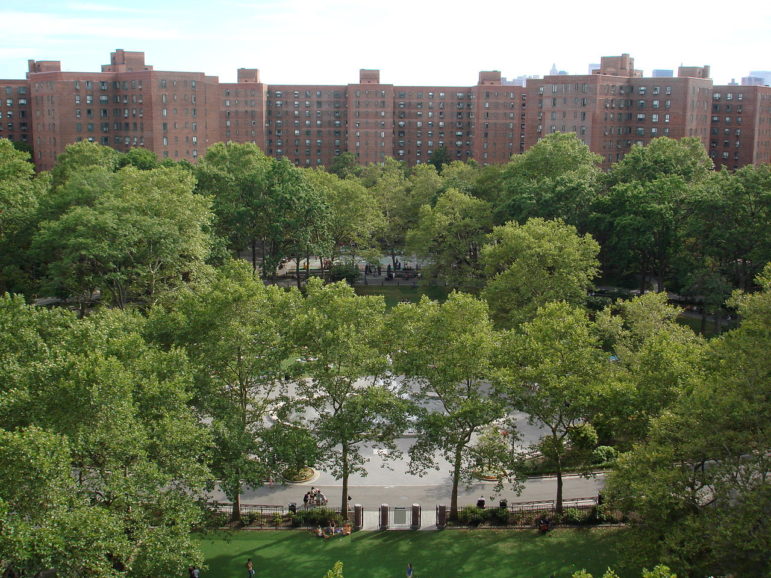 Stuyvesant Town, site of one of the de Blasio administration's most expensive, and controversial, housing preservation deals. Middle-class housing was saved there; the author wants more of it preserved and built.

As a nation, we continually focus on providing assistance to homeless and low-income populations. However, we need to begin shifting our focus to the working class, and providing these individuals with more stepping stones. Unfortunately, many working-class individuals are stagnating in the current system. We need to provide these hard-working New Yorkers with an opportunity to grow and succeed in today’s convoluted housing system.

While Mayor de Blasio’s housing plan does set aside 20 percent of its housing for moderate- and middle-income groups (i.e., people making between $77,000 and $138,000 for a family of three), the remaining 80 percent goes to extremely low-income households. There is no doubt that these low-income individuals need assistance as they are at the entrance to affordable housing; however, more work needs to be done to help moderate- and middle-income working-class individuals with affordable housing. It is well documented that middle-income residents in New York City live paycheck to paycheck, and lower housing costs would benefit them immensely.

What’s more, if we do not address the housing needs of our working class, they will move out of New York City. If they move away, we will be at risk of losing tax dollars and, more importantly, high-quality workers. It is not cheap to live in New York City, with our tax rate being one of the highest in the country. Add in the high cost of living and many other cities become a lot more attractive – and affordable. If our working class moves, our companies will lose great talent and human resources. We need to do more to keep our working class housed, as they are the backbone of our city.

Instead of focusing only the lower-income population, we need to create a system of “stepping stones” for our working class. This will save New York City from stagnation, while supporting our working class and helping them build a strong financial foundation. By creating more housing for all income levels, we will be providing a road map everyone can strive for. We can outline a plan for almost 600,000 New Yorkers currently benefitting from affordable housing programs, one that will allow these individuals to grow and succeed.

Even with Mayor de Blasio’s housing initiatives, the majority of New Yorkers still spend more than half their income on housing. Millions of people in this city live paycheck to paycheck, scraping by to pay rent. Now is the time to take this conversation to the next level – and put it into action.

Heidi Burkhart, founder and president of Dane Real Estate, is a 14-year veteran of the real estate industry and has facilitated closings in excess of 11,500 affordable housing units and over $1.6 billion in transactions.