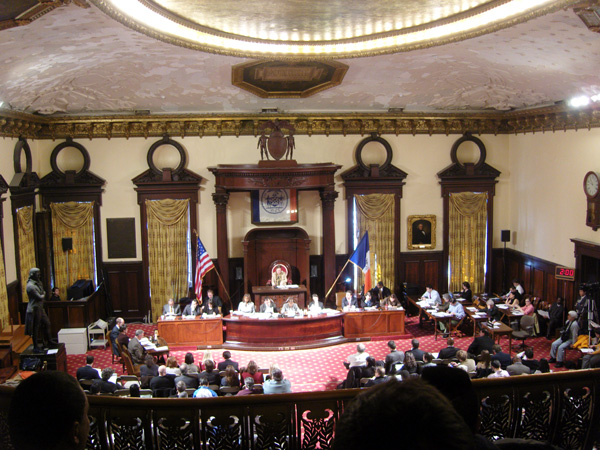 On Tuesday, the City Council’s last meeting of the session—and the last meeting conducted by outgoing Speaker Melissa Mark-Viverito—the Council voted on almost 40 bills referred by a range of committees, including a controversial compromise police reform bill. Among the bills were also a few pieces of long-sought housing legislation that have each gone through some revisions in an effort to address some of the de Blasio administration’s concerns.

Among the legislation are two bills that are part of the Housing Not Warehousing Act, which requires improved tracking of vacant properties—a long-sought demand of advocates who argue that the city will be better equipped to address the affordability crisis with a knowledge of which public properties could be put to a better purpose, and which private landlords must be pushed to stop warehousing their properties.

The original draft of a bill sponsored by Ydanis Rodriguez required the city to conduct a census every year and create a list of the buildings, their owners and how long the properties had been vacant. It did not specify exactly how the census would be taken.

The revised bill requires the city to “analyze” data from a number of agencies in order to provide “an estimate” of the number of vacant buildings and lots “in areas zoned to permit residential use.” It also requires that the city use the analysis to create a list of potentially vacant lots and buildings. The analysis must be redone every five years, with more time to complete the first one, and allows the city not to count lots in coastal flood zones.

Another bill, sponsored by Jumaane Williams, will require the Department of Preservation and Development to report on the vacant lots in its jurisdiction categorized according to the feasibility of developing those lots with affordable housing. The original bill required a broader report on all public land, including city, state, and federally-owned properties, that explained those properties’ current uses and whether they could be redeveloped.

One bill supports the growing movement for community land trusts—a kind of nonprofit entity that acquires land and ensures the permanent affordability of the structures on it. A bill sponsored by Donovan Richards will codify community land trusts into city law and allow them to enter into regulatory agreements with the city. The bill was revised to ensure community land trusts align with one of the city’s existing tax exemption programs: Community land trusts that are eligible for regulatory agreements must be nonprofits that have received an Article XI tax exemption—the 40-year tax exemption also used by Housing Development Fund Corporations. They must also acquire land with the intention to lease structures on the land through 99-year ground lease agreements, and be governed by a specific kind of board including lesees of the housing and a member of the broader community. Advocates are in the process of drafting language for another tax exemption on the state level that would work as a backup to the Article XI.

Other housing bills that made their way toward becoming law include bills addressing indoor hazards that trigger asthma, requiring the city to create an interface that reports on information about property owners, affecting penalties for site safety violations that cause death or serious injury, and more.

The two Housing Not Warehousing bills and the community land trust bill were both approved with 48 in the affirmative and two councilmembers (Republicans Joseph Borelli and Steven Matteo of Staten Island) in the negative.