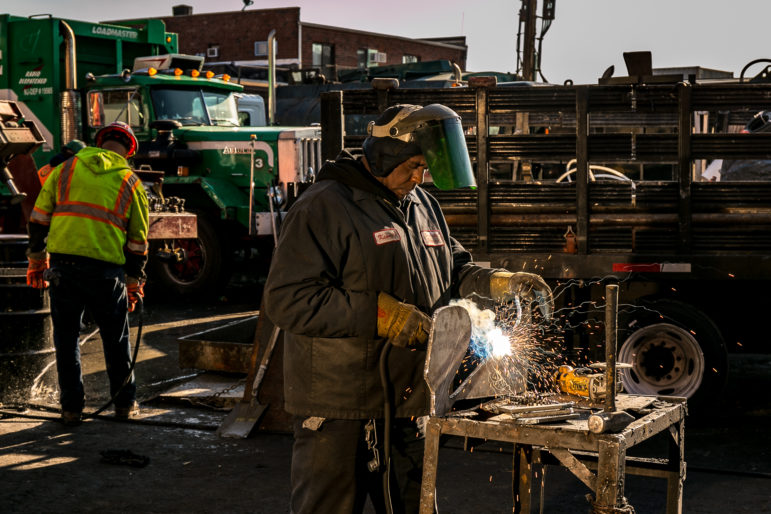 Kenneth Currie fabricating a sanitation truck hook that is used for lifting trash containers. Currie has worked for five years at Sanitation Repairs, a firm that will have to relocate to permit the clean-up of the Gowanus Canal.

The Tagliavia family has been repairing garbage trucks and sanitation equipment in Gowanus since 1973. But their business is among nearly two dozen that will be displaced with the city’s controversial plans to build a sewage overflow tank at the head of the Gowanus Canal.

“A lot of industry is disappearing from Gowanus now and this just contributes to that,” said Salvatore Tagliavia, the owner of a Butler Street parcel that houses his business — Sanitation Repairs — and three others. “We are waterfront property in Brooklyn. To see it developed is one thing but to see it made into a sewage tank is an injustice to the community.”

Department of Environmental Protection (DEP) officials have their sights set on acquiring three private parcels along the toxic canal for an 8-million gallon tank that will divert raw sewage from the waterway after its federal Superfund cleanup.

The controversial plans will repurpose coveted manufacturing land from 19 businesses at 234 Butler St., 242 Nevins St., and DEP will also commandeer 270 Nevins St. where the land will be leased as a staging area during the tank’s construction, which is expected to wrap up around 2028.

A second 4-million gallon tank will be built at a Sanitation Department facility on Second Avenue and Fifth Street at a later date.

The plans would raze structures that contribute to the neighborhood’s eligibility as a historic district under the National Register of Historic Places. This includes the more than century-old Gowanus station building on Tagliavia’s land — 234 Butler St. — whose looming destruction has spurred some skepticism from state officials and locals.

The 1.8-mile long canal was once used as a dumping ground by manufactured gas plants, paper mills, tanneries and chemical plants. Heavy pollutants were discharged into the waterway and sewage from the city’s sewer system overflows have transformed the canal into one of the nation’s most polluted bodies of water.

In 2010, the Environmental Protection Agency (EPA) designated the canal a federal Superfund site to cleanup the long-neglected waters. And once the EPA finishes dredging toxic muck from the bottom by 2027, the city-run sewage tanks will be a key step in keeping the canal clean by sucking up waste destined for the waterway.

The city’s initial plans called for the tank to be built beneath Thomas Greene Park and the “Double D” pool, which resides on contaminated land and will need to be dug up anyway to remove thick layers of coal tar. But DEP fought the EPA to build the tank elsewhere because the city did not want the neighborhood to lose access to a community resource with the years-long closure of the park and pool.

“The city has always had two priorities with the Gowanus canal cleanup: Protecting the Superfund remedy as well as the Double D Pool and Playground for the underserved communities in the area,” said Edward Timbers, a DEP spokesman.

Now, instead of building on the city-owned community space, DEP will give several businesses the boot including mechanics, a plumber, construction companies and the Eastern Effects film studio, which has used the area to film scenes for its 1980s Russian spy series “The Americans.”

Some local activists have railed against the decision.

“I think there is a moral issue here,” said Linda Marino, co-founder of the local group Friends and Residents of the Greater Gowanus at a recent Brooklyn borough president hearing on the project. “I’m not an engineer but it makes sense to me that a tank could be built on another location rather than taking someone’s private property and their livelihood.”

Critics argue that the location is far from ideal, but the two-block stretch of land along Nevins Street between Butler and Sackett streets is the most efficient option for the city, according to one DEP rep.

“The location has the most hydraulic efficiency that maximizes the capture of [sewage]. There are a lot of pluses with this site,” said Mario Bruno, the Assistant Commissioner for Intergovernmental Affairs at a recent land use hearing. “It also allows for a shorter construction period, and rather than destroy parkland, we are able to add open space above the tank and provide waterfront access.”

Several local organizations support locating the tanks under the businesses because taking the park would represent an environmental injustice.

The Economic Development Corporation is already in talks to relocate Eastern Effects to Sunset Park and plans to help the remaining businesses find new homes and help with moving costs once their land has been acquired, said Bruno. 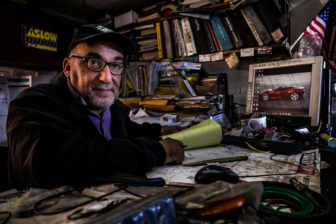 The city aims to purchase the lots — or lease in the case of 270 Nevins St. — but if that fails the canal-adjacent land will be seized through eminent domain. And if the city can’t acquire the lots by 2020 — or meet any of its other timeline goals — the feds will force the city to move forward with installing the tanks under the pool and parkland, according to Christos Tsiamis, the remediation project manager for the Gowanus Canal Superfund cleanup.

That strict schedule could be complicated by the historic Gowanus station building if the city preserves the structure with its unique terracotta pediment that declares “City of New York Water Supply — Distribution Gowanus Station.” And the state is urging the city to take a “hard look at retaining and preserving” the building, according to an October letter from the State Historic Preservation Office (SHPO).

“Its demolition would adversely affect both the building and the National Register eligible Gowanus Canal Historic District,” wrote Olivia Brazee, Historic Site Restoration Coordinator with SHPO, in a letter to the EPA. “To destroy this intact, architecturally distinctive example of Brooklyn’s civic and industrial heritage would be a disservice to the Gowanus neighborhood and to the city as a whole.”

At the very least, builders plan to incorporate the pediment into the new facility’s design but maintain that preserving the building will be a costly endeavor since it will need to be “shored up” to withstand vibrations from the neighboring sewage tank construction, according to Kevin Clarke, a portfolio manager with DEP.

The project area was surveyed by the city’s Landmark Preservation Commission (LPC), which ruled that the 234 Butler Street station house was not eligible for a landmark designation, said LPC spokeswoman Zodet Negron. But the city is still reviewing the possibility of preserving all or part of structure, partially at the state’s urging.

An environmental impact statement for the project noted its potential effect on the area’s historic and cultural resources, but the loss of 19 businesses to the local economy did not raise red flags, explained another DEP expert.

“We didn’t identify any socioeconomic impacts because the businesses that are there are of a nature that could be expected to relocate to available sites nearby and they don’t provide — collectively — services that are essential to the local economy,” said Terrell Estesen, the director of wastewater review and special projects, at a recent Community Board 6 land use meeting.

That view does little to lessen the blow for those forced out of their spaces.

“I’m glad this tank will help the canal, but what about the small guys like me? They need to think about us too,” said Sheepshead Bay resident Anton Spitsin, who sold his apartment to invest in his three-year old company, The Environmental Recycling of NY Corp, which recycles bottles and cans. “I believe in this business. It’s important for the environment, to the community who comes here to trade in their bottles. But what can I do? If I have to go, I’ll go.”

Resources for the area’s arts could also take a hit with the loss of Spoke the Hub’s Gowanus location, an arts non-profit that offers rental space for artists and performers and classes from actors workshops to Hawaiian dance to yoga sessions. The site is not a permanent location for the group but it would be a severe hardship for Spoke the Hub if it had to relocate within the next year, according to a representative with the non-profit.

It’s hard for some locals to stomach the losses when the sewage tank will only reduce the amount of raw sewage spewing into the canal during heavy storms and not eliminate it entirely.

“I think it’s pretty crazy. All this is happening and it’s still not going to be completely clean,” said Karen Gibbons, who lives and works directly across Eastern Effect’s film studio on Nevins Street. “In a perfect world the canal would be 100 percent clean without fecal matter.”

As part of the Superfund cleanup, the EPA will dredge the canal’s infamous “black mayonnaise” — a 10-foot layer of toxic muck at the waterway’s bottom — which will be followed by a process known as capping that will lay two feet of sand, clay and other granular materials to prevent contaminants from migrating up into the water.

After the Feds $506 million cleanup, the tank at the head of the canal and the smaller one off of Second Avenue, which will cost an estimated $825 million, will sop up 119 million gallons of sewage annually. This will reduce the flow of waste from approximately 130 million gallons per year to only 11 million — a more than 91 percent reduction, according to Walter Mugdan, the Superfund division director for the local EPA region.

But still leaves more than 16 Olympic-sized swimming pools’ worth of sewage streaming into the canal each year. The projected costs could continue to rise if the city moves to preserve the Gowanus station building or if the project hits any unexpected bumps along the way. 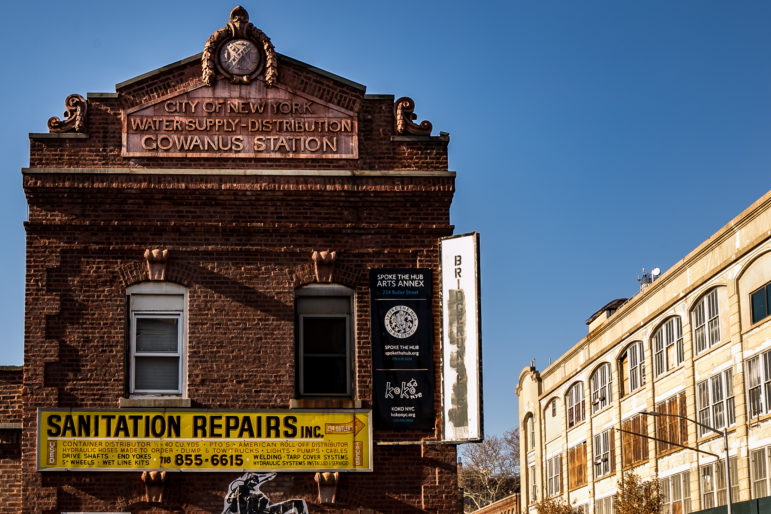 The state is urging the city to take a 'hard look at retaining and preserving' the building, according to an October letter from the State Historic Preservation Office (SHPO).

Clarification: Changes were possible at 234 Butler Street, where Tagliavia’s company is located, before it became part of the site for the sewage tank. Tagliavia had plans to lease his land to a development company for a commercial project that could have included green space, which would have forced his industrial business to relocate (and resulted in the loss of its possible historic merit.) However, those plans, which he says were initiated by the developer, did not come to fruition because of the city’s interest in the land. Now Tagliavia is focused on maintaining the lot. Complicating any project on the parcel is the fact that the land under Tagliavia’s facility is also contaminated by pollution from the same long-vanished Manufactured Gas Plant that contributed to the poisoning of the canal and the contamination under the “Double D” pool. The land will require remediation before the tank facility can be built.

12 thoughts on “Gowanus Sewage Cleanup Will Clear Out Several Businesses”