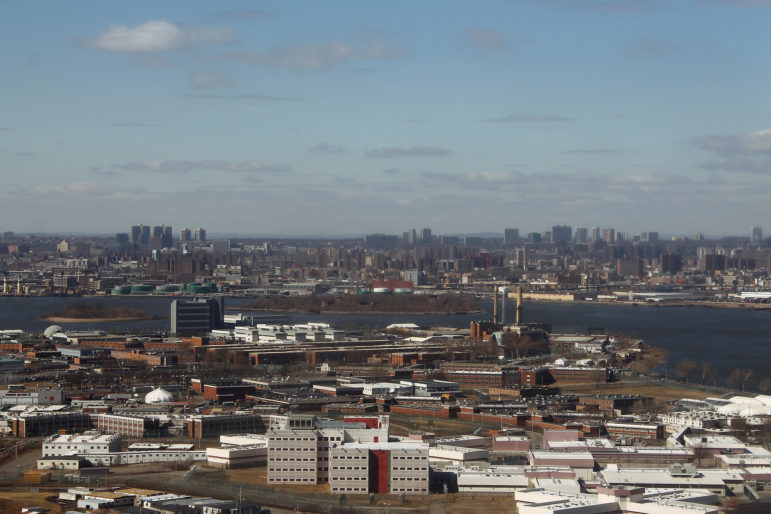 There are 10 jails on Rikers Island holding the bulk of the 9,500-odd detainees and inmates in New York City custody each day.

It’s impossible to change the future some say, you just create alternate futures – according to my favorite Aston Kutcher film, the Butterfly Effect, which is tonight’s film playing at one of New York City’s oldest problems: the deteriorating illness called the Manhattan Detention Complex.

I sit here in the clinic watching the old officers coach the new ones on how to write up infraction reports that will get them injury time, how to be nice and smile to the doctors so it all corroborates their peer’s reports. Alarms are the new overtime and sick pay here; all day long the air is thick with chemical restraint. In the hallway bridging two towers, a floor of blankets and sheets catch the leaking building’s tears of distress.

I’m proud of the City Council’s support in closing Rikers and I’m proud that years and years of our work is finally bringing an end to Rikers Island, but just like an alternate future spawning before my eyes, there is a passing of an old culture – bodies, packages, inmates, this is the language that dehumanizes the thousands of New York citizens only detained for court, the $200,000 plus we pay per person gets us not even enough phones for each person on the tier to make a call each day, not enough jumpsuits for people to have visits, people left alone so long they fish out their windows down to the street below.

Sitting here watching the CO sleep I’m reminded that soon there will be rules with no change of culture, no matter how many problems we rally and write about the facilities will continue to create conditions to feed ESHUs and find new ways to spray children 17-18-19 years old in their cells. Same mayor, same problems – still just another alternate future where more black and brown kids are fed up to the rural counties as population after pleading out, where too…alarms and lockdowns are the new overtime.

Five Mualimm-ak is an activist, writer, survivor of solitary confinement and the Director of Incarcerated Nation Corp. He is currently incarcerated in NYC DOC for violating a court order related to a failure to pay child support.

On December 4, the New York City Council Committee on Fire and Criminal Justice Services is holding an oversight hearing on the City’s progress in shutting down Rikers Island, one of the largest jail complexes in the United States.

2 thoughts on “CityViews: The Need for Correction Reform Goes Beyond Simply ‘Closing Rikers’”