A New Housing Resource for the Region, Right in the Parking Lot 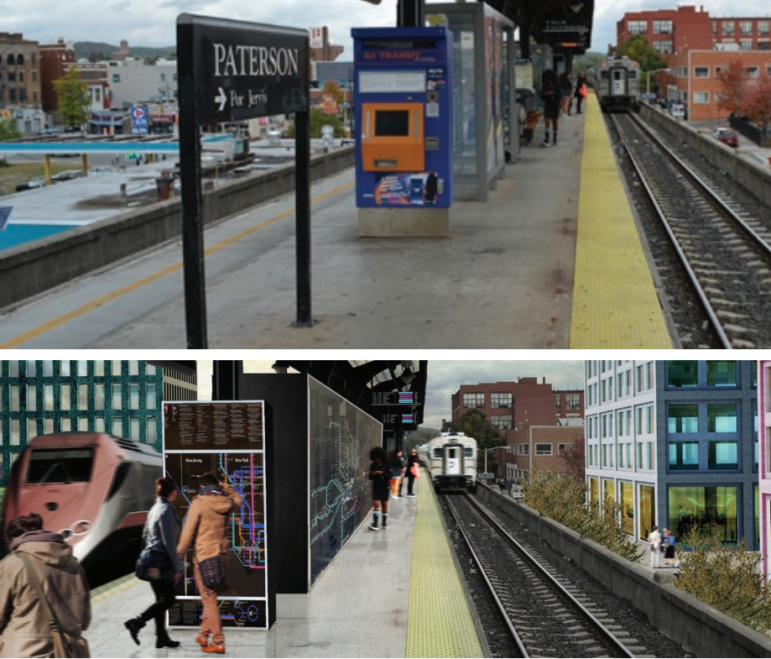 Paterson, N.J., today and in a potential future when parking lots become sites for housing and commercial development.

Joni Mitchell wasn’t happy that progress meant paving paradise and putting up a parking lot. Now the parking lot might be on its way out if the New York City region is going to fulfill its potential to provide affordable housing.

A report by the Regional Plan Association estimates that homes for 662,000 people could be created if the parking lots at dozens of commuter-rail stations were transformed into walkable neighborhoods offering housing and retail. But it will take changes in local zoning laws, as well as evolution in how cars are used, to make that potential into reality.

RPA looked at all 349 regional commuter rail stations outside of New York City along the Metro-North Railroad, Long Island Railroad and NJ Transit lines. Many of those stations are but an hour’s ride from Midtown. Those farther away from Manhattan are usually closer to a regional economic hub.

As the use of on-demand, shared and autonomous vehicles becomes more common, those large asphalt plains might fall out of use—unless municipalities seize the opportunity to use that space for housing.

Not every rail station is right for development: 85 of the stations are not in an area with sufficient sewer capacity to support new development. But that leaves 264 others. Each lot is different, and ideal development would look different case to case: In some towns, townhouses and other low-rise development are in order, while in a few cases, new downtowns might make sense.

But at more than half the sites that would be appropriate for development, local zoning laws are a major obstacle because they prohibit “anything more than low-density multifamily development,” according to RPA. “Fully 25 percent of those surveyed do not allow multi-family housing at all.”

Changing those restrictions—which are more prevalent in whiter, more affluent suburbs—is a key step, says RPA. So is making sure that a healthy portion of the new housing is income-targeted or “affordable.”

RPA’s study focuses on areas outside the city. But one map does indicate where there is at least theoretical potential for transit-oriented development within the five boroughs. RPA found, “There are currently over 6 square miles of land within a 10-minute walk from a subway or rail station which prohibit multifamily housing – an area about the size of Manhattan below 34th street.”

According to a map, these areas included several pockets along the Staten Island Railroad corridor, a patchwork of neighborhoods in eastern Queens and the Riverdale section of the Bronx.

So far, most of those areas would not be affected by the city’s rezonings, which aim to add density to parts of the city that can absorb it. 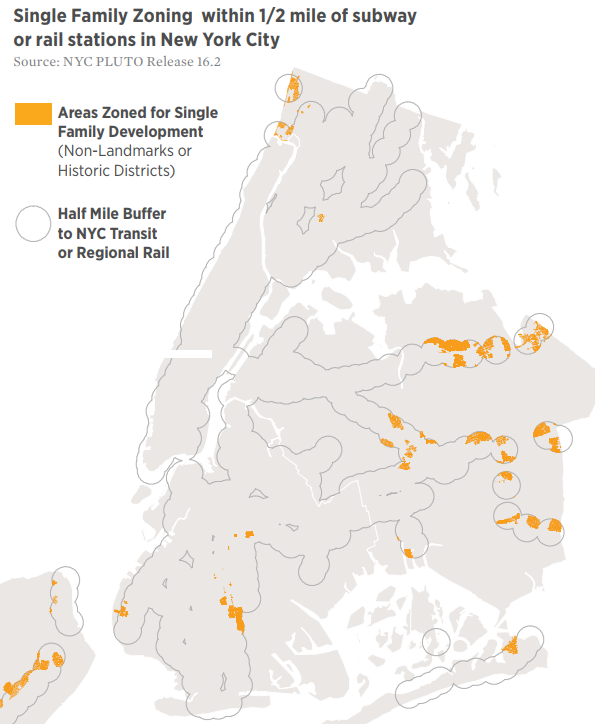 The orange sports are sites in the city within a 10-minute walk from a subway or rail station where current zoning prohibits multifamily housing.

2 thoughts on “A New Housing Resource for the Region, Right in the Parking Lot”