“Although Hunts Point was largely spared during Hurricane Sandy, the City realized the need for additional resiliency investments to safeguard it from future events,” NYCEDC President James Patchett told City Limits in an emailed statement. “That’s why we’re working with the local community on projects like flood prevention and strengthening the FDC’s power supply, to make sure we’re prepared for the next storm.”

During a conversation with NYCEDC representatives, NYCEDC acknowledged that it would send its operations “SWAT team” to rescue individuals, initiate an evacuation plan and protect the most valuable mechanical equipment and resources in an extreme environmental or manmade emergency. NYCEDC also says that it would share its fleet of generators with businesses.

However, NYCEDC says, it is the responsibility of individual businesses and the three cooperative markets to implement their own individual preparedness strategies.

Darkness is the bigger danger

In the absence of an overarching strategy, businesses and the markets have pursued various resiliency strategies on their own — some more thoroughly than others.

An army of laborers unload pallets of pork, poultry and pepperoni by the ton at the vast Hunts Point Cooperative Market, which handles millions of pounds of meat each day. The meat market contains six long loading docks labeled A through F as well as additional warehouses for large distributors like Nebraskaland. Union laborers dressed in heavy coats lug bulk packages of meat into refrigeration units as they arrive and pull them back out for buyers who flock to the facility from dusk to dawn.

The complexity of operations, the challenge of coordinating thousands of individual distributors who visit Hunts Point from around the world each day and specific federal regulations related to food storage all prevent the behemoth meat market from setting up temporary shop somewhere else in the event of an emergency, manager Bruce Reingold says. Individuals businesses can, however, develop their own contingency plans, such as storing their product in off-site freezers and distributing elsewhere.

From his office window overlooking loading docks B and C, Reingold points to the powerhouse station—a tan, windowless building located near the market entrance—and says the market awaits construction of a new cooling tower and back-up generator that will enable resiliency at the site. The market runs on the city’s grid and powerhouse substation contains a large cooling tower, two central boilers and four electrical feeders that manage the flow of electricity through the market. 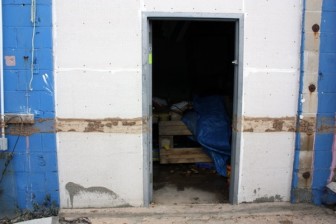 A sandy line marked Sandy's reach in Coney Island a few days after the storm.

Reingold says he hopes the generators will be operational by Spring 2018. Meanwhile, the City has supplied large sand bags and inflatable dams to protect the existing powerhouse infrastructure in case of a flood.

“It’s a major priority here for us to have the generator,” Reingold says. “As soon as it’s here it’s here, but it’s been years for us trying to get the funding and finally we got that done and the city is on board.”

A power outage that lasts even ten hours would be a “big problem” for the market’s 700,000 square feet of refrigeration, Reingold says.

“As the main supplier of fresh meat in the Tri-State area, our customers would do the best they can to get product temporarily, but it would be a major disruption,” Reingold says. “If we ever lost total power without a backup system, we’d have nothing. A back-up generator here is absolutely critical.”

Elevated loading bays throughout the meat market mitigate the risk of flooding, but the electrical system running beneath the market remains vulnerable, Reingold says.

“Most of our infrastructure is underground so [flood water] could have shut down the market for an unknown period of time,” Mosner said at the time. “When there’s an electrical outage [as there was during the 2003 blackout], we just have to keep our doors shut and hope refrigeration lasts as long as possible.”

NYCEDC says it has worked to seal vulnerable locations such as underground utility corridors and electrical equipment.

When contacted by City Limits, Mosner said that in his view, individual businesses at the Cooperative Market lack emergency preparedness plans.

“Out of all the businesses in the market, even established ones, I’m not sure if there are hard contingency plans [in case of disaster],” Mosner says. In 2016, Mosner said his company contracts with facilities in New Jersey to handle excess meat that will not fit in its Hunts Point location.

Reingold also says he is unaware of a meat market business that has established a model contingency plan.

Six Cooperative Market tenants contacted by City Limits say they do not have emergency plans in place for how to divert their products to other facilities or maintain operations in case of power outage or flood.

Inside the administrative office of one meat market wholesaler, an executive said his business has no plan aside from using “common sense” to evacuate staff from the area and “calling 911.”

“We’ve been in business 50 years, but we might have to pack it in if there’s no power,” he says.

Nearby, the Terminal Produce Market benefits from some of the same built-in protections—like elevated loading docks—and faces some of the same vulnerabilities as the meat market, though it is further from the current floodplain.

“Our markets are old, the cost of power is astronomical and refrigeration is ancient and needs to be redone,” Market Manager Myra Gordon said at the Hunter College event.

Some of the necessary renovations, like improved lighting, are already underway. The Food Distribution Center has also used $150 million it received from the City Council in 2015 to repair some aging facilities and conduct environmental remediation.

In addition, the NYCEDC has begun coordinating with the produce market to successfully navigate power outages.

“We are currently working with the produce market and we will be working with the other markets as well to update their continuity of operations plan,” Stein, the NYCEDC vice president, said at the Food Policy Center panel. “[We are] looking at what their plans are for different types of emergencies and thinking about how we integrate all our plans together.”

Stephanie Katzman, a manager at S. Katzman Produce—a fourth-generation produce distributor and original Hunts Point tenant that receives food from around the world and distributes to vendors from Massachusetts to Maryland—says she thinks her fellow wholesalers consider contingencies.

“Each company has its own plan set up,” Katzman told City Limits. “We have a couple different processes and plans off-site, in New York City and elsewhere.”

Though the New Fulton Fish Market sits much closer to the water than the other cooperative markets, existing coordination among businesses would benefit the market in case of flooding or power outage, says Guerra, the fish market manager.

Unlike the meat and produce markets, where individual businesses have their own loading docks for trucks, one unloading team handles all the seafood at the fish market and distributes among the businesses inside the warehouse, Guerra says. The businesses then distribute to buyers waiting with trucks or vans in the parking lot.

“I call it a Chinese abacus because of the way it flows,” Guerra says. “It’s hard to teach an abacus but the idea is that things work in a unique way that is not chaotic.”