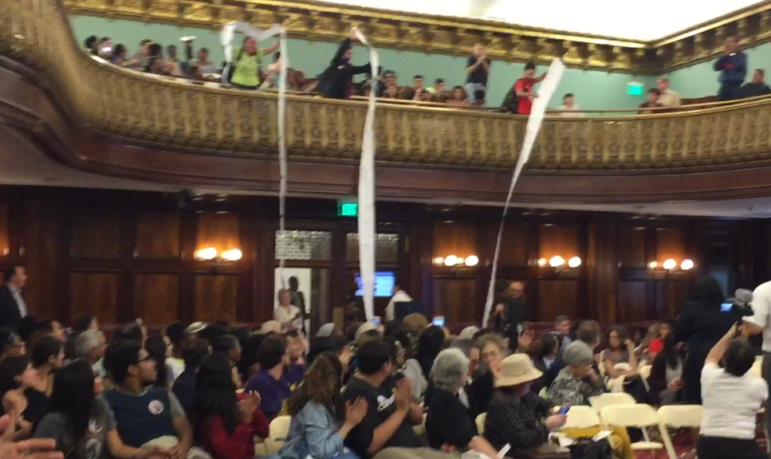 Given the protests that disrupted meetings last November and again at the community board’s hearing in May, it seemed likely that the City Council’s hearing for the controversial East Harlem rezoning proposal would not go down without action.

Indeed, about 40 minutes in to the city’s presentations, three members of the Justice Center en El Barrio dropped a stream of petitions—organizers said they collected 3,000—from the Council Chambers balcony while chanting “El Barrio Not For Sale.” They were escorted out, and a large portion of the crowd, many of them students and adults from New Design High School, stormed out with them.

Later there were couple terse exchanges between anti-rezoning testifiers and Melissa Mark-Viverito. Though many left before they could testify during the four-hour hearing, more than 30 people spoke against the city’s plan—some calling for the East Harlem Neighborhood Plan, which would create less new density, and some against any rezoning at all—and only two or three spoke in its favor.

The proposal is the third of de Blasio’s neighborhood rezonings to go through the seven-month public review period known as the Uniform Land Use Review Procedure (ULURP). The Department of City Planning (DCP) says its rezoning is based on the East Harlem Neighborhood Plan created by local councilmember and Speaker Melissa Mark-Viverito, Borough President Gale Brewer and a team of steering committee members, but those stakeholders have said the city’s plan differs too significantly from their own. Other groups have spoken out against any rezoning at all and instead called for alternative strategies to address the affordability crisis.

Over the course of the next month, it is expected that the speaker will continue to negotiate with the administration on the details of the plan—and, as she explained at the hearing, hold another public meeting with the community—before eventually bringing the proposal to a vote.

Mark-Viverito, who will cast the deciding vote on the project as one of the last actions of her three-term service in the Council, made her position clear throughout the afternoon: She supports the East Harlem Neighborhood Plan’s recommendations, and will be working to make the city’s plan more like it.

“While the Department of City Planning has responded to the community’s proposal with similar zoning districts in several areas, there are key exceptions,” she said in her opening statement, noting the greater levels of density proposed by the administration on Park and Third Avenue and the exclusion of other areas that the steering committee recommended also be upzoned at modest levels. She also justified the necessity for some kind of upzoning, saying that current zoning does not require any kind of affordable housing on privately owned sites.

“It is important for the public to know that the Council will consider their feedback closely as we determine what changes need to be made to the Department of City Planning’s rezoning proposal,” she added. “And again, as I’ve indicated—and there may be people here who are opposed to the planning and the rezoning and are misrepresenting my position particularly—I am committed to the East Harlem Neighborhood Plan and the recommendations that came out of that. So that’s a very clear statement on my part. It’s also important to emphasize that it is my intention to continue to advocate for specific commitments and investments in the priorities that the Steering Committee has identified.”

Updates from the administration

Officials from DCP and the Department of Housing Preservation and Development (HPD) repeated much of what they’ve said over the course of the process—that their plan takes a balanced approach, encouraging transit-oriented development near subway stations while preserving the character of some blocks and requiring commercial ground floors to encourage economic activity, and that the rezoning comes with a “robust and aggressive housing plan“ as well as a variety of investments in health services, good jobs and training programs, transit improvements, parks, and schools. (View their presentation here.)

Additional income-targeted apartments that will be subsidized in area: 2,600*

*Critics say the city may be underestimating the number of sites in the neighborhood that could be subject to redevelopment by, for instance, assuming that most rent-stabilized buildings and houses of worship would not be torn down. A revised method could affect all three of the first estimates (in addition to affecting how many people could be displaced). Critics have also taken issue with the fact that the number of projects that will be subsidized in the area include developments already underway or that have long been in planning.

But there was also something new: HPD is now requiring that on all publicly owned sites, the city has a “remainder interest,” giving it the right to take back the property if the developer refuses to renew its affordability regulatory agreement—one of several new legal fixes introduced by HPD in recent years to better ensure permanent affordability.

“It puts the city, it puts the public in the driver’s seat at the end of that regulatory period to ensure that affordability will continue, and that’s something that we have just started incorporating into our most recent [Request for Proposals] that we issued in August and September and will be incorporated into all our [Request for Proposals] going forward,” explained HPD’s David Quart.

Officials also called attention to some other changes since the start of ULURP: the addition of height limits so that nowhere would new buildings rise taller than 32 stories, the addition of a greater share of subsidized units at the 126th Street Bus Depot project, and increased collaboration with the East Harlem/El Barrio Community Land Trust.

“It’s not a stagnant process,” said Mark-Viverito, noting that the proposal had already changed since it was voted on by the community board and borough president. In the minutes that followed, she asked the officials for more details on how the city is proactively approaching preservation, connecting residents to lawyers, prioritizing nonprofit developers, preserving NYCHA, and thinking about the risks to rent stabilized buildings on 2nd Avenue, among other questions.

Land Use Committee Chair David Greenfield and Zoning Chair Donovan Richards asked the officials to once again spell out what would happen if no rezoning were to take place—in what seemed to be an effort by both men to show the audience that no action was not an option. (DCP’s Purnima Kapur: “If we not do anything today, the community will not get is share of affordable housing that is desperately needed here.”) Greenfield also suggested that the protest was a testament to the city’s thorough community engagement process—triggering outraged laughter from the public.

Voices for and against

The three people who spoke in favor of rezoning had some sort of vested interest in development. 32BJ wants the building-service worker jobs that new buildings will bring, so long as developers commit to paying industry-standard wages. Daria Fane with the Fane Organization, a real-estate development company that owns land along Park Avenue, said the avenue “desperately needs” a rezoning—and the higher the density, the better. Another commercial property owner who had been excluded from the rezoning asked “How can I get my share of upzoning for commercial development which is badly needed?…Housing housing housing….but where are the jobs?”

Brewer was first to testify “in opposition to the proposal but for the neighborhood plan,” as did a few other members of the steering committee. New York Academy of Medicine, Municipal Arts Society and others reiterated their concerns that the city’s environmental impact study underestimates the number of renters who might be displaced by the market changes hastened by the rezoning. Both Brewer and a representative of Landmark East Harlem said that the Landmarks Preservation Commission had not followed through with stakeholders’ requests to considers buildings in East Harlem for landmarking, though the commission had landmarked buildings in East Midtown before that rezoning passed.

Many others expressed concerns that the 70 to 80 percent of units that would be market rate in the rezoning areas (excluding those sites where subsidies are used to reach deeper levels of affordability) would exacerbate housing pressures, displacing native Black and Brown residents, and that the “affordable” housing that the plan would create would not actually be affordable to East Harlem residents. There were calls for the passage of the Housing Not Warehousing Act, and questions about why investments in neighborhood infrastructure needed to be tied to a rezoning at all. (DCP’s Kapur, however, emphasized that the city’s preservation plan—”is happening regardless of whether the zoning happens or not.” It was not clear by press time which of the city’s promised investments are contingent upon the rezoning and how many are not.)

A few residents expressed concerns that the administration is overestimating the potential of its bureaucracy to handle the displacement pressures they believe will be exacerbated by the rezoning.

“I love the power point presentations that the city always comes with but it’s not realistic,” said resident and tenant paralegal Pilar DeJesus, describing the challenges of enforcing tenant protections in court. “The city cannot handle the issues that they already have right now.”

Anti-gentrification allies from Inwood and Queens added their voice to the chorus, as did political candidates from East Harlem and beyond, including Daby Carreras, who is running against Mark-Viverito’s aide Diana Ayala in the general election for the district. Carreras, who will appear on the Republican, Reform, Stop de Blasio, and No Rezoning 4 Ever party lines, took his opportunity at the mic to make a far-ranging campaign speech in which he dubbed himself “the next city councilmember for the 8th district” and swore “I’ll win and I’ll stop the rezoning and I’ll stop you and I’ll stop De Blasio.”

Residents also raised issues about the process itself. Those who would like to see the city’s plan better resemble the East Harlem Neighborhood Plan can still have hope that the speaker will fight for them, but those who want no rezoning at all are reckoning with its inevitability.

“I have been to too many of these meetings where 80 to 90 percent of the room are against the plans of rezoning but still votes are being passed ‘no with conditions,’ ‘yes’,” said Juan Peralta, a member of the Justice Center. Resident Marina Ortiz accused Mark-Viverito of not actually engaging in a “point-by-point” debate about the rezoning, while members of Movement for Justice in El Barrio decried that the hearing had been held when their members were at work and asked Mark-Viverito to hold a hearing in East Harlem at a time they could attend.* The speaker said she would be holding another meeting in East Harlem.

*Correction: Originally said the Movement had accused Mark-Viverito of not meeting with them during their testimony. In fact, this was not the subject of their testimony.